posted on Dec, 8 2012 @ 11:40 PM
link
As we are nearing 2013, the western mainstream news outlets are still defending the Free Syrian Army by proclaiming them as the Rebels against a brutal oppressed regime of Assad.

There is no evidence yet that the Syrian military has actually begun the process of mixing precursor chemicals to produce deadly Sarin nerve gas, a senior defense official told NBC News on Tuesday.

According to the official, despite the increased activity around several chemical weapons sites, including truck movements in and out, it’s not even clear that the precursors have been moved from separate storage sites to one location.

After three days ago, NBC again quoted a nameless source this time without mentioning whatever he or she they are from the Pentagon.


The Syrian military is prepared to use chemical weapons against its own people and is awaiting final orders from President Bashar Assad, U.S. officials told NBC News on Wednesday. The military has loaded the precursor chemicals for sarin, a deadly nerve gas, into aerial bombs that could be dropped onto the Syrian people from dozens of fighter-bombers, the officials said.

Yet Jim Miklaszewski at 00:18 provided no names for these nameless sources or officials which Jim is quoting them from.

This is the satellite image from NBC they are trying to convince people and the general audience that Assad has the WMDs.

Which reminds me of this from Iraq.


Remember this truck that claimed it was leaving for Syria or Iran? 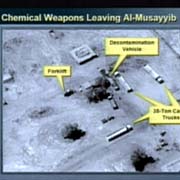 Why does the truck in the image seem so empty?

And now the western mainstream news outlets and our western governments are playing the Iraqi WMD card excuse which no doubt in my mind would it be used to start an military intervention which i doubt that would happen but it does seem likely and the rants from Sen John McCain recently.

CNN Obsession with Syria and the FSA
Since the start of the conflict CNN, The guardian have been seeming to be obsessed with the Free Syrian Army and every inch that might claimed to be the end of Assad, lets not forget that CNN own Andersoon Cooper faked the interview with Danny Abdul-Dayem.

Who has since the last interview gone strangely quiet the last time that we heard from Danny Abdul-Dayem was the moment he came into Homs.

Since this July around the time when the Battle for Damascus, other wise foreknown as the Damascus Volcano our news outlets were cheering that and claiming that the end for Assad was close and were coming to an end.

Even some other news outlets were reporting the same thing.

No going back in battle for Damascus: rebels

What has changed since July and the six months? nothing at all, CNN reporting is still the same as before and acts just like Guardian.

CNN on Friday Proclaimed the end of Assad was near.
Syria's endgame in sight as rebels advance
Notice in the article how they use a nameless supposedly resident who lives in Damascus? much of the article seems to be propaganda in the way it was written just an example take a read here.

This account cant be verified i am sure if the Journalists and activists say it must be true.
Syria’s endgame in sight as rebels advance

the military has gone house to house and shot dead entire families.


Children, they say, have been abducted, tortured and killed and dumped on their parents' front door. There are allegations of underground torture facilities across the country.

Does that seem like a fair journalistic report? no it doesn't. Although the article does sound desperate in the way it was written to make the general audience public believe this is what is happening in Damascus. The other laughable part of the article is this nameless Leena character where she claims.


It's loud and scary in Syria's capital. But now, this week, something seems different. It feels worse. And that makes Leena feel better.


Leena, a former teacher in her 30s, told CNN that she's hearing more helicopters hovering over her home this week.

And why i dont believe this article? its because of things that were horribly written.

"The worse it gets now, the more we know the rebels will win," she said. "We welcome this fight. It means we will wake up from this nightmare."


Damascus is the seat of al-Assad's power. Rebel forces seem to be fighting harder than ever in the capital and, according to analysts and on-the-ground observers like Leena.

In the past several weeks, the rebels -- once disorganized, dysfunctional and poorly armed -- have made major strategic and psychological gains.

They have seized control of key oil fields and territory in important areas of the north. They have audaciously fired on the Damascus airport and downed several military aircraft.


See what CNN did there they have cited several articles all citing the unreliable the Syrian human rights observatory, regrading the claims that the FSA captured an territory in important areas of the north.

posted on Dec, 9 2012 @ 12:11 AM
link
As CNN and other MSM outlets Proclaims Gains for the FSA, CNN, New York Times and the Canadian Global And Mail newspaper have defended the news regrading the new selected new Islamist-dominated command they have completely left out the facts that the new rebel command are made up of Islamist-dominated command with the aid of the MB.

I was pretty much surprised today to see that the Global and Mail, NY Times and CNN completely leaving out any mentions that the new Rebel Command that was formed in Turkey are all Islamists with Islamist backgrounds.

From Reuters and times India.

I bold out the important lines which you will see in the similar articles by NY Times and CNN, others.


The 30 included many with ties to the Muslim Brotherhood and Salafists, and excluded the most senior officers who had defected from President Bashar al-Assad's military, they said.


"We are witnessing the result of the Qatari and Turkish creations," the delegate said, adding that the 30 are a mix of officers who had defected from the military, which is dominated by Assad's minority Alawite sect, and civilians-turned rebels.

Here's a similar article from few other news outlets without mentioning the Islamists.


The Supreme Military Council, which was chosen Friday during a meeting in Turkey, will work with the political leadership that was chosen last month in Qatar.

Here's CNN article where it completely mentions no Islamists nor that Al Norsa Front group.

And CNN's own article completely makes no mention that this is the result of the meeting they had in Qatar just while over a few weeks ago.

The telegraph reported something quite distributing, but not surprising.

The Muslim Brotherhood has established its own militia inside Syria as the country's rebels fracture between radical Islamists and their rivals, commanders and gun-runners have told The Daily Telegraph.


The only news network that is supposedly waking up to realize that the FSA arent going to Bring Freedom nor Democracy is CBC, even though they to are cheering for the FSA but this article was interesting to read.

Its pretty clear what is happening in Syria there is a major Psychological Operation Against Syria by claiming that the Free Syrian Army are winning and are gaining and that the noose tightens on Assad, with the general mainstream news outlets cheering for the FSA like the guardian, CNN.

Haven't they learned anything from July and these past six months when it comes down to there own reporting on Syria?

posted on Dec, 9 2012 @ 01:04 AM
link
Thanks for the run down......ive been wondering about some of those claims that dont seem to match with the situations
on the ground....
The rebels may be unifying their command stucture, but i think there are some deep divisions being put aside till the goverment is defeated......
I fully expect there will be another power struggle(perhaps equally or even more bloody after this conflict is resolved.)..
I was wondering, if you think it may be a possibility that the WMD thing is being stirred up because of the rebel positions surrounding (supposedly) the damascus airport?
I was thinking its a good place to land a bunch of foriegn troops to help the rebels out, under the guise of seizing chemical weapons before they get used...?
If the airport falls into the rebels hands ill bet that what will be on the agenda....
.

As we are nearing 2013, the western mainstream news outlets are still defending the Free Syrian Army by proclaiming them as the Rebels against a brutal oppressed regime of Assad.

Of course! To claim otherwise would mean that killing Osama Bin Laden and other leaders in Pakistan didn't mean a thing and made the Muslim extremist situation worse. We can't have that? Can we? Wouldn't saying otherwise be admitting defeat on the war on terror?


I think there's something more sinister going on here.

As for the Muslim Brotherhood, they've always had a huge presence in Syria. It was just a matter of time before they kicked this faction of Shiite government to the curb, since this Shiite presence is actually smaller than the Sunni presence in Syria.

Islam in Syria comprises 87% of the total population. Sunnis make up 74% of the total, mostly of Arab, Kurdish and Turkish ethnicities. Shia's make up the remaining 13%.

There's a message being sent out here from the Muslim Brotherhood and Al Qaeda to the rest of the Middle East.

In their minds, it's time for "political Islam" to take over!