Do you know where the rainbow starts?....

Now, I know where it starts:
It starts at "Camden Haven River", approx 350 km north of Sydney, Australia: 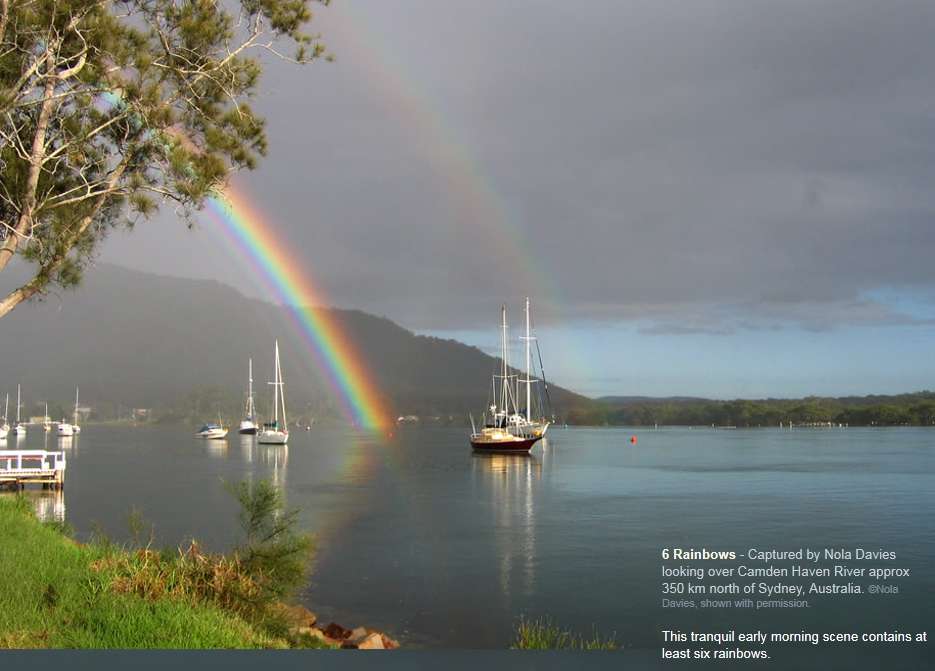 Credit to "Nola Davies" and atoptics

THIS incredible snap must be worth a pot of a gold.
That's because there's a stunning SIX RAINBOWS captured in just the one pic.
The photo, described as the "sight of a lifetime", was taken by Nola Davies from her home overlooking Camden Haven river, two hundred miles north of Sydney, Australia.
She thought she had captured four rainbows and sent it to British-based atmospheric optics expert Dr Les Cowley who identified two more in the one frame. Dr Cowley said: "Over the years many other strange and unexplained rainbows have been reported but without good photographs it's hard to know what was really seen. Nola's six are a sight of a lifetime though."

Nola explained: "I was with my husband John and we were only aware of four rainbows at the time.
It was early morning with the sun roughly from the right hand side downriver."

Some of the extra rainbows that can be seen appear to be reflections, but they are actually caused by sunlight reflecting from the water and hitting different raindrops from the initial bows.
Dr Cowley explains: "All rainbows are made when sunlight is reflected inside falling raindrops.
"The bow we see most often and the brightest one in Nola's picture comes from just one reflection inside almost perfectly round raindrops.
"All but the largest raindrops are round and not at all like the teardrops commonly pictured.
"The outer bow, the one we also see sometimes, comes when sunlight reflects twice in each raindrop.
"Now we enter the territory of rare and unusual events.
"A third bow crosses the two brightest ones. That was made from sunlight first reflected upwards from the river before reflecting once again inside the raindrops.
"To raindrops it looks as though a second sun is shining upwards from the water. To have a chance of seeing this bow you need a large sheet of calm water in front or behind you.
"The bright upside-down bow in the water is not an ordinary reflection of the one in the sky but it is made by rays of light from a different set of raindrops bounced upwards by the river.
"Bow five needs even more reflections two from the river and one inside the raindrops."
The last rainbow is barely visible, but Dr Cowley insists it is there if you look hard enough.
He added: "Bow six, of which Nola's camera has caught just a faint fragment, is from one river reflection and two more inside raindrops.
"It is so faint because of the many reflections and because its colours are spread out."