Well, we have heard it all now, or have we?

This weekend Ancient Aliens kicked off its 13th season with a review of efforts to get the federal government to release its treasure trove of documents and data on what really happened at Roswell, Area 51, etc.

Among the conspiracies promoted in this new (ahem) “documentary” is the suggestion that the real reason Hillary lost an impossible-to-lose campaign in 2016 wasn’t the Russians or the FBI. It was aliens.

At least when you blame Republicans, or Russia we know they
really exist...But aliens?

And yes, there was that little glimpse of Podesta's coordination with
Blink-182's former guitarist Tom Delonge, but no one stopped that
from getting out, right?

Still though, its aliens!

“Secretary Clinton was also interested in the topic” Podesta said.
“if elected, she would have ordered a more thorough declassification review,”

After this statement from Hillary’s campaign manager, the show’s narrator intones: “Many believe that if Clinton had won, there would have been a seismic shift from the government’s long-held policy of secrecy concerning UFO investigations to a new policy of full disclosure.”

Well, call me a skeptic on this one!

And how do we know, maybe the aliens decided they didn't like her?
Maybe there is more truth to this picture than we really know? Who's next, she will blame Slick Willy's secret alien lover? 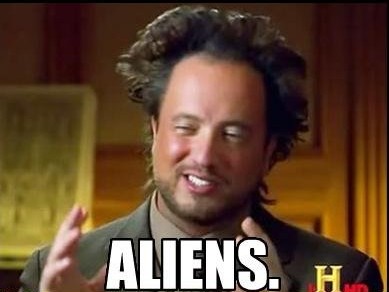 It's just so pathetic, so desperate.

David Wilcock weighed in on this episode: These people are worse than useless.

Our leaders and political people are ree-ree.

They are afraid they'll catch the ree-ree from our political overlords.

And they're probably right!

originally posted by: Rosinitiate
Trump takes back the world from our reptilian overlords.

I can go with this.

I had to look him up....but that says alot.
Smart guy, not wanting to be associated with this.

Oh dear... is this Podesta's way of setting up an insanity defense?

Just in case of course...

The Clinton's have certainly had quite a stormy relationship with Aliens. Oops, wrong one, my bad. So, let me get this straight - you're tellin me that Hillary won the popular vote, not because of sock puppets and dead people, but because 'aliens', but somehow the stupid low-info aliens forgetted bout da electoral college thingy therefore the lying slag lost?

If we read in between the lines "aliens" is referring to illegal aliens.

Either way, and as much as I dislike Podesta, he does have a proven track record of trying to get the government to disclose information on extraterrestrial life.

Even if Clinton won it is not as simple as the President saying release this information. We dont know what info the intelligence agencies / DoD, etc etc have. Without knowing that we cant be sure they would release anything worthy of the endeavor.

Hell President Kennedy issued order to the CIA to cease any and all activities related to assassinating Castro. Not only did they ignore that direct order, imo it was one of the reasons the CIA was involved in his assassination.

Aliens eh. So not enough aliens outside of our solar system voted for her?
ree-ree..that's funny

posted on Apr, 30 2018 @ 05:05 PM
link
He can't stand that he's never been anally probed, and now that window has closed he probably never will be so he blames her for never getting the privilege to be probed...

Our leaders and political people are ree-ree.

Maybe she birthed an alien here?