Leaks, feasts and sex parties: How the US Navy’s floating headquarters was infiltrated!

As the flagship for the Navy’s 7th Fleet, the USS Blue Ridge plays a critical role in national security by overseeing all U.S. maritime operations in Asia and the western Pacific. The venerable warship is the Navy’s second-oldest active-duty vessel and has survived the Vietnam War, the Cold War and tensions with China and North Korea.

But there is one foreign threat against which the Blue Ridge proved utterly defenseless for many years: a 6-foot-3, 350-pound tugboat owner known as “Fat Leonard.”

In a case that ranks as the worst corruption scandal in Navy history, the Justice Department has charged 15 officers and one enlisted sailor who served on the Blue Ridge with taking bribes from or lying about their ties to Leonard Glenn Francis, a Singapore-based tycoon who held lucrative contracts to service Navy ships and submarines in Asian ports.

Prosecutors say nine sailors from the 7th Fleet flagship leaked classified information about ship movements and other secrets to Francis, a Malaysian citizen, making the Blue Ridge perhaps the most widely compromised U.S. military headquarters of the modern era.

Between 2006 and 2013, Francis doled out illicit gifts, hosted epicurean feasts and sponsored sex parties for Blue Ridge personnel on at least 45 occasions, according to federal court records and Navy documents obtained by The Washington Post under the Freedom of Information Act.

 
The USS Blue Ridge, flagship of the 7th Fleet, is pictured during a
port visit in Jakarta, Indonesia, in April 2010. ( U.S. Navy)

 
Capt. David Newland, the 7th Fleet chief of staff, left, with Francis, right,
and an unidentified hotel sommelier, holding a bottle of Cristal Champagne,
appear on the roof of the 73-story Swissôtel the Stamford in Singapore on
March 9, 2006 (Obtained by The Washington Post)


Is the 7th Fleet operational and ready for battle seeing that it is reeling after a series of deadly ship collisions and one of the worst corruption scandal in Navy history? Wither professionalism? Can it ensure security of its national interests and the people of America?

More in the link below.

posted on Feb, 2 2018 @ 12:57 AM
link
I`m not shocked or surprised, what do you expect from a military that will accept anybody or anything?

America likes to say that they have a "professional" military because they don`t draft people, but they do accept every freak of humanity into their ranks.

a freak show doesn`t constitute a top of the line military but it does make for a very good cicrus show. The barnum and baily circus recently went of business,maybe the U.S DOD could earn some extra money by having their troops put on a freak show to replace barnum and baily?

This is eye opening in showing how easy it is to get hold of classified material. All you need is champagne and hookers and the military just give it to you. Nice and easy!

originally posted by: pheonix358
Many on ATS get upset with China and others for 'Theft of Military Secrets.'

This is eye opening in showing how easy it is to get hold of classified material. All you need is champagne and hookers and the military just give it to you. Nice and easy!

exactly right, the big wig military folk in Washington are sitting there thinking how awesome their military is, and the Chinese are thinking, omg the American military is so easy to steal secrets from. well as long as the ivory tower military folks in Washington are happy that`s all that matters, I guess.They`ll get their promotions, raises and bonuses by jerking each other off, as for the rest of us (we the people) we`re screwed.
edit on 2-2-2018 by bluechevytree because: (no reason given)
edit on 2-2-2018 by bluechevytree because: (no reason given)

The collision of guided-missile destroyer USS John S. McCain with a tanker near Singapore was the fourth accident involving ships from the US Navy's 7th fleet in less than a year!! Wow! Yep, ready for combat - with merchant ships!! Lol!

And there's more from the much vaunted 7th Fleet....


The Arleigh Burke-class guided-missile destroyer USS Fitzgerald that collided with a container ship in the busy sea off Japan..... 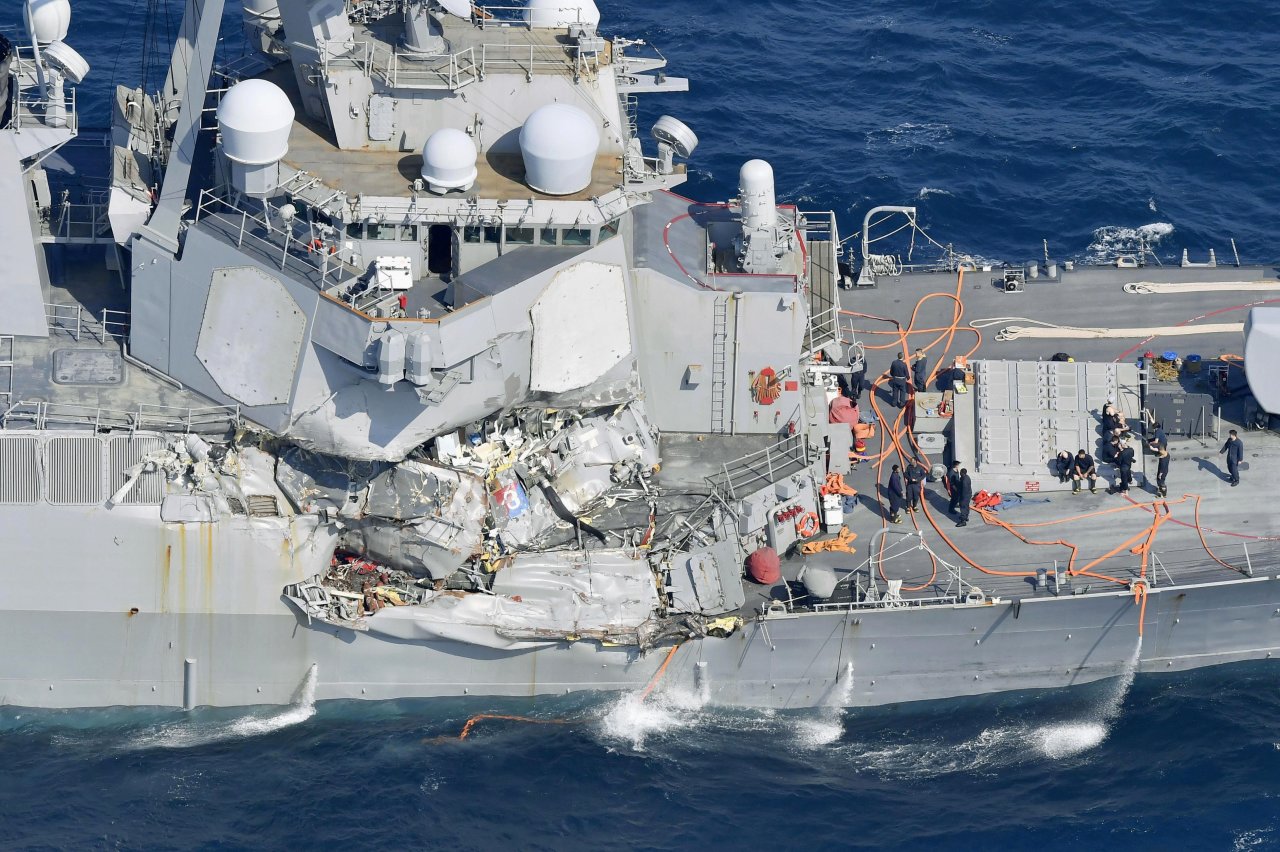 Add to it the Ticonderoga-class guided-missile cruiser USS Lake Champlain which collided with a South Korean fishing vessel off the country’s eastern coast last May, a month before the incident involving the Fitzgerald.

And there's more but this speaks volumes for the lack of professionalism in the US Navy especially the 7th Fleet. No wonder the USN shudders at the thought of confronting China in the South China Sea. They've backed away whenever the PLAAN flexed its muscles!

posted on Feb, 2 2018 @ 01:40 PM
link
Can anyone find any part of the government maybe or even the, not government-run enterprises that are not corrupt in the extreme now and nearly openly corrupt?


Last days! The wheat and weeds have grown up together. The fig tree is ripe.

posted on Feb, 2 2018 @ 08:57 PM
link
I think in light of recent events, we will see a resurgence in personal accountability and Libertarianism. I think the military will rectify its own issues internally, when all this PC baloney has been gutted from its poor, dying carcass.

Well, there has to some benefit for joining the milittree dosen't there?

I'd love to go a sex party at which there were lots of girls.
edit on 3-2-2018 by Azureblue because: (no reason given)