posted on Feb, 18 2014 @ 06:32 PM
link
All I can say I really feel for this vet!
Three of my retired vet. friends that were lifers had their pensions cut. One of my Marine buddies still can't get the %20 disability he deserves for wound received. My friend Gunny as we call him 25 plus years in the marines..3 purple hearts, Silver Star, bronze Star. Complete Bull Crap!

posted on Feb, 18 2014 @ 06:57 PM
link
I happen to know SrA Kolfage; Brian is one of the nicest and most courageous young men that I have ever had the pleasure of knowing or serving with. Even after losing three limbs, Brian continued to serve the USAF as a civilian employee; trust me, this young man knows what dedication and service to one's country actually means. Kudos Brian, well said my friend
edit on 18-2-2014 by madmac5150 because: My cat made me

posted on Feb, 18 2014 @ 07:04 PM
link
Good letter but I felt the last part was cut short. Not sure it was posted in its entirety his pension being cut was not mentioned.

Really bad to sacrifice your limbs for no compensation with pensions. A vet needs that for themselves and their families.

I don't support wars and troops, because I feel they are brainwashed into why they are fighting, like he mentioned. Two wrongs never make a right.

posted on Feb, 18 2014 @ 08:30 PM
link
If you don't want your limbs blown off, don't join the military. The guy says he joined up to get an education? Take out some student loans and go to college. Why risk getting killed to get a degree? Unless of course he never counted on seeing any action. Also, I don't feel particularly sorry for him that he had to go to the regular highschool in the "rough area" of Hawaii. Then he complains that Obama is rich and doesn't serve the public? Where's this guy been? I'm no Obama fan, but ALL politicians are the same. None of them have the little guy's interests in mind. Its an elite club for serving the elite. Its a shame he didn't figure that out much earlier.

posted on Feb, 18 2014 @ 09:52 PM
link
He really doesn't know anything about Obama does he? Obama was poor and went to the private school on a scholarship. Shame on Obama for using his brain.

And the war started when Bush was in the Whitehouse but seeing how this is a Democrat hit piece he seems to try to leave Bush out of his little speech. Where is his letter to Bush complaining about how nothing was accomplished when he was in office? Then he whines about Obama ending the war apparently he wanted even more soldiers to die and lose limbs in a war that never should have happened. Destroying Iraq was the idea because it's kind of hard to nation build if nothing is destroyed.

The part about benefits being cut isn't in the article but I'm sure he wrote scathing letters to the people whose idea it was to cut benefits and that was Paul Ryan and Patty Murray.

posted on Feb, 18 2014 @ 10:57 PM
link
I'm not a supporter of Obama, but facts are facts. Although it's sad this young man lost limbs in a war that should have never taken place, nobody put a gun to his head and forced him to sign-up for a war that was wrong in the first place and based on lies.
Obama never even voted on the war in Iraq and stated he was against it.

Obama was not in the Senate at the time of the vote but opposed the war from the start. He has proposed a phased withdrawal of U.S. troops from Iraq to be completed by the end of March 2008, and he told reporters he was uncertain how Clinton intended to end the conflict.

Iraq was never a threat to the United States. No ounce of blood should be shed to fight wars or conflicts that are not a direct threat to the U.S. homeland. The conflicts and occupations in the middle east have always been about the control of oil. If you don't think so, just check out the increase in Haliburton's stock since the invasion.

I do blame Obama for not withdrawing troops out of Iraq immediately after taking office. But we know how all his other promises fell by the wayside. He's a president with no backbone.

Too many young men and women are caught up with the glory of being in the military that are pushed upon high school students by recruiters. Their minds are impressionable and some connect the enjoyment of playing war video games as a prelude to real combat. When they see their buddies cut down and the real hell of war, reality sets in and they realize too late that joining the military wasn't what they thought it would be.

Government officials use these impressionable minds to do their dirty work. They can ruin and end young lives at the click of a voting switch.

posted on Feb, 19 2014 @ 02:23 AM
link
I fought very hard to restrain myself from even dignifying those remarks with a response.

All I can say, is that, the shameful act of blaming a veteran for his wounds makes me wonder if this world hasn't finally lost its damned mind...

Some ignorance just can't be denied...


I agree, the idiots on here dont have the SLIGHTEST CLUE... 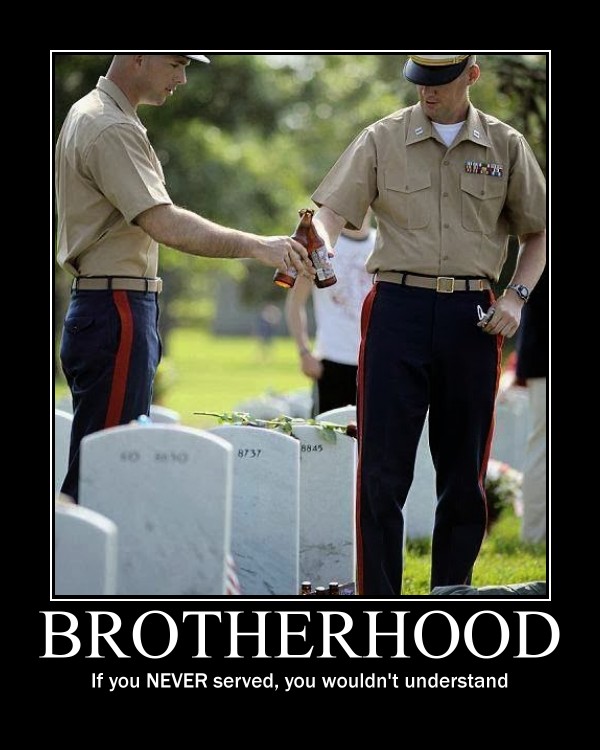 
God Bless you and Brian! Thank You for serving.

madmac5150
I fought very hard to restrain myself from even dignifying those remarks with a response.

All I can say, is that, the shameful act of blaming a veteran for his wounds makes me wonder if this world hasn't finally lost its damned mind...

Some ignorance just can't be denied...


Did someone place a gun against his head and force him to sign up? He requested to go to Iraq so he placed himself in harms way. And him using his injuries to cry about politics is just as shameful.


I agree, the idiots on here dont have the SLIGHTEST CLUE...

I am a combat veteran are you? And it's disrespectful to chug beer at the graveside of one who fell in battle. If you want to drink to the memory of a friend do it in a bar.

posted on Feb, 20 2014 @ 02:01 PM
link
Yes they Volunteer to Join the service. Me no I was not in the service but many of my friends did going back to Vietnam.
As for me... people ask me what's your hobby?
I am a Vol. Firefighter , 40 years was also on the only bomb squad in Connecticut other than the states in the seventies.
I have saved lives and lost them and have been injured many times.
Why? I like saving lives!