posted on Feb, 16 2014 @ 02:36 PM
link
Good day. Can someone please provide a link to the oficial papers where in 2006 (ish) the UK Ministry of Defense admitted that UFOs (UAPs as the Brits call them) actually exist as plasma type orbs. I need to show it to some people (to stop the laughter aimed at me) at work as they don't believe that the UK military has already admitted to the existence of these UFOs

Also what is a UFO? Do people see things in the sir that they cant explain from time to time? Of course they do, anything that's to far away to see what it is is a UFO. But that doesn't automatically make them visiting alien space ships.

Some people like to say that because the military collect reports of UFO's they must think we are being visited by aliens. When in reality its just their job to follow up on anything they cant identify in our airspace in case its some exotic military tech from another country.

This isn't particularly directed at the op, just thoughts of my own


I did a quick google for you, but it seems the document you are after has been archived (if it's the one you're after). Try this link, and choose the top option and it will bring up a PDF. I haven't read it, but hopefully it's what you're after.

Or this one, again, choose top option.


Altogether not a very exciting report 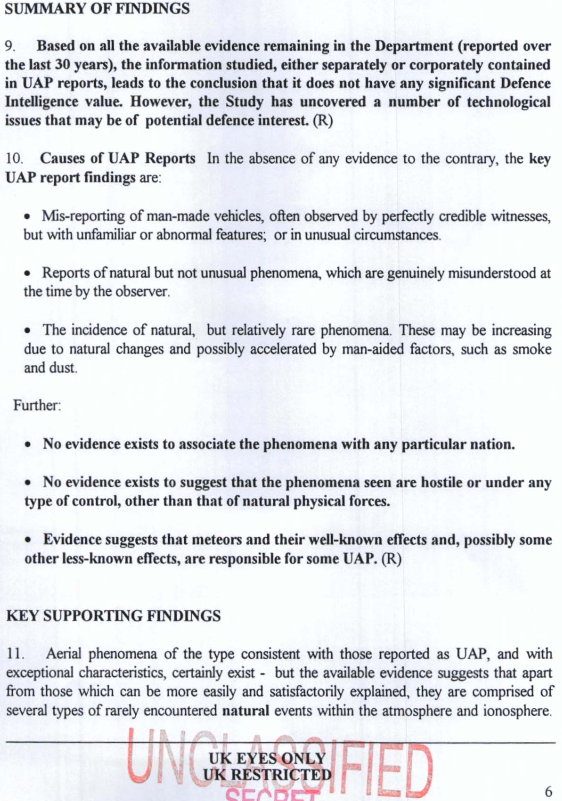 
That Unidentified Arial Phenomenon (UAP or UFO) Exist is indisputable. Credited with the ability to hover, land, take off, accelerate to astonishing velocities and vanish. They can reportedly alter their direction of flight suddenly and clearly can exhibit acrodynamic characteristics well beyond those of any known aircraft or missle - either manned or unmanned.

The Conditions for the initial formation and sustaining what apparently bouyant charged masses, which can form, seperate, merge, hover climp, dive, and accelerate are not completly understood.


Which part of the reports is that section from? There are 3 to choose from.


That's it! Thanks fellow Staffordian. That'll shut em up at work lol!

The information is pages 8 or 9 of the pdf (although) 6 or 7 on the actual page itself.


Is it possible you're referring to the Ministry of Defence Project Condign report which states ...


It concluded: "There is no evidence that any UAP, seen in the UKADR [UK Air Defence Region], are incursions by air-objects of any intelligent (extraterrestrial or foreign) origin, or that they represent any hostile intent." A little-discussed conclusion of the report was that novel meteorological plasma phenomenon akin to ball lightning are responsible for "the majority, if not all" of otherwise inexplicable sightings, especially reports of black triangle UFOs.
en.wikipedia.org...

Nice one bud. Need this as I'm met with derision in the work place

That Unidentified Arial Phenomenon (UAP or UFO) Exist is indisputable. Credited with the ability to hover, land, take off, accelerate to astonishing velocities and vanish. They can reportedly alter their direction of flight suddenly and clearly can exhibit acrodynamic characteristics well beyond those of any known aircraft or missle - either manned or unmanned.

Is NOT admitting that there are things that alter their direction of flight suddenly and clearly can exhibit aerodynamic characteristics well beyond those of any known aircraft or missile. Its just saying that people are reporting strange things for whatever reason and that's why they are doing an investigation.

The results of the investigation are in the summary i posted above. In that they say that there is no evidence they have found that indicated that the reports are anything other than man made aircraft or natural phenomenon like ball lightening. So if you want to show your friends at work that the military cant find anything out of the ordinary going on then that's the report to show them.


Sorry. Had to run. As soon as I hit reply before heard my little one shout. She threw up in bed. Hope it helps. Now going to clean up.


No not that one, it's the one from 2006 Carl and Ms. beck linked to, the BBC had it up as the main headline on a Monday morning, then never made the news by mid day. The MOD admit that the plasma orbs exist

Well it's good enough for me. The MOD admit that these things exist. They've had them tailing their planes since WW2


It's the same report, commonly referred to as the Condign Report.

I wrote a fairly long item about the flaws in that report shortly before it was made available by the Ministry of Defence on its website, which I later reposted on ATS at the link below:
www.abovetopsecret.com...


Well the result is that they think there are weather effects that get mis-reported and they are not intelligently controlled. But then we have known about ball lightening for ages.

As for the few reports in the 2nd world war, im not sure i find the stories of a few pilots hopped up on massive doses of pharmaceutical grade amphetamines suffering from post traumatic stress and sleep deprivation as being all that credible.

It's the same report? Ok, thanks for the direction there. It actually states that these things exist, I need this confirmation on paper as I'm getting ribbed about my beliefs at work

The report states that the fact that UFOs exist is undisputable. It also states they can exhibit amazing flight characteristics, this is admission to their existence. The MOD should know, with all their pilots up there, many reporting these orbs going back to the forties. Even if the pilots were a little high, maybe you just cracked something - are they able to see things in other light frequencies when stoned?


The report states that the fact that UFOs exist is undisputable. It also states they can exhibit amazing flight characteristics, this is admission to their existence.

Clearly the report states that there are rare and as yet unclassified weather phenomena that get mistaken for something more extraordinary.

Dont get me wrong, im all for finding ET. But if you don't want to be ridiculed at work about the subject i suggest you don't point them to this report because its clear you are only reading what you want to hear and missing what it actually says.