Is Argentina, the Social Spending Poster Child, Harbinger of What's to Come?

posted on Feb, 2 2014 @ 12:11 PM
link
Earlier in 2013, the government in Argentina froze prices of 500 supermarket products due to inflation. (source) It seems that Argentina's woes have come to a head as the peso has reached its all-time low recently since their financial crises nearly ten years ago. Economists are saying it is due to the social spending tactics that were used to prop up the economy. Sound familiar?

Generous social spending after the economic collapse, like freezing household electricity rates, has widened Argentina’s budget deficit, encouraged energy consumption and increased the country’s dependence on energy imports, eroding the central bank’s hard currency reserves. Inflation is so high that it has become a heated political issue, with economists saying it exceeded 28 percent in 2013 and officials insisting it was 10.9 percent.

With all the hype about global meltdown, I was surprised not to see Argentina added to the list of casualties on ATS. It is a perfect example of what is happening in the US after the Fed's QE and Federal unemployment benefits. Ironically Bernake is being hailed as a hero by the controlling interests of the Federal Reserve because he has literally increased its net worth by nearly 350% since he began his tenure. (source) 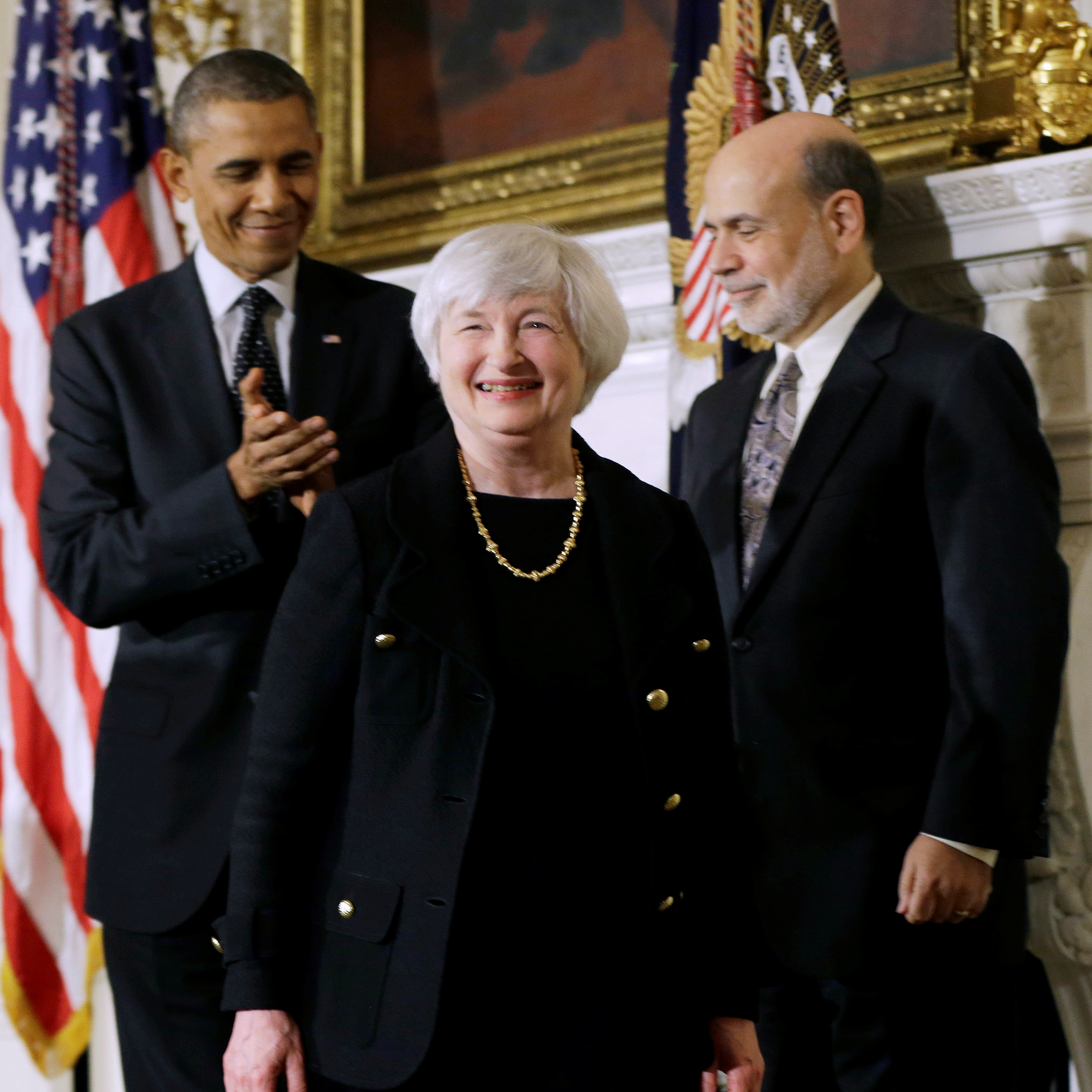 So what's the real reason why the US is actively pursuing more domestic oil? The inflationary value of the dollar makes foreign oil too expensive for both the average consumer and freight companies. It isn't the deflation of the US dollar that is teetering this world trade currency though.

The US is losing ground because it is not purchasing as much foreign oil which makes up the majority of its political influence with foreign partners. What use is the US to the Middle East, China or Russia if it's not buying oil? If it is not buying as much oil, there is less of a dollar value for purchasing other foreign commodities. Get the picture?

There is only one way this ship is sinking and Argentina is a harbinger for what's to come. Most banks aren't going to risk a deflationary tactic like the one used in Cyprus last year. That tactic failed miserably.

I think most people will be very surprised where the next round of money is coming from to shore up the world economy. It is imperative that international trade is boosted or more headlines like the ones out of Argentina will be gracing ATS in the coming months. It is no wonder Matt Drudge is sounding the whistle.

CodeRed3D
What use is the US to the Middle East, China or Russia if it's not buying oil? If it is not buying as much oil, there is less of a dollar value for purchasing other foreign commodities. Get the picture?

The picture you paint is very simplistic. There is more to the world than oil. Besides, the US still importing crude in 2012 at late 1990 levels, with Canada the main supplier and higher than the entire Persian Gulf. It imported very little from Russia.

On Argentina - the country is a basket case economy. Poorly run and in poor state.

posted on Feb, 2 2014 @ 02:18 PM
link
Hopefully it will not get as bad as it has been in the past when everything turned to caca.. One of the guys who survived the situation and actually wrote a book about his experiences. The blog is worth a read IMO

1) Those that want to harm you/steal from you don’t come with a pirate flag waving over their heads.

2) Neither do they start shooting at you 200 yards away.

3) They won’t come riding loud bikes or dressed with their orange, convict just escaped from prison jump suits, so that you can identify them the better. Nor do they all wear chains around their necks and leather jackets. If I had a dollar for each time a person that got robbed told me “They looked like NORMAL people, dressed better than we are”, honestly, I would have enough money for a nice gun. There are exceptions, but don’t expect them to dress like in the movies.

4) A man with a wife and two or three kids can’t set up a watch. I don’t care if you are SEAL, SWAT or John Freaking Rambo, no 6th sense is going to tell you that there is a guy pointing a gun at your back when you are trying to fix the water pump that just broke, or carrying a big heavy bag of dried beans you bought that morning.


I was talking to my coworker who is from Argentina, and came to the US 20 years ago. He told me the problem with Argentina is simple everyone is now conditioned to expect handouts and nobody wants to work. He said he left because there was no hope to prosper there, and that his grandfather was wiped out 3 times during his life due to inflation.

He also told me that a bunch of bums got together and blocked the streets demanding a paid vacation recently, and the government gave in and gave everybody 2 weeks paid vacation employed or not. He unfortunately thinks history is doomed to repeat itself over and over there because the majority of people now believe government handouts are a right. What really scares him and me is he sees the same trends happening here, and his conclusion was people get the government they deserve.

paraphi
The picture you paint is very simplistic. There is more to the world than oil. Besides, the US still importing crude in 2012 at late 1990 levels, with Canada the main supplier and higher than the entire Persian Gulf. It imported very little from Russia.

During the rough road the US economy took in 2008 peak oil was very much a topic on everyone's mind. In the US you could almost match the rise in inflation to the drop in consumption of foreign oil. I suppose one can always argue which came first, but those two technical analysis are very much married to one another due to the US dollar being the reserve currency.

Both Russia and China have controlling interests in the Middle East - the silk road is still very much alive. They both make a bang on the oil sold there. The US being less of an economic player in that court today has stimulated the desire to leave the US dollar. (Let's not even mention the drug trade; the dirty little secret that holds everything together!)

I do agree, my picture is a bit too simplistic as oil doesn't make up a large percentage of the GDP in most countries. But oil is the gold standard the economy has been measured in since the start of the industrial revolution.

Those days are past and now all the technical data is skewed with insider trading -- more and more dropping the petrodollar. The fallout trickles down to countries like Argentina who rely heavily on exports.

Argentina isn't a "basket case". You'd be hard pressed to point to any European country that isn't burdened down by the cost of social reforms. There are many more countries to follow because the world is still using petrocurrency to make economic decisions, and not everyone is on the same page.


I'd say that Detroit and California are much better models of where America is heading.

Detroit represents nothing less than progressivism in its final stage of decadence: Worried that unionized public-sector workers are looting your city? Detroit is already bankrupt, unable to provide basic services expected of it — half the streetlights don’t work, transit has been reduced, neighborhoods go unpatrolled. Worried that public-sector unions are ruining your schools? Detroit’s were ruined a generation or more ago, the results of which are everywhere to be seen in the city. Worried that Obamacare is going to ruin our health-care markets? General-practice physicians are hard to find in Detroit, and those willing to accept Medicaid — which covers a great swath of Detroit’s population — are rarer still. Worried about the permissive culture? Four out of five of Detroit’s children are born out of wedlock. Worried that government is making it difficult for businesses to thrive? Many people in Detroit have to travel miles to find a grocery store. This is the endgame of welfare economics: What good is Medicaid if there are no doctors? What good are food stamps where there is no food? What good are “free” schools if you’re so afraid to send your children there that you feel it prudent to arm them first?

The decay of Detroit is not the inevitable outcome of the decline of the automotive industry: The automotive industry is thriving in the United States — but not in Detroit. It isn’t white flight: The black middle class has left Detroit as fast as it can. The model of Detroit politics is startlingly familiar in its fundamentals, distinguished only by its degree of advancement: Advance the interests of public-sector unions and politically connected business cronies, expand the relative size of the public sector remorselessly ...

Melissa Harris-Perry, “America’s leading public intellectual,” blames Detroit’s problems on its conservatism and small government, oblivious to the fact that Detroit maintains twice as many city employees per resident as do larger cities such as Fort Worth and Indianapolis, and three times as many as liberal San Jose.

posted on Feb, 2 2014 @ 07:08 PM
link
I am just so tired of seeing people caring more about the economy than how we are spiraling down the same road again. A cycle that has been happening for more than 2,000 years. The economy will collapse and it will raise again, those are factors we can control. What we don't seem to have control on is on our greed, that is what will cause us to cease to exist. So, you are so worried about the economy, well there isn't much you can do about it as only 6 people control that. How about spend that time pursuing your happiness, I bet you will have a fulfilling life that way. Those who are controlling the world today, their party is about to end. Do not feed them with worrying about this nonsense. America is a continent, my darling. Your America, the one you think it's your country, that one only stayed on our founding father's dreams.
edit on 2-2-2014 by falucho05 because: (no reason given)