IT'S a few notches on a 4000-year-old clay tablet. But what it reveals about the ancient biblical story of Noah's ark has scholars crowing the world over.
The British Museum yesterday put the recently deciphered clay tablet from ancient Mesopotamia - now Iraq - on display.
It's claimed to be one of the most important archaeological discoveries ever.
What it contains are specifications for the legendary Ark which was said to have saved two of each animal - and a handful of humans - from a catastrophic flood.
But some of the details are different to the generally known version.
It describes a circular vessel known as a coracle, not the rectangular vessel of modern mythology.
"It was really a heart-stopping moment - the discovery that the boat was to be a round boat," the tablet's discoverer, Irving Finkel said. "That was a real surprise." 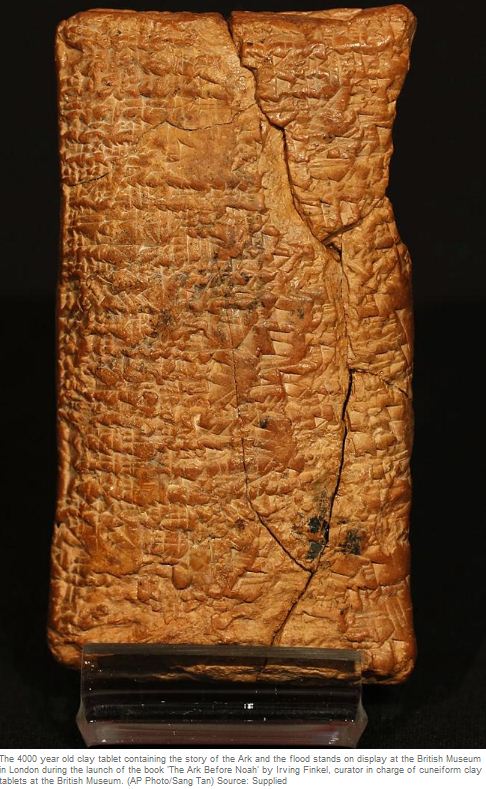 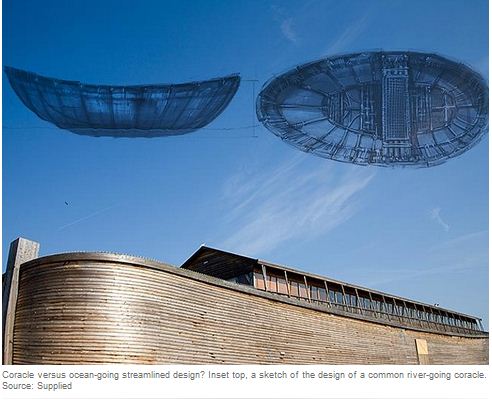 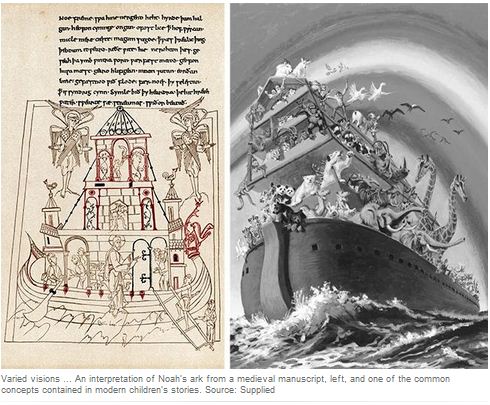 I love this stuff, I always thought the idea of obtaining all the animals 2 by 2 was a load of crap, but I guess a man would save his livestock wouldn't he.........I just don't think he could collect "all" the animals in the world......Ahem?

Notice how his "ship" / Ark grows in every publication you ever saw?

posted on Jan, 30 2014 @ 12:15 AM
link
the tablet looks like an old cracker!
that being said, very interesting find.
I kinda dig the ark having a round shape, and now, let's hear the people suggesting it was a project to create a flying saucer and send the animals up to space
jokes aside, i hope we find out more about this.

Notice how his "ship" / Ark grows in every publication you ever saw?


yup - and I have a suspicion that the factual orignis of the flood / ark myth started with a ferrymaster who saved his family and his horse , cow , sheep , goat , pig , chicken , dog and cat - that's it

and from small but true beginigs , millennia of Chinese whispers take hold


Hole in one my friend.


Thanks man for this, I imagine when they said 2 of every animal it was just the animals they knew of in that area?

Though this was posted a couple weeks back


I have one problem with this, the Bible and it's date of inception are still in dispute, the earliest works of genesis may actually be a compendium of earlier text's and there is no evidence that the sumerian's wrote this text prior to what may or may not have been either a verbal or even writen account of other semitic people such as the proto iraelite's, there is a conception that the sumerian culture with the given evidence of the fertile crescent region was the earliest civilisation and yet there are ruins of earler sites within a geographic stones throw such as gobekli tepi in turkey or even more interesting the two sunken ruins that are accepted in asia as ancient citys over 12000 years old (Interesting there acceptance is more likely in asia than were it can rock the bursery paying, plush seat warmed by men whom have built there reputation on earlier work that they have a very strong vested interest in keeping as a basis as there whole house of card's is built on it).
Now what if the text the sumerian's wrote was there own and not earlier version.
A lack of evidence is not evidence against and though it has become accepted archaeological cannon the sumerian culture may indeed not have been anywhere near the first culture, indeed the diorite vases and water jugs of egypt show a very high level of sophistication as does the so called Osireion alternativearchaeology.jigsy.com...
Which may predate the other sites known to them, one of the most intriguing anomolys of ancient egypt is how a fully formed civilization suddenly appeared "fully formed" 5000 years ago unless of course it was a lot older or based upon an earlier culture.
I love the ancient fertile crescent theorys but it is time to lay them to rest and for instance the western centric view that agriculture started there ingnores much evidence from elsewhere such as a possible rice paddy site over 10000 years old in japan or this in china,
http-server.carleton.ca...
now bear in mind people travel so I can not see it taking 4000 years to spead as an idea or method, especially if it was a certain source of sustainance for a people.
These just show how entrenched the OPINION that farming began in the fertile crescent is, much of modern archaeological belief still is based on earlier and far less scientific discovery's made by early archeaologist's and today they are a more rigorous profession with higher standards, still as a discipline it still does have that earlier baggage though and indeed much of what is taken as fact is in fact false, erroneous and simple wrong based on earlier less scientific speculation and opinion.

IShotMyLastMuse
the tablet looks like an old cracker!
that being said, very interesting find.
I kinda dig the ark having a round shape, and now, let's hear the people suggesting it was a project to create a flying saucer and send the animals up to space
jokes aside, i hope we find out more about this.

Not even the largest modern ship in the world could hold two of each animal and food to feed them....
So how does a wooden vessel manage to do such???
Logic points to the ark as being way beyond our current technology.