The Mystery Religion – Jesus (The Sun of God)

Hello ATS! To begin, this is my first thread and hopefully, it will be one of many.

Was Christianity created in order to preserve the mystery religion?

Christianity and astrology are seen as incompatible by modern orthodox Christian doctrine and the question is why?

Is it because when we strip down Christianity, we find evidence of the mystery religion?

On earth, we have something known as the great age or astrological age. This great age has been recorded throughout history by many cultures and ancient societies. A great age is a period through which the earth makes a full precession on its tilt. A full precession takes roughly 25,920 years.

Every day, the background of which the sun sets changes, until 25,920 years later it returns to its original point only to start a new precession. This great age was divided into 12 segments which equalled roughly 2160 years and is identified by particular constellations known as ’ages’, ‘houses of the sun’ or Zodiacs.

The Sun of God

Jesus is a representation of the Sun in the age/house of Pisces (2160 years).

Jesus had 12 disciples. The sun travels through 12 constellations.

The solstices, together with the equinoxes, are connected with the seasons and create a cross, thus god’s sun died on the cross.

"And he was transfigured before them, and his face shone like the sun, and his garments became white as light." - Matthew 17:2

"I have come into the world as a light, so that no one who believes in me should stay in darkness." - John 12:46

"The true light that enlightens every man was coming into the world." - John 1:9

“I am the light of the world that every eye will see." - Revelations 1:7

“Behold, when ye are entered into the city, there shall a man meet you bearing a pitcher of water... follow him into the house where he entereth in.” - Luke 22:10

“And there are seven kings: five are fallen, and one is, and the other is not yet come; and when he comes, he must continue a short space.” – Revelations 17:10

In the image below we can see the houses of the zodiac. Leo being the first house is a king and is followed by six other kings, cancer, Gemini, Taurus, Aries, Pisces and Aquarius.

One is – Pisces, The age we are currently in.

The other is not yet come; and when he comes, he must continue a short space. This is Aquarius. His short space represents his 2160 years in reign. 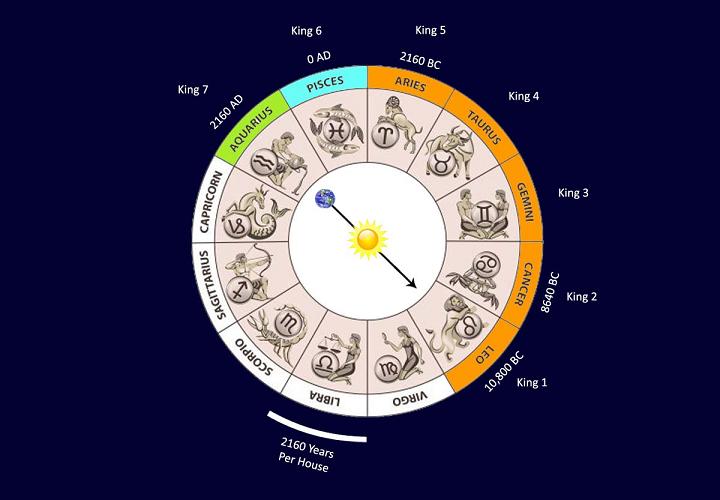 As we move from one age to another, we first go through a transitional period where the end of an age is brought about and we are ushered into the new age.

This transitional period lasts for 1.5 degrees on either side of each house totaling 33 degrees per house. The same number of degrees in the Scottish rite of freemasonry.

If calendars are correct and the age of Pisces started at 0bc, then we will enter the house of Aquarius in the year 2160.

Coincidentally, there is a page on the “club of Rome” website where the date 2052 seems quite important. 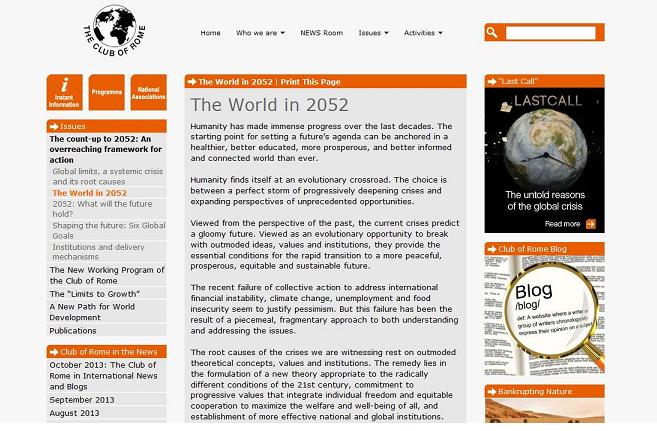 The count-up to 2052: An overreaching framework for action

Humanity has made immense progress over the last decades. The starting point for setting a future’s agenda can be anchored in a healthier, better educated, more prosperous, and better informed and connected world than ever.

Humanity finds itself at an evolutionary crossroad. The choice is between a perfect storm of progressively deepening crises and expanding perspectives of unprecedented opportunities.

Viewed from the perspective of the past, the current crises predict a gloomy future. Viewed as an evolutionary opportunity to break with outmoded ideas, values and institutions, they provide the essential conditions for the rapid transition to a more peaceful, prosperous, equitable and sustainable future.

The world in 2052 can be a much safer and resilient place than it is today. Humanity has the opportunities, the tools, the science, technology and the insight to overcome the systemic crisis and to move into a better world. Whether we manage to do so will depend on each one of us.

Giza and the First house

The pyramids represent a date around 10,500BC when the constellation of Leo rose behind the sun. Were the pyramids built to represent the first house of the astrological age? I for one am convinced that the pyramids were build around this date due to 3 main reasons.

The first being that around 10,500BC, the constellation of Orion lined up near perfectly with the Giza Pyramids.

Secondly, the sphinx is facing the east where the sun rises and at around 10,500BC, the constellation of Leo rose behind the sun.

Thirdly, water erosion around the base of the sphinx indicates that the sphinx had to have been build prior to 8,500BC when are region experienced a tropical climate. 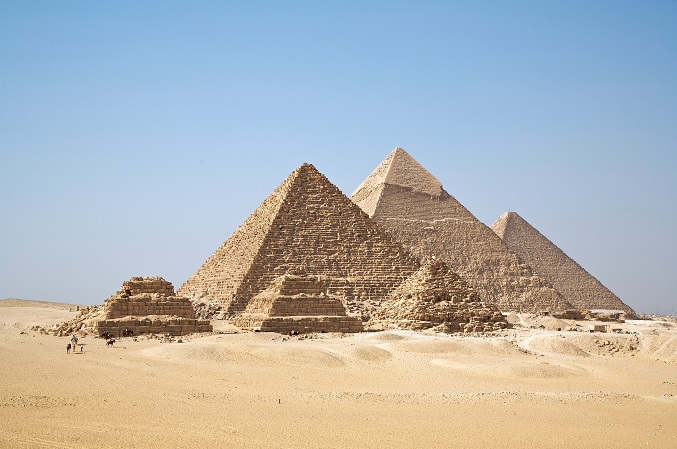 ...It is hidden in plain sight.


Check out the work of Robert Sarmast. He created a documentary titled "Secrets of Jesus Christ".

Basically he said that Jesus purposely used the existing myth's to make his message easier to receive in various parts of the world. He makes a pretty compelling case.

I think some of the first sun deities were a goddesses and then later the goddesses gradually were downgraded to the moon and the sun deities became male while their wives were the moon.

I think as far Christianity and especially Jesus is concerned the god Krishna is probably where most of the story came from. Even that though was based on even older deities.

But yeah, sun and constellation worship is very common throughout history and obviously Christianity is based on that.

And Bethlehem is house of bread which is also associated with Virgo.

Also, Pisces the fish...Jesus and the fish.

There's a lot of similarities for sure.

Another important point you forgot to mention is the tradition that Jesus died at the age of 33, that aligns with each age sharing 33 degrees of the cycle. After 33 degrees is up, the current age dies and a new one starts.

I for one think it is obvious that pagans had an influence on the story of Jesus, the pagan symbolism is all over the gospels and you pointed out some very good examples. Another thing I find interesting is the first and last things Jesus says while on his ministry in Matthew's gospel.

Matthew 4
19 “Come, follow me,” Jesus said, “and I will send you out to fish for people.” 20 At once they left their nets and followed him.

Making his disciples "fish" for people is a clear reference to the Astrological symbol Pisces which is represented by a fish.

20 and teaching them to obey everything I have commanded you. And surely I am with you always, to the very end of the age.”

And of course as you pointed out, Jesus clearly states he will be with us until the end of the age. This is the very last verse in Matthew's gospel.

So the first and last things Jesus said while on his ministry were referring to astrological ages, I think that definitely points toward something in itself.

Those who don't see the clear pagan themes and influence within the story of Jesus are wilfully ignorant and blind to it if you ask me, and they were most likely brainwashed and indoctrinated into never question the "good book" and its true motives and origin. It's anything but the good book, I'd say it has perpetuated the most evil thing in history: forced ignorance
edit on 1/29/2014 by 3NL1GHT3N3D1 because: (no reason given)

posted on Jan, 29 2014 @ 04:13 PM
link
Also, I'm sure there will be Christians who come in here talking about Zeitgeist and how it's clearly a lie from the devil and that's where you got this idea from. Zeitgeist or not, the parallels are there, they will just choose to ignore them with any excuse they can muster.


Another important point you forgot to mention is the tradition that Jesus died at the age of 33, that aligns with each age sharing 33 degrees of the cycle. After 33 degrees is up, the current age dies and a new one starts.


I knew that the sun and the number 33 were connected in someway, just not how. It seems so obvious now. Thank you!..


I couldn't agree with you more.

"The LORD God commanded the man, saying, "From any tree of the garden you may eat freely; 17but from the tree of the knowledge of good and evil you shall not eat, for in the day that you eat from it you will surely die." - Genesis 2:17

God in this sense is nature/instinct. By going against our instinct and subconscious, we became aware, and through awareness, we learnt of death. God tells us that we musnt think for ourselves.

This ties in with Lucifer on which I will create another thread at some point!..


I look forward to the Lucifer thread. I have my own theory on what Lucifer is but I'll save it for another thread as it would be off-topic.


Nice job, I like looking at all side of religion... your points of view are interesting.

posted on Jan, 29 2014 @ 06:35 PM
link
Here's a mystery for you - where are all the exoteric Christians with their orthodox dogma that *proves* your exegesis is all wrong


They probably can't prove it wrong which is why they're staying away. If they ignore it they won't have to contemplate its validity.


They probably can't prove it wrong which is why they're staying away. If they ignore it they won't have to contemplate its validity.


they aren't here because they are busy praying that he burns in hell for eternity.

because they love him. 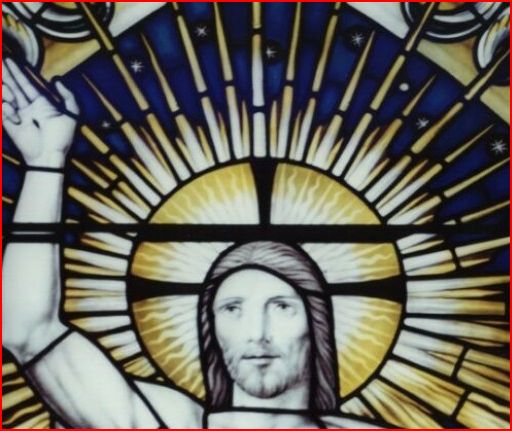 posted on Jan, 29 2014 @ 07:54 PM
link
Thought I'd drop a link to one of my threads, it has to do with some of the verses you posted and gives a slightly different spin on them. Maybe you'll be interested?

You are the Light of God


Nice thread!!! I got a lot of new info from your presentation, thanx op!
This adds nicely to what I already knew about Christianity lifting heavily from existing beliefs, such as them making December 25 the birthday of Jesus because the Celtic peoples(I think it was them) already had a celebration on that date.

posted on Jan, 30 2014 @ 09:55 AM
link
It is completely arbitrary where a heavenly body appears to be travelling through. This view is only ever relative to where we are standing, not to the heavenly body's actual position to the universe. Consequently, and since man isn't the measure of all things, the ages of aquarius and pisces are arbitrary, and nothing at all will happen when we enter that "age". It seems these people have merely created a superstition out of other superstitions.

Good presentation; we are always happy to have someone with common sense and knowledge join in this forum!

See ya 'round - and thanks for bringing this up again. I think one of my first threads was about "Easter" being a pagan festival...
anyhoo, yes, you'll run into some people who flat out deny Zeitgeist exposure. They get pretty mad sometimes, but, so do I.

Joseph who is a type of Jesus was represented as the bull in the tribal setup around the tabernacle. His younger son Ephraim was passed the birthright, and given the sign of the bull. I'm pretty sure I don't need to elucidate the connection between the bull and the sun god for you. Though God was thought to be the sun in the midst of the temple, in their zodiacal schema. But then the bull symbol probably meant the son of God, like the pharaohs were regarded as the sons of god. Also Josephus records that the mazzaroth/zodiac was carved into the floor of the second temple.

Joseph also married a daughter of the priest of On. On is aka heliopolis, or the city of the sun.