Anyone else feel like an A hole after killing a bug?

I decided to pull out the trusty old laptop to try and pass the time....I might as well be dead from boredom at this point.

I find a very much alive STINK BUG! Just creepy crawling all over my keyboard!

Okay, I admit. It wasn't necessarily crawling all over my keyboard but, the damn creepy thing was still there....okay?!

It was there! Just trying to play dead...Yeah, they can pull that trick because they are creepy little bastards.

So, as soon as I turn on the laptop and the light brightens the keyboard, guess what little turd decides to do...it starts making a bunch of creepy bug noises and a huge bug effort to escape.

My killer instincts (lol) kick in and I, of course, take action by flicking the little sucker into the wall! A rational person would stop the wrath of pain then and there but, being of ill mind and body, I took the level of destruction further by smashing the little pest with a nearby book.

Now, I'm sitting here...feeling bad for what I have done. Feeling only grateful that the book is still covering the poor dead thing.


AGREED! I can't tell you how hard I laughed just by reading the title.

posted on Jan, 25 2014 @ 01:18 AM
link
All life forms matter but sometimes our instincts override. Use when acting


You know...the things really do stink!


We have them here too, and yes they do! LOL

The mosquitos here; AKA Alaskan Air Force, are a pain in my ass. I try to kill as many as I can with no remorse whatsoever, I consider it a public service.


That's about as close as I'll get to a cold one tonight.

The avengers will come.


That's why I tend not to deliberately kill insects. If I find one, I'll capture it and set it free outside. It's not like insects are aware that they are invading my privacy lol. Although, there is a big difference between a pest infestation and a curious little bug.


The Jainists out of compassion for all life wear cloth over their mouths to avoid accidentally inhaling and thereby killing bugs.

I guess morality is relative

posted on Jan, 25 2014 @ 01:37 AM
link
Yup, I sometimes feel a bit down after killing a bug to. It usually happens when I kill a bug at work or someplace outside of the home (and there's another person there standing next to me that thinks the bug needs to die.....usually a girl, blowing out my eardrum screaming "KILL IT KILL IT! WTF WHY YOU STANDING THERE IDIOT?!? SMASH THE DAMN THING BRO!).

The only bugs I actually want to kill are cockroaches. Those things give me the creeps. I also don't like wasps or hornets/yellow jackets either, but I just run like the wind away from those. Most all other things I either pick up and take outside while at home. Or I'll let them run around in the house. Most spiders, for example, that live in the house I'll just let them keep running around, hoping they actually kill other bugs in here. (Wolf spiders are 99% of what I see in the house, and I could really care-less about them running around in here.)


Oh yes they will, and it greater numbers.

I am afraid of spiders( don't know why, i just am), and for many years i killed them when i saw one.

Now, ten years or so ago, i was sitting in my bed with a book, and a tiny house spider came walking over my arm, i immediately killed it.

One hour or so later i looked up, and there on my knee was a huge house spider staring at me with it's many eye's.

My first thought was to kill it, but then something happened to me.

I realized that the huge spider was propably the mother of the small spider i had killed earlier, and now it was just sitting there wishing that it could kill and eat me.

We where staring at each other for like five min. while judging who would make the first move.

I then decided to let the bugger live, and took it outside to live and make some more baby spiders.

That changed my view on bugs, and have never on purpose killed a bug since.
It is also why you will most of the time see a spider in my avatar, to remind me of that episode of my life, it really changed me to become a better person. 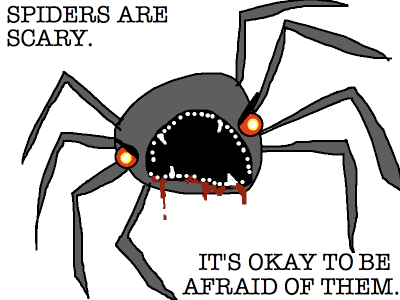 If they come inside my home, it's war I expect the same treatment from them if I poke my hand in a hornets nest.


Paper and cup every time, unless they are just house spider, then it gets a name and I get a new pet haha

Seriously though, I cringe if I step on a snail or something, just can't do it man.


They probably kill more bugs in the manufacturing of the masks than the actual masks save.


I think bugs are misunderstood, they shouldn't be killed because they're 'icky'.

I like to look after them, sometimes I'll find a rhino beetle that's stuck on his back with his little legs wriggling in the air, so I'll flip him over so he can move again.

I'm tolerant of spiders as well, to a certain degree. I can handle a dinner plate sized huntsman in the corner of the room, but not a button sized red back in my mailbox. If it can kill me, it's gotta go.

posted on Jan, 25 2014 @ 05:29 AM
link
I can't judge you. But I am very careful of what forms of life I senselessly decide to terminate. As karma is a stange and powerful force. Biting flies are fair game as they go out of their way to attack me. They know full well the consequences of their actions. Horse flies, deer flies, skeets, ticks, fleas, black flies, or no see ums. I have a soft spot for all the misunderstood creatures though. Spiders, ants, wasps, bees, earwigs, all perfectly harmless if left alone. Spiders in particular are fascinating creatures that really do have benefits for humans living in proximity. They really are gentle peaceful critters. People just can't get past their appearance, and their creepy nature. I love letting them crawl over my hands and arm. I still am nervous about them, but they have never senselessly attacked or bitten me when I handled them, meaning them no harm.
edit on 25-1-2014 by sparrowstail because: (no reason given)