Mysterious appearance in a picture and its possible meaning.

posted on Jan, 23 2014 @ 06:05 PM
link
Let me say at first that everything that will follow is merely presented with the purpose of entertainment and to bring food for thoughts.
This doesn't necessarely represents my beliefs.


***Scroll all way to bottom for the picture***

I'm no expert in paranormal but I've heard about many stories and testimonies from various people that really made me scratch my head over the possibility of it being completely true.

I've thought a lot about surnatural in my lifetime and was able to come to some powerful theories and speculations. I've decided to share one with you guys because of the circumstances of a picture I found yesterday.
It's clearly not the greatest and most plausible theory I can provide, could even be the worst, but it's still an interesting perspective.

There could be a possiblity for evil and its demons to manifest themselves through reality even if their extent is far beyond this dimension.

A possibility we could better understand through technology because it gives us the power to alter time, to make it stop.
To freeze one moment for eternity.
Something ancient people couldn't possibly do with their minds.
What I mean is if there are demons living among us it might be very hard to see or feel them with our five basic physical senses even if they had a direct influence on us. Of course, there could be people aware of their presence, like mediums, but that's another story.

Over the years, I've observed some disturbing things through pictures and videos. Thanks to the internet.
I'm not going to talk about all of them but I can say for sure that videos and pictures being taken in situation of war and evil are certainly the most mysterious. 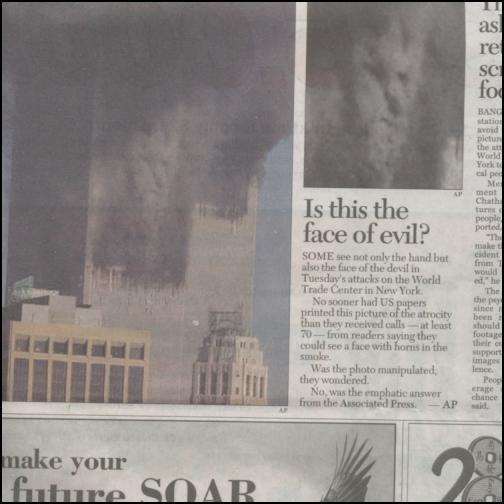 From this point on, I started to think to myself:

'If satan and demons exist, they would clearly have something to do with horrible events like 9/11. This is their trademark. This is evil.'

I then decided to stay aware of such appearances in the future, to see if they would happen frequently. I watched war videos and looked at violent explosions with curiosity. I used slow motion on some of them and what was my surprise to realize that demons' face occurrence weren't as random as I thought at first.

Now, that would make sense in a way. Explosions are an act of destruction. Destruction could be compared as an act of evil. Even volcanoes, especially supervolcanoes, cause evil-like destruction all across the universe. So if demons are real, act of war (explosions) could attract their energy.

If you download it and zoom in in the area of the black circle, you will easily see a demonish-like face in it.
The way it's just standing right over the police's shoulder, I thought that was interesting.

This is only speculations of course, but it's something I've observed many times in the past...

Other than that, I'm looking forward to hearing from you guys perspective.

This is why we see a face in rocks on mars, in crater patterns on the moon, in our cereal, etc etc etc.

Our mind alters images and processes them to see faces everywhere.

When there isn't a face, it can be added in photoshop.


I agree...If you think about demons you will see them in the clouds, fire, smoke and in your soup.
It's called Pareidolia.


Yep. I'm always seeing fairies, elves, trolls etc. in my carpeting! I suppose they could be demons, it all depends on your state of mind.


and to bring food for thoughts.


If that was your intention, you're going to end up starving all of us... 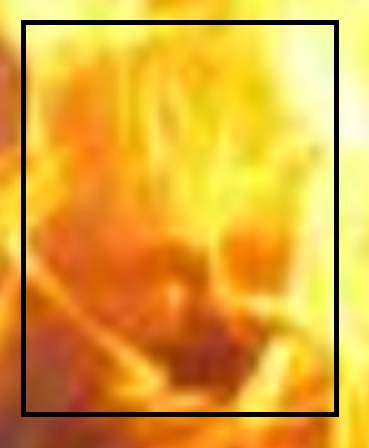 
I then decided to stay aware of such appearances in the future, to see if they would happen frequently. I watched war videos and looked at violent explosions with curiosity. I used slow motion on some of them and what was my surprise to realize that demons' face occurrence weren't as random as I thought at first.

I have a dog. Roger. A month ago I picked up a cheap lazer pointer. Red. That evening I spotted it on the floor in front of him and he went "Whoa". He jumped for the light and would not give up trying to find it even as I shined it up and down the hall, he would chase it.

So for about a week we played with this light. Then we began to notice that when the light was not on, he would wait for it. Then he began to stare at a red light switch on a power bar in the living room. When we turned that off, he began walking around the house with is nose to the rug, looking looking.

Now, though we used lazer for only about a week it has been two weeks since we quit. He now, in the house or out side in the yard, stands and watches the light from shadows as they move. A tree branch swaying in the breeze and he jumps at it. My wife, moving through the kitchen and he follows her shadow looking and looking and trying to get it.

Though we frequently used to play fetch and tug a war, Roger now just drops his toys on the floor after a few seconds and takes up his watch for the light shadows and his subsequent chasing of them.

Make of this what you will.


Not just lasers but now any moving light on the ground. He is addicted.


If you're looking for something hard enough you'll see it everywhere.


I agree...If you think about demons you will see them in the clouds, fire, smoke and in your soup.
It's called Pareidolia.

Yeah there is a name to everything nowadays.
But what does that prove?

I don't see evil-like figures in any other thing than what I stated above. This is only an observation based on subjective facts which allowed me to expand my own perspective and definition of what could be demons. No matter what people will say, Demonic creatures are a possibilty in this immensely complex universe.

There are some things that shouldn't be looked with the close-minded eyes because their compehensions cannot only rely on the use of mental labels.


What a great analogy.

My dog has the same addiction to laser pointers/light. Every time I touch something he thinks a laser is going to appear.
edit on 24-1-2014 by TorqueyThePig because: (no reason given)


f and s for the fun of these things. Take any moment of a 9/11 smoke video and you can see many faces in each one, demons aplenty as well as most anything else. I know one woman who totally freaked out at the demon faces in that smoke, and broke off a friendship with a buddy of mine because he didn't take her seriously.

About cloud faces, if you have a few moments check out the first link in my signature, a cloud face thread I've been working for quite a while now. My avatar is a cloud image from the thread (the first post says she's "dressed in blue", but it's actually the white and not the blue that makes up the image), please let me know if you can make out the image in this avatar.