A dog now named Soldier sits at the Greenville County Pet Rescue in South Carolina. Though wearing a collar, Soldier didn’t have tags. He did, however, have an old photo. The photo tucked into the dog’s collar is black and white and wrinkled. It appears to show a man in an old-fashioned jump suit, the kind mechanics or military pilots might where. Fans of the shelter’s Facebook page have taken to speculating about the contents of the photo


“It’s a really small photo, it’s black and white, of a man leaning against a gate post or a railing,” Susan Bufano, the shelter’s media relations coordinator, told GoodMorningAmerica.com. “Who knows what the story is with this.” The stray pit bull, affectionately named Soldier by the staff, has no microchip or identification tag to help the shelter locate his potential owner, if he even has one. But the aged, antique photo of what looks like a soldier casually posing for the camera was obviously tucked into the dog’s black canvas collar by someone at some point, but by whom, when or why remains to be seen. 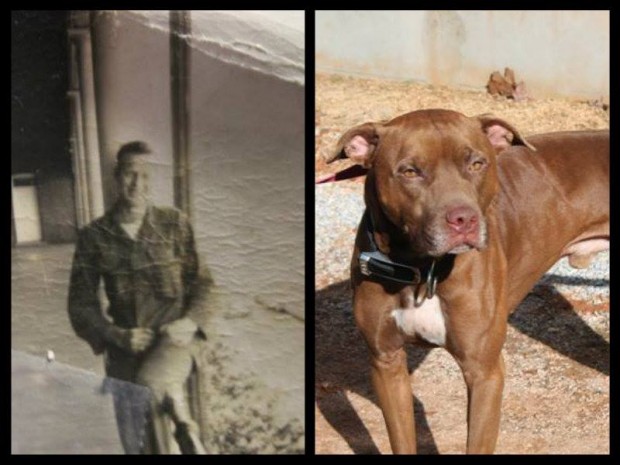 Pretty weird and cute I guess. My guess Time Traveler! What do you guys think of this mystery dog and his black and white picture of a soldier?


The pic is probably of the owner. Doubt it is a time traveler as to that is something to current day is not real, either it is faded or it is just how the pic is. Someone is looking to far into this, and knock it off. Waist your time on something out of this world.

The time traveler thing was a joke did you notice the winky face?

You need a hug bro.


I agree, hugs are needed, maybe even kisses. hahaha And how the hell would any of us know if time travel existed. It could but only in the tippy top secret side of the gov. so on you.


Spend your time trying to find the dogs owner, not make a conspiracy if a lost dog.