posted on Jan, 18 2014 @ 05:51 AM
link
Another example of mainstream history books not telling the whole story. There have been a few reasons to believe that the Portuguese were the first Europeans to visit our fair shores but nothing concrete. The article mentions a few reasons but does not make mention of the mahogany ship that was seen by a couple of early settlers half buried in sand dunes on the southern coast near Warrnambool, it was said to be a Portuguese ship. Whilst the article says "kangaroo-like" creature, having seen enough kangaroos, early European depictions of kangaroos and also the deer that stand on their hind legs to eat as mentioned, I am convinced it is a kangaroo.

The Mahogany Ship
edit on 18/1/14 by Cinrad because: (no reason given)

More on the Mahogany Ship
edit on 18/1/14 by Cinrad because: (no reason given)


Very nice find and great thread, there are quite a few Australians on ATS whom will find this interesting.

Here's an anthropomorphic fox illustrated in the "Reynard" (13th century): 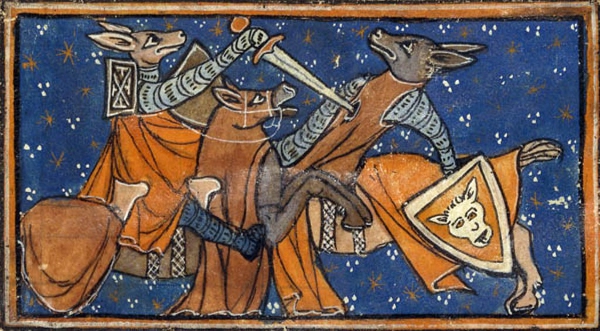 And here's a much more detailed one from the 15th century (look at the shape of the legs): 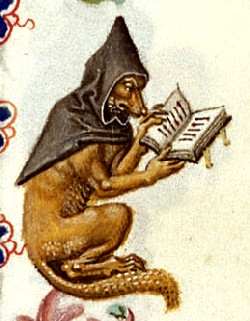 posted on Jan, 18 2014 @ 07:24 AM
link
Here is another article that might explain what animal is depicted, other than a kangaroo

However, several alternative identifications of this manuscript animal are possible, and in many respects the it resembles an aardvark much more than any kangaroo.

I have no other opinion on this topic, i just stumbled upon this while reading other stuff.
edit on 18-1-2014 by Mianeye because: (no reason given)


Yes, what the fox said.

When I looked at the pic I could see a resemblance to a kangaroo, but also to a rabbit, a fox, and any number of other animals or made-up animals. It's just the placement of the leg and the stance of the animal in the drawing that reminds viewers of a kangaroo, and doesn't mean it is one.

Here is a comparison shot of the picture, and a Red Kangaroo eating:

Note that the animals looks very similar. The arms appear effectively the same, as does the animal's head. The main differences you could probably point out are the legs and the lack of a neck in the drawing.

The lack of a neck could be simply due to the amount of space within the picture, or something else. But the legs i could probably explain.

Upon initial glance, the legs appear to be different between the two above pictures. But as can be seen in the following depiction, the legs on the drawing appear to have been defined by a darker line. You can see the line whereby the artist had drawn the animal's chest, which may appear to be it's thigh upon first glance. But after taking a second look, you will notice a distinguished, darker line which has a striking similarity to that of a kangaroo's thigh. when looking at it as a continuation of the animal's leg.

[Please note that all black lines are edits made by myself, to portray the location of which you will find the information i am stating]. 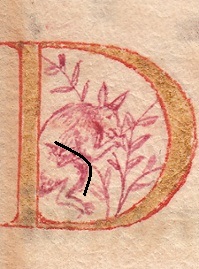 Here is a comparison of the above picture with that of a kangaroo. Note the same angles on the leg, and a long foot. Of most importance perhaps, is the large thigh (which does, in the drawing, actually appear larger than the animal's arm, as contradicted in the article) 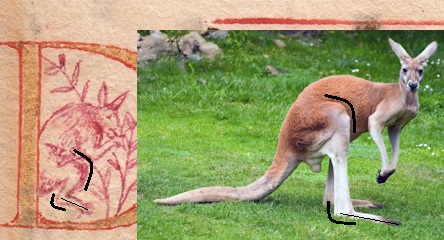 I think the picture is more likely to be a kangaroo, rather than any other animal.

The tail is a lot shorter than a Kangaroo.
Also consider the immense associations of that creature with the religious orders of that region and time period.

The Alexamenos graffito (also known as the graffito blasfemo)[1]:393 is an inscription carved in plaster on a wall near the Palatine Hill in Rome, now in the Palatine Antiquarium Museum. It is alleged to be among the earliest known pictorial representations of the Crucifixion of Jesus, together with some engraved gems.[2]

Ok now it connects this with the "Horse":


It seems to have been commonly believed at the time that Christians practiced onolatry (donkey-worship). That was based on the misconception that Jews worshipped a god in the form of a donkey, a prejudice of unclear origin. Tertullian, writing in the late 2nd or early 3rd century, reports that Christians, along with Jews, were accused of worshipping such a deity. He also mentions an apostate Jew who carried around Carthage a caricature of a Christian with ass's ears and hooves, labeled Deus Christianorum Onocoetes ("the God of the Christians begotten of an ass").[20]

Others have suggested that the graffito depicts worship of the Egyptian gods Anubis[8] or Seth,[21] or that the young man is actually engaged in a gnostic ceremony involving a horse-headed figure and that rather than a Greek upsilon it is a tau cross at the top right of the crucified figure.[1]:393-394

Horus the Horse of course.
I cover the horse motifs a lot in my 'Neptune' and 'Shade of the Sha' threads.
So if you read that stuff you could see how Horses, Wolves, Foxes, Rabbits, etc get all mixed up easily in myth oriented art.

I mention Rabbits due to the jointing of the animals appendages. It's similar as well.
The Easter Bunny ?

posted on Jan, 18 2014 @ 09:04 AM
link
Yes, the more I think about it I like the idea of a Donkey Rabbit hybrid.
Donkey wiki
Tons of connections, for example Donkeys are called "Jack".
Jackrabbit (Hare)

During this spring frenzy, hares can be seen "boxing"; one hare striking another with its paws (probably the origin of the term "mad as a March hare").

Both are "lethal strikes to the back of the head-neck"....

Could go on forever about that.
Neat though that "Boxing" is associated with: Kangaroos as well.
So who knows? Only the artist who created it?

posted on Jan, 18 2014 @ 09:35 AM
link
I believe its a brown hare.. rabbit
If it would be a kangaroo im sure they would have drawn tail too. Nobody draws a kangaroo without a tail

dollukka
I believe its a brown hare.. rabbit
If it would be a kangaroo im sure they would have drawn tail too. Nobody draws a kangaroo without a tail

thats because the drawer has it rump + tail hiding behind the D...

This is very interesting I believe that the Greeks got to Australia before any others.

apparently near were I live there is a ship wreck that is of Greek origin in bass straight.
Wish some how this could be verified, need a dive team to explore this possibility, its a urban myth that only a few people know..


If we have all these experts weighing in, why not me?

I say Kangaroo is a pretty good possibility. It does not look some mythical representation. Instead, a representation of something more real and mundane. You have the animal sitting there eating some leaves. Kangaroos eat leaves and such, yes? The head fits much more kangaroo than fox or rabbit or whatever. Aardvark is not bad but the legs are wrong. Besides Aardvark's eat ants and termites.

Now, to make the leap about who got to where-ever first, I don't know. I fully agree we are only scratching the surface of early history and may never have a clear picture. However, my vote is kangaroo. Those who disagree are God-less heathens, terrorist sympathizers, weak kneed, blind, and of a foul odor.


Rabbits do eat leaves and branches this is a common problem in gardens.. those do such a damage.

posted on Jan, 18 2014 @ 10:21 AM
link
To me it looks like a rabbit. I'd have to see the rest of the drawings in the book to say anything really because we don't know what level of artist the nun was. She could have just been a doodler, which I think explains why a bunny might look like a kangaroo, or she could be a skilled artist drawing a kangaroo from a distant memory. It's interesting either way.

Also entwined in letters of the text are two male figures adorned in tribal dress, baring naked torsos and crowns of leaves, which Ms Light said could be Aborigines. 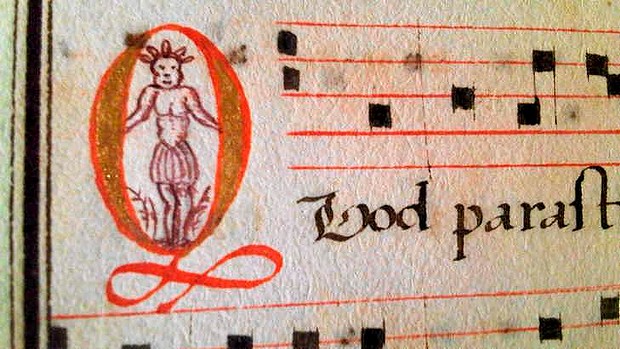 Compare the above image to a picture of individuals in Australian Aboriginal dress. 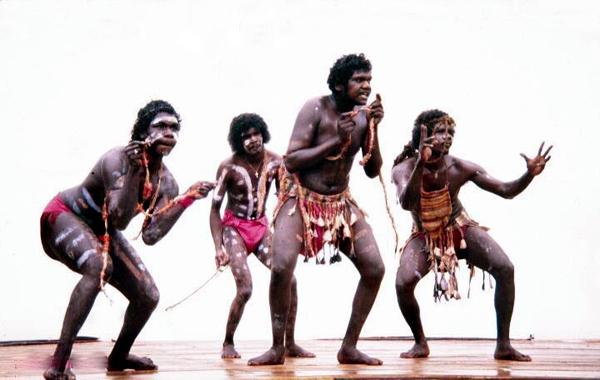 posted on Jan, 18 2014 @ 10:25 PM
link
The illustration could well show a kangaroo without providing evidence that the Portuguese beat the Dutch to Australia. The manuscript dates to between 1580 and 1620. Between 1509 and 1526, the Portuguese had arrived in parts of the East Indies, including New Guinea, which is home to a number of species of tree kangaroo. The depiction is not particularly accurate, but as already noted in the thread, all creatures at the time, even familiar ones, were fancifully represented.


They sure do. To me, if I had to pick between rabbit and kangaroo, kangaroo gets my vote. The legs just don't fit. Plus it kinda' looks like he/she is using the front paws to eat.

posted on Jan, 19 2014 @ 01:01 AM
link
The way it is depicted eating with both hands is very characteristic of a possum but wallabies will also eat like this. The body is kangaroo shaped and even though the article says the arms are the same size as the legs I don't think so, the arms are obviously smaller to me, unlike aardvark or dear. Rabbits have a different shaped body. However I grant that the way the head is positioned on the shoulders is not right. The other thing I doubt is that the person who drew it could have done so from descriptions, this person had to see it.

I don't think it was the nun who drew the depictions but she owned the book.

I am no expert but I don't think many aboriginals used head pieces like in the sketch of the native, but the ones in the far north, near New Guinea did.


I don't think it looks like a red kangaroo but more like a wallaby or something, the curve of the knee of the legs is not right. But remember did the person who drew this actually see one?
Do a google image search for "wallaby vs kangaroo".
edit on 19/1/14 by Cinrad because: (no reason given)

Cinrad
I don't think it looks like a red kangaroo but more like a wallaby or something, the curve of the knee of the legs is not right. But remember did the person who drew this actually see one?
Do a google image search for "wallaby vs kangaroo".
edit on 19/1/14 by Cinrad because: (no reason given)

I think it could be either - a kangaroo or a wallaby, as overall, both animals look fairly similar. And the picture is close enough to represent either of them.

I only used the Red Kangaroo as an example shot, as it was a close match to the angle depicted in the drawing.

I definitely think the drawing is of something from at least south-east Asia, if not Australia.
edit on 19-1-2014 by daaskapital because: (no reason given)