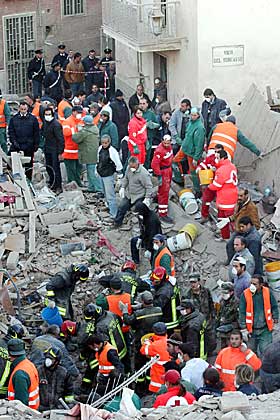 An explosion in southern Italy leveled a building, killing 8 and several are seriously injured. They think it might have been a gas explosion, but they´re not sure.

An explosion leveled a two-story apartment building in southern Italy early Saturday, killing eight residents and injuring six others, and firefighters were investigating whether a gas leak was to blame.

Fire Company Chief Vincenzo De Rosa, speaking by telephone from the scene, said the blast might have been caused by a gas leak, but it was too soon to tell.

The explosion, which occurred just after 3 a.m. local time, reduced the building to rubble, damaged cars parked nearby and hurled mattresses onto the street.