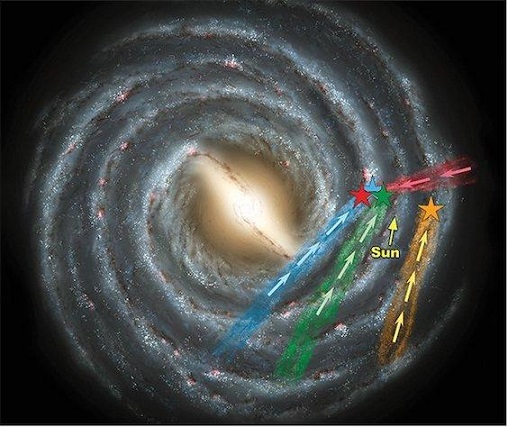 The colored bands show the general directions from which the stars have come from. These stars move at more than a million mph relative to the galaxy, fast enough to escape from its gravitational pull.


Hypervelocity stars are so called because, uh, they travel really fast—enough to break free from the galaxy. Astronomers have long known that this can happen when a binary star system gets caught in a black hole’s grip. Under the right circumstances, one of the stars spirals in toward the black hole while the other is violently flung outward at a tremendous speed.
Over the past decade, astronomers have found 18 such speedy blue stars in the Milky Way that could have been created this way, all tracing their birthplace to the supermassive black hole at the Galactic center. But an international team of researchers has now discovered a new batch of 20 sun-sized hypervelocity stars that don’t appear to originate from the Galactic core, presenting a mystery to astronomers about their origins. The study was presented at the annual meeting of the American Astronomical Society last week.

Well I am just wondering how long till Nibru myths get replaced by these. Pretty interesting nevertheless. Until now I didn't know there were such things I am pretty impressed by the speed for such massive objects.

I think that these rogues are the result of other black holes just like the one they already knew about. It would be real cool if they discovered they had planets orbiting them but I kind of doubt it. A good sci-fi author could make use of such ideas.


There is a catch though—measuring the speed of stars requires recording their positions accurately over decades. If a few of those measurements go wrong, the stars can seem to move a lot faster than they really do. But the researchers believe the majority of these candidates are real.

Next, they will verify the status of these stars and expand their search for more stars on the run.

source Popular Science
edit on 13-1-2014 by Grimpachi because: (no reason given)