posted on Dec, 25 2013 @ 07:57 PM
link
In recent years there has been an increase in noctilucent clouds over the polar regions, so much so that these high atmospheric clouds normally seen over the north and south poles during their respective summers, are commonly seen as far south as Utah and Colorado.

In the video at the following link, you'll see how NASA's AIM spacecraft is studying these clouds and the most recent explosion of the electric-blue are covering Antarctica.

Noctilucent clouds are Earth's highest clouds and are believed to be seeded by disintegrating meteoroids. This year's display started much earlier than usual on Nov. 20 and quickly spread out over the entire continent.

Data from NASA's AIM spacecraft show that noctilucent clouds are like a great “geophysical light bulb.”

They turn on every year in late spring, reaching almost full intensity over a period of no more than 5 to 10 days.

News flash: The bulb is glowing.

As December unfolds, a vast bank of noctilucent clouds is blanketing Antarctica. It started on Nov. 20th as a tiny puff of electric-blue and quickly expanded to overlie nearly the entire continent.

AIM is monitoring the progress of the clouds as they swirl and ripple around the south pole.

One of the greenhouse gases that has become more abundant in Earth's atmosphere since the 19th century is methane.

“When methane makes its way into the upper atmosphere, it is oxidized by a complex series of reactions to form water vapor,” explained Hampton University Professor James Russell, the principal investigator of AIM. “This extra water vapor is then available to grow ice crystals for NLCs.”

If this idea, one of several, is correct, noctilucent clouds are a sort of “canary in a coal mine” for one of the most important greenhouse gases. And that, says Russell, is a great reason to study them.

The article states that noctilucent clouds first appeared in the 19th century and have increased since the turn-of-the-century. Would make sense with methane increasing in our upper atmosphere.

IMO there is an abundance of moisture in all layers of the atmosphere right now, hence, all these torrential rains and heavy snow accumulations. Another thing that I believe you'll see more of these days is sun dogs, sun and moon halos, etc. All the beautiful displays in the skies. These are caused by the increased water vapor as well. I'm in Florida right now and have been for a month now and I've seen several sun dogs since I've been down here. Saw one yesterday just prior to the sun going down from Daytona Beach. I've never seen one at all prior to this year and now I've seen it at least a dozen times.


There's no pics but there is a cool video with the link. Sorry, never uploaded video on here yet.


Nice thread. Back in 2009, NASA was already creating these clouds artificially. Methane release is a serious issue but so is the constant tampering with the atmosphere (releases of lithium, aluminum, strontium etc.) These tamperings are also creating never-before-seen, once rare and now common situations.

An eerie cloud that glowed briefly in the night sky Saturday was no UFO. It was created by humans - more specifically a NASA rocket built to make clouds that shine at night. The rocket launched as part of an experiment to artificially create so-called noctilucent - or night-shining - clouds, the highest clouds on Earth. They naturally appear around 50 miles (80 km) above Earth?s high latitudes and are also known as polar mesospheric clouds.

So I guess we people of earth are getting it from both ends: the cow end and the rocket end.


So the article states that they are formed or believed to form from meteor dust which immediately has some folks saying it must be methane. Logical.


The article says they are seeded by disintegrating meteoroids. The sun shines on tiny ice crystals and creates the electric-blue clouds. So, I'm no scientist, but maybe the vapor from the methane is what allows the meteor dust to turn to ice crystals.


The article says they are seeded by disintegrating meteoroids. The sun shines on tiny ice crystals and creates the electric-blue clouds. So, I'm no scientist, but maybe the vapor from the methane is what allows the meteor dust to turn to ice crystals.


That's pretty much the way this article explains it too. And I'd just add that particles in rocket exhaust or payloads, like in the noctilucent cloud creation experiment link I previously put up, can take the place of the meteor dust.

NLC formation requires a combination of very low temperatures, a source of water vapour, and nuclei on which ice can grow.

Water Vapour The water vapour source is not known with certainty. The mesosphere is extremely dry but some water might be carried and across gaps in the tropopause and lofted upwards by atmospheric gravity waves. Another potential source is methane. This reacts in the stratosphere with hydroxyl radicals, OH, to form water molecules. Rocket exhausts deposit water into the mesosphere and some have been associated with specific later cloud formation but this is not considered a major effect.

NLCs displays are thought to be becoming more frequent, brighter and visible at lower latitudes. Human activities might be contributing. The summer mesopause is getting colder, possibly because of the cooling effect of increased atmospheric carbon dioxide concentrations. Methane concentrations and mesosphere humidity are also increasing.

Nice catch and neat to learn the details of!

posted on Dec, 25 2013 @ 10:43 PM
link
Meteor smoke. That seems like an unusual theory for the cause. Since it is the cause, makes me try not to think ISON smoke. Global warming or climate changes was the implied reason for the increased size, they make good points.

posted on Dec, 25 2013 @ 11:47 PM
link
I've seen some of these clouds in the last two years. They are really neat. I haven't ever seen them around here before, but I guess they aren't rare up by the poles. I hope this doesn't mean that we are now living in the new north pole.


Thanks for putting up the video, Wrabbit.


I'd never heard of these so I wanted to see what they looked like and they're awesome looking so I figured I'd put these up for anybody else who had never seen them. I know anyone could google it, but it's nice to have right here in the thread, I think.

These are not pictures of the specific cloud formation addressed in the OP. Just examples of the type. 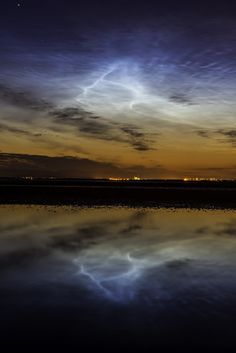 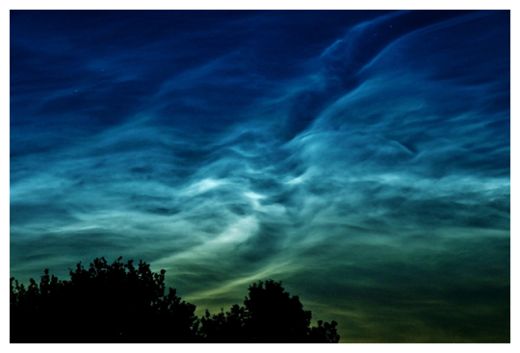 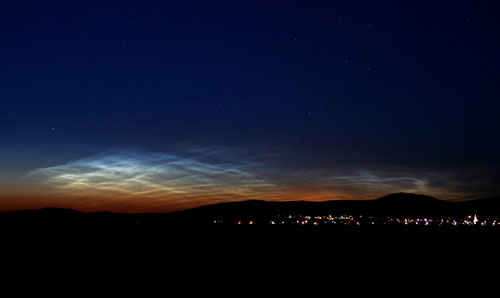 posted on Dec, 26 2013 @ 03:40 AM
link
Considering how many military bases exist on Antartica from so many differently (and hostile) nations can we be at all certain that this isn't something completely different explained away as a Notcilucent Cloud?

Also, didn't they just find diamonds there as a well. Seems like there is a lot of interest in the area, and if you consider it history from a conspiratorial standpoint it does leave one to wonder.


Thanks for putting up the video, Wrabbit.

Thank YOU for the time and effort you put into some really great threads. I'm waiting to hear more about your ongoing effort to understand the environmental changes. I think I enjoy those most, even if I'm not always 100% in agreement. The mark of a good writer, IMO.

posted on Dec, 26 2013 @ 01:08 PM
link
They are very new phenomena. There was NO records of them before the Krakatoa eruption in 1883. after the eruption noctilucent cloud were reported when people were looking for beautiful sunsets. So its unclear were the NLCs caused by eruption, or just more people looked for the skies. There was theories that they were caused by volcanic ash, but as years passed and the ash disappeared from atmosphere, the clouds remained.

Thebel
They are very new phenomena. There was NO records of them before the Krakatoa eruption in 1883. after the eruption noctilucent cloud were reported when people were looking for beautiful sunsets. So its unclear were the NLCs caused by eruption, or just more people looked for the skies. There was theories that they were caused by volcanic ash, but as years passed and the ash disappeared from atmosphere, the clouds remained.

A lot of methane gas is released from a volcanic eruption, let alone one as massive as Krakatoa. This would help explain the methane connection.

posted on Dec, 26 2013 @ 02:10 PM
link
On top of the geo-engeneering experiments that irresponsable so-called scientists do, I remember hearing about how metane is expulsed from ponds under the artic ice and how it would eventually create problems...

Well, here is one right now...I find the idea of these clouds eerie especially if they start expanding.
edit on 26-12-2013 by theMediator because: (no reason given)

theMediator
On top of the geo-engeneering experiments that irresponsable so-called scientists do, I remember hearing about how metane is expulsed from ponds under the artic ice and how it would eventually create problems...

Well, here is one right now...I find the idea of these clouds eerie especially if they start expanding.
edit on 26-12-2013 by theMediator because: (no reason given)


Yeah, I thought the same thing. No matter how cool it would be to see, it's still a bit strange.


IMO there is an abundance of moisture in all layers of the atmosphere right now, hence, all these torrential rains and heavy snow accumulations.

There would not really be a link between more water vapor in the mesosphere and heavier rain or snowfall at the surface. But in any case, there is no uniform increase/decrease in water vapor in any layer of the atmosphere.


It's curious that there is so little documented evidence for Noctilucent Clouds prior to 1884, but i found this.

Observations of increasing lower stratospheric H2O trends up to 2001, followed by decreasing trends thereafter, strongly suggest that 14 years is much too short a time for an analysis of its trends.

The findings herein from the HALOE dataset also support that contention for the mesosphere. As Garcia et al. [2007] argued, one may need 30-40 years of data before one can estimate a true secular trend in water vapor for the middle atmosphere.

Decreases in stratospheric water vapor after 2001.

Time series of stratospheric water vapor measurements by satellites and balloons show persistent low values beginning in 2001. Temperature observations show that the tropical tropopause has been anomalously cold during this period, and the observed water vapor changes (approximately 0.4 ppmv) are consistent with the temperature decreases (approximately 1 K).

The NASA Water Vapor Project (NVAP) dataset is a global (land and ocean) water vapor dataset created by merging multiple sources of atmospheric water vapor to form a global data base of total and layered precipitable water vapor. Under the NASA Making Earth Science Data Records for Research Environments (MEaSUREs) program, NVAP is being reprocessed and extended, increasing its 14-year coverage to include 22 years of data.

HALOE indicates decadal cycles in temperature, water vapor, and PMCs that are correlated with the 11-year solar cycle.

posted on Dec, 27 2013 @ 02:50 PM
link
Do these clouds glow on their own from an electrical charge, or do they simply reflect blue light from the sun?