posted on Dec, 18 2013 @ 05:35 PM
link
I have often wondered if there were people who, essentially, design the world. An example of what I mean by this would be the military stranglehold over the patent process ('national security" and whatnot). Technology is released to a contractor for use on something the government is wanting made public, or allowing to be made public. The German patent library that we pilfered at the end of WWII is an example of this, with patents being reviewed, and if agreed upon, released for public use. Some stuff didn't really come to fruition. 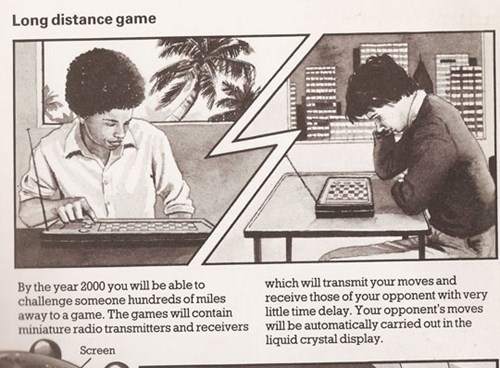 I am unsure when this was written. And often, these types of predictions when I was a kid ended up being so far off it was ridiculous. But this....this is 100% accurate with what we do today.

So i am curious for the two following pieces of input from my fellow ATS members:

- when did the above get printed? It looks to be 70's era, maybe early 80's. Not sure if that can be tracked down. My Google Fu is not even close to other members here.

My Google Fu is strong.

Where did the original idea of using video games for educational purpose come from?

How much of what we have today is something that was somebody's brain child from a bygone era? Probably a lot.

I am going to read through your stuff at some point today, and will check back in.


It's okay. Oh and I did go digging for the author of the book, himself. Ian Graham has written over 200 books but, curiously enough, doesn't even have a wiki. However, he does have an official website where he openly queries why anybody would even be interested in him, lol: www.ian-graham.co.uk...
www.andrewlownie.co.uk...
www.thistlepublishing.co.uk...

Here's a few thoughts on the whole computer and games thing. Whenever an new, emergent and disruptive innovation comes about, it behooves any entity to comprehend the effects it will have upon society, its business and etc. Kings and military leaders have ever gone to prophets and oracles for advice about changes afoot. The equivalent to that in today's world would be a futurist whose job is to foresee the road ahead and advise. Funny how things don't really change much overtime, eh?