This is an amazing scientific discovery, an actual tsunami record!

While studying the coast of Sumatra (the island where the Toba super volcano is also located), as they deem it a sensitive area at risk of severe inundations because of tectonic activity nearby, scientists discovered a cave that holds a very accurate and visible record of tsunamis in that part of the world. It lies 300 meters back from the shore and slightly elevated above the high tide mark so that only tsunamis and severe storms can leave deposits.

There is much to learn as they examine all the treasure trove for deposits from the ocean floor such as molluscs and pieces of charcoal from old human-lit fires. They are also examining the bat guano deposits to learn all they can about the diet of the bats over time.


A cave on the northwestern coast of Sumatra holds a remarkable record of big tsunamis in the Indian Ocean.

"The tsunami sands just jump right out at you because they're separated by guano layers. There's no confusing the stratigraphy (layering)," explains Dr Jessica Pilarczyk. 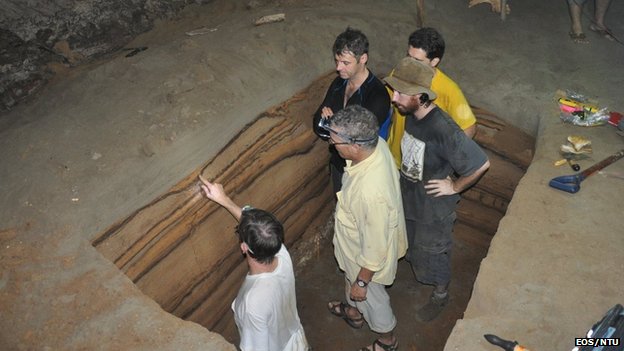 "What we think we have is actually a near-complete sequence of late-Holocene deposits. This is amazing because usually the records we have are fragmentary at best. This coastal cave is a unique 'depot centre', and it's giving us a remarkable snapshot of several thousands of years, allowing us to figure out every single tsunami that would have taken place during that time," said Dr Pilarczyk, who is affiliated also to Rutgers University, US.

The 2004 tsunami completely inundated the cave and probably removed some surface deposits. However the team's other investigations along the Acehnese coast are filling in the period from 3,000 years ago to the present.

should also be mandatory reading for young earth creationists

posted on Dec, 14 2013 @ 05:12 AM
link
The way the strata is layered they should be able to come up with time frames for deposits. Kinda like Yellowstone eruption averages.. It says 'when' it happened but not necessarily 'when' the next one will appear. Thanks for posting.

should also be mandatory reading for young earth creationists


I know the article says the stratigraphic layers date back to 7500 BP, but still what's a few couple centuries among friends.

Thanks for posting this Aboutface. S&F