posted on Dec, 13 2013 @ 01:20 PM
link
Wim Van Utrecht is a Belgian investigator of "Unidentified Aerial Phenomena." A description from his site:


CAELESTIA was initiated in 1994. Its purpose: to collect, investigate and document reports of unidentified aerial phenomena. The name CAELESTIA is borrowed from Latin and can best be translated as "affairs of the heavens". The general idea behind the initiative was - and still is - that reports of "Unidentified Flying Objects" deserve a more correct treatment, be it from the scientific community or from the UFO community itself. 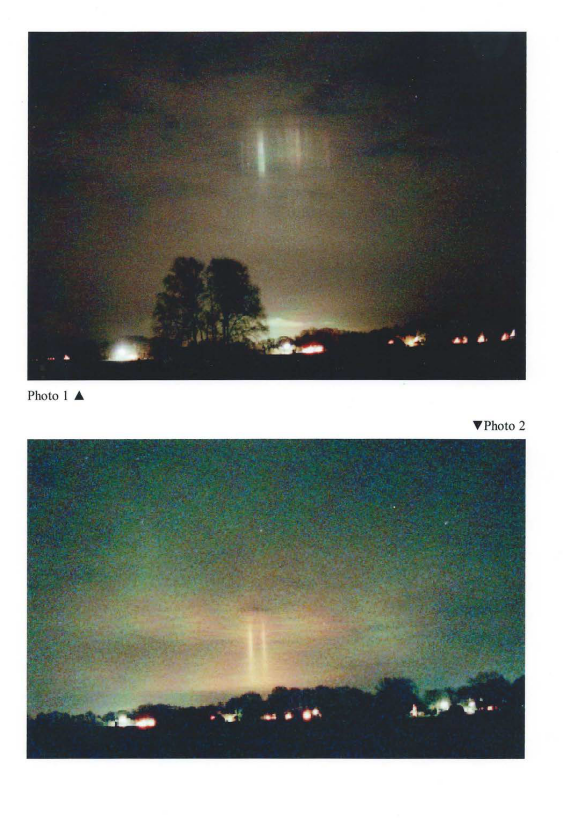 Wim's special area of interest is what he terms "Light Pillars," a real phenomenon generally caused by light reflection of ice crystals in clouds. The more spectacular light pillars are caused by reflection of flames produced at chemical plants. Wim examined the famous UFO case, the Cash-Landrum incident in 2002, but his report was left unfinished, until revived by UK researcher Isaac Koi. It was published at Blue Blurry Lines and instantly came under attack by believers and skeptics alike. Skeptic Tim Printy was among those who questioned the validity of light pillars in this case, and was interested enough to contribute historical weather data to be evaluated. There was a second piece reevaluating the weather records, and afterwards, Wim wrote a final piece which provided further cases for comparison and responded to the criticism.

It's a lengthy read, but a serious, look at genuine stimulus that can be reported as UFOs. Even if it doesn't provide the final answer for the Cash-Landrum case, the lessons can be applied to other cases, and perhaps some reports of supernatural or spiritual apparitions.

The Weather: Evidence in the Cash-Landrum UFO Case

I think it's an outstanding work, and Wim's work certainly deserves a wider audience. Pleas take a look and share your comments.

I vagually remember some pictures and reports from US soldiers in Iraq seeing light pillars as well!

posted on Dec, 13 2013 @ 01:32 PM
link
I remember seeing brilliant light pillars on an icy Midwestern night above a highway truck stop in Iowa. Very pretty and it could be seen for miles and miles.

I also once saw a dancing group of light beams above the horizon of Lake Michigan. Like angels.

posted on Dec, 13 2013 @ 04:41 PM
link
Great thread OP I always have been fascinated by this phenomenon . Mostly because it looks like it's from the last couple of years that this phenomena surfaced more frequently, like moondogs , sundogs double sundogs double rainbows lenticular clouds etc. What this could be I don't really know but I think Geo engineering could be the potential suspect IMO..


While that would be one way of investigating mysterious aerial phenomena, it has a major flaw in that it is singling out one particular type of phenomena that about everyone could accept simply on the face of it: Mysterious ight distortion is possible and need not necessarily be a physical presence of some unknown type.

The best that could be hoped for from such a narrow-minded study is that he can prove that such light phenomena does happen at times. Would any shred of that disprove physical UFOs? Nope. Nada.

His would get the same result if his target was to prove that "Chinese lanterns" were UFOs. His certifiable result would be a resounding YES (in some cases) but would absolutely prove nothing germaine to the situation as a whole. UFOs are pretty much as the represent themselves to be. Get over it, science people!

Yet, I continually have to point out that even the "nay-sayers" are worthy to the over-all cause. First, because they will never prove their "something else other than alien craft." opinions, and that keeps narrowing the focus down on the craft being recognized for what they actually are.

The public will take an example such as this one under discussion and via common sense say, "Nay, that can't explain the whole business of UFOs" and unconsciously their acceptance of UFOs and distrust of the often voiced opinions of scientists on that particular matter will be diminished. The result is more tacit support and evidence for a general belief in UFOs. In wise circles, they call that using reversed psychology whether intentionally done or not.

I vagually remember some pictures and reports from US soldiers in Iraq seeing light pillars as well!


Interesting- if you remember where you saw it, please post it. I'd like to see if I can track down photos or video of this.

And they have it from an ATS topic :-)