posted on Dec, 10 2013 @ 02:38 AM
link
A video entitled "Instant Karma: Dude Tries To Knock Woman Out But Ends Up Getting Rocked By Her And Her Boyfriend In Las Vegas!" uploaded to wordstarhiphop.com on Sunday has been making the rounds all over the Internet. Garnering millions of views on video tube sites, the video quickly went viral with the usual onslaught of social media sharing and re-posts before being quickly picked up by "news" sites and blogs. 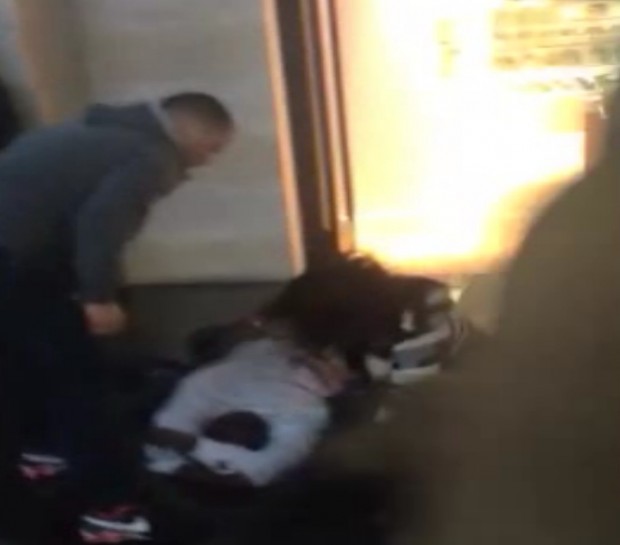 The cellphone video shows what appears to be a black male teen running through a busy Las Vegas mall on a trajectory to intercept (and sucker punch) an unsuspecting white (middle aged?) female shopper. Just as the supposed attacker reaches his alleged victim, the whole scene conveniently moves out of frame for half a second before the camera refocuses on the would-be perpetrator, now on the ground with the "victim" atop him raining down blow after blow of righteous fury! In the next half second, the purported boyfriend of the "victim" enters from left of frame and punts the hapless hooligan in the face with a resounding thwack.

For me, several things immediately seemed strange--the first telltale sign that something is amiss is probably the fact that the only fraction of a second not caught in the video is when the punch to the unsuspecting victim would have been delivered and the "victim's" subsequent inhuman recovery and reflexive jujitsu take down that would have been required for this woman to end up straddling her much larger male "attacker." The time from the supposed (and unseen) punch to the woman commencing her mock beatdown is less than two seconds. Here is this section of video converted into an animated GIF with a frame rate 20% of the original video:

It's not even two full seconds after this clip that the kick to the face occurs.

The person filming the event is obviously aware of what is going on as he begins filming the "perpetrator" before he begins his 30 foot sprint and remarks "here we go" just as the running begins. This alone isn't a problem as some of these "Knockout Game" incidents have been recorded by accomplices because stupid criminals love filming each other doing stupid things, but the man's reaction when the "game" apparently goes horribly wrong is so off that it's unbelievable--he doesn't run, he doesn't try to assist his cohort, etc.

Of less significance, I felt the location itself didn't seem a likely one for a "Knockout Game" attack. A mall crowded with holiday shoppers, mall security, cameras, etc just doesn't fit the profile of the attacks that have been featured in the news which have almost all occurred on city sidewalks.

I came across an updated article on TheBlaze.com and it appears my suspicions have been confirmed:

Editor’s Note: This story has been updated to reflect comments from the Las Vegas Police Department.

An incident depicted in a viral video Sunday showing a woman thoroughly beat an assailant who appeared to sneak up behind her is not related to the notorious “knockout game,” authorities said.

Las Vegas Police Department spokesman Larry Hadfield told TheBlaze Monday it appears the involved individuals had contact with each other before.

“This incident does not suggest it would be related to any random incident like a ‘knockout’ type game,” he said, noting it “remains under investigation.”


Nevertheless, police said the victim does not want to prosecute and no serious injuries were reported.

Kudos to The Blaze for updating their article. Here's a sample of the many sources I pulled up in the first few pages of a Google search who are far less concerned with integrity and reporting the truth:

Unfortunately the nature of the attacks means that the perpetrators get away most of the time, which is sad but thats the game.


Yeah, somebody or some bodies would like us to believe that this "knock out game" is a real thing.
Why is that??
I have a few suspicions but hey, I'm just the nutty conspiracy theorist, right?
There was a story a bit back here on ATS about another "knock out game" mishap.
I picked that story apart from word one.
We don't need more fearmongering, there is already more than enough, and some of it real!
Keep your wits about you, cooler heads prevail.

Because its called boxing and takes actual skill.

posted on Dec, 10 2013 @ 04:23 AM
link
I don't see the reason in telling people it's fake (even if it is)… Whether believable or not, this was a good instructional video of what can happen to you if you are dumb enough to run up and hit innocent people in the face for no reason.