Extraterrestrial presence in our solar system?

posted on Dec, 9 2013 @ 04:29 PM
link
We know that comet ISON has been fallen apart but the blackout to some seems somehow strange . That's also something that we can't think lightly off I guess.and I try to understand what's going on to enumerate all the facts together and try to do some research myself.

So I watched two video's from this guy BPEarthWatch who everybody knows by now on youtube right?
Have a look at it ...

lol..people he now warns to sent your children out of the room it's really getting nasty here..
here we go part 2...

Looking at his profile he seems to be a real believer about Nibiru and one of the latest images that was presented by members and also SOHO took some really weird video's that got everybodies attention and still does. I really don't know how serious this all could be but I want to have some answers for myself..

So I looked at the full perihelion journey of ISON and I do think I discovered after Ison passed the sun, it looked like the tail of ison reacted on something in the background if not the very discussed sphere like object? 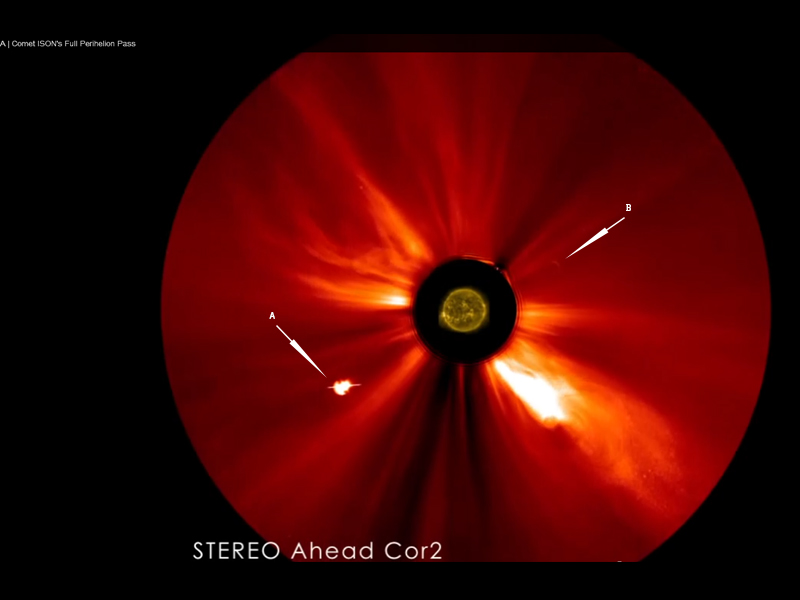 at point A I think thats Venus but looking at point B I can't really say what that is? 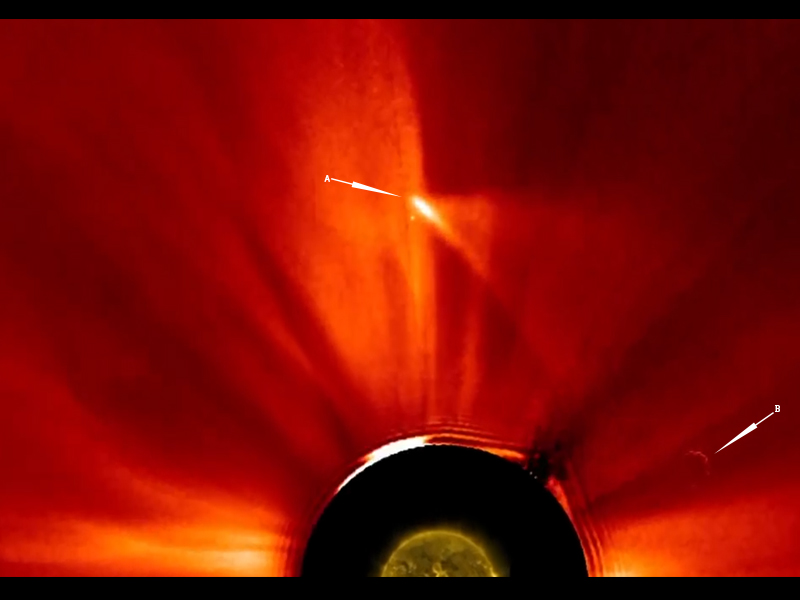 second Image point A = Ison
Point B = ?
But it looks like the sperical thing this BpEarthwatch talking about?
Now watch the SOHO Video and shift to 1:02 minutes.

SOHO ISON Full perihelion journey
I couldn't inbedded this video so enlarge HD and go to 1:02..

Then this news bumped into me and I thought could this have any relation with everything thats happening at the moment?


The hearing’s charter states that, “With the discovery of potential Earth-like planets outside of our Solar System, the hearing will also investigate what methods are being used to determine if any of these planets may harbor life. The hearing will explore existing and planned astrobiology research strategies and roadmaps.”


Smith, chair of the House Committee on Science, Space and Technology, will lead “Astrobiology: Search for Biosignatures in our Solar System and Beyond?”


The hearing will include a general assessment of the multi - and interdisciplinary nature of astrobiology research, inc luding the role astrobiology plays in formulating NASA space missions. It will also examine the techniques and capabilities necessary to determine the potential for the existence of biosignatures within our Solar System.

Then Scientists going to warn that we may have soon have huge solar activities that could lead to allot of disruption on our communication and every electronics we have what a great timing to do something if were in the blind?

A massive ejection of material from the sun initially traveling at over 7 million miles per hour that narrowly missed Earth last year is an event solar scientists hope will open the eyes of policymakers regarding the impacts and mitigation of severe space weather, says a University of Colorado Boulder professor. The coronal mass ejection, or CME, event was likely more powerful than the famous Carrington storm of 1859, when the sun blasted Earth’s atmosphere hard enough twice to light up the sky from the North Pole to Central America and allowed New Englanders to read their newspapers at night by aurora light, said CU-Boulder Professor Daniel Baker. Had it hit Earth, the July 2012 event likely would have created a technological disaster by short-circuiting satellites, power grids, ground communication equipment and even threatening the health of astronauts and aircraft crews, he said. - See more at: www.colorado.edu...

Did something blocked the outburst?
Does it this somehow adds up within everything we seeing now I don't know but it's an interesting time were living in.
Can anyone recognize the things I'm presenting here? or does it all balance on coincidences in nature and artifacts?


Let's hope the gifts are promising or nothing at all ....Maybe the season of the year brings all the fairytale to the people young and old I don't know?


I was expecting Christmas presents. I didn't realize I could get extraterrestrial presents as well?


Maybe a piece of ISON? I'll bet it's worth allot of money

posted on Dec, 9 2013 @ 05:55 PM
link
That sphere reminds me of a similar,possibly the same sphere sucking energy from the sun shot a while back.
Could be the same thing? We are a pet race, an experiment...being watched, constantly.

OP, I gave you a present of a flag for your thread.


Grow up you bunch of children, its just one 's' out

I loathe the grammarnazis and the typo-phobiacs as much as the next guy, but it is delicious seeing one misspeller being defended by another.

It really does cast at least a shadow of a doubt on their scholarship. Or at least, provide giggles at the wrong moment.


Lol, no I was speaking out of my anus, glad nobody noticed.

*suspiciously shuffles out of back door*


Grow up you bunch of children, its just one 's' out

I loathe the grammarnazis and the typo-phobiacs as much as the next guy, but it is delicious seeing one misspeller being defended by another.

It really does cast at least a shadow of a doubt on their scholarship. Or at least, provide giggles at the wrong moment.

Yes, its hilarious how "extraterrestrial presents" rather than "extraterrestrials present" can cause so much glee. I also think it helps to put a smiley face icon next to your comment, so that people know your not totally serious. I was just commenting due to the amount of "jokey" responses there were as OP had made a good thread and it would have been unfair for it to be overlooked because of the silly typo.

So giggles aside, how about back on track?