According to former agency officials quoted by the newspaper, morale is down across the board and frustrations with President Barack Obama are running high in the months since government contractor Edward Snowden leaked documents on the agency's covert practices.

“The agency, from top to bottom, leadership to rank and file, feels that it is had no support from the White House even though it’s been carrying out publicly approved intelligence missions,” said Joel Brenner, NSA inspector general from 2002 to 2006. “They feel they’ve been hung out to dry, and they’re right.”

This is amazing: morale is low and the NSA IG is concerned. Where do I begin with that statement? The temerity is astounding. The folks running the NSA really feel they are being neglected. Never mind a budget that is bigger than some countries GDP. Never mind they have access to, well, everything. Never mind if there is a law which gets in their way, the administration has their back and looks the other way.

What do they want? A parade? An NSA action figure set sold at White House tours? And publicly approved intelligence missions? WTF does that mean? I do not recall that ever showing up as a ballot initiative. Damn that Snowden! Doesn't he realize how many feelings he has hurt?

The more conspiratorial side of me sees this as veiled extortion. The NSA has the goods on everyone. So perhaps that lack of 'love' from Obama for our 'intelligence workers' is just insider speak for 'we need more money or else'.

even though it’s been carrying out publicly approved intelligence missions

It hasn't though. Congress was lied too about the scope of what the NSA was doing and most "approval" takes place in secret courts.

No one in the public can approve what they are doing anyway, it's illegal.

I say they are in for a lot more hurt feelings to realize a high % of this nation would like nothing more than to see them FIRED to the last person, their agency disbanded and a fair number of them, retiring with an inmate number and a cell assignment.

They have low Morale? Do the nation a service...QUIT and help FIX what may not even be fixable..but hearing the NSA cry out Morale is like hearing Manson whine about his prison cell conditions... 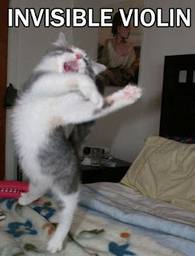 Just imagine my feline friend is playing a world class rendition of 'So Sowwy'....and we have it.

Then maybe start spying on the politicians and release information regarding their private communications. I won't lose any sleep over the fact their morale is low, but maybe the politicians should?

I am sure moral is low.

These guys wiped their a$$ with the Constitution.

Now it's time for the Agency to be ended.

It's a red herring because Obama is 100% in favor of the totalitarian agenda.

xuenchen
The HuffPost article is just a standard psy-ops to make people *Think* that Obama is somehow 'against' the NSA.

It's a red herring because Obama is 100% in favor of the totalitarian agenda.

G,day mate. BINGO. Ladies and gents we have a winner. Well spoken bloke.
Publicly approved intel missions. PIFFLE, POPPYCOCK AND BLOODY RUBBISH.
Morale is low. Give each of them an all day sucker. (Large round multi coloured candy on a stick).
REASON. As that is what they are, suckers all day every day
Why. - for believing that spying on the general population all day every day is ok. PIGS might fly its ok.
Two other comments come to mind.
1. I hope all their chooks turn into emu's and kick their dunny down.
2. In disney's animated robin hood the fox said. pox on the sheriff of Nottingham. change the words. it works for me mate.


What do they want?

Obama to give them a big hug?

For the public to shower them in praise and gifts like heros for spying on us all?

What do they want? A parade? An NSA action figure set sold at White House tours?

Unconstitutional, unconscionable, unethical, overpaid, benefits out the ying yang and they're not happy?
What are they bored with RL pr0n now?
Don't tell me they're suddenly growing a conscience about this.
What they do makes a dandy way to keep Congress critters in line, finding the dirt on them then controlling their votes.
Had they been of any use 9/11 never would have happened.
Fire everyone in the NSA, CIA, FBI, State department and Pentagon that let that go down.
The only people held accountable any more are the taxpayers of this Nation.


Na the NSA action figure with real working camera, lets you spy on your parents for us

Maybe a do it yourself home hacking kit for thr older kids? Or a bug your freinds house starter kit?

Maybe a make your own reaper drone ? Hellfire missles sold seprately......
edit on 9-12-2013 by crazyewok because: (no reason given)

Just in time for the holidays!

posted on Dec, 9 2013 @ 03:31 PM
link
Maybe if the morale gets any lower, they can start selling tidbits to the highest bidder and other actions of people who generally just don't give a crap anymore.

Then, we might start finding out a lot more about what's really going on.


Ah... the reverse psych thing. Could be.

There is little doubt the actions of the NSA are accomplished with plenty of support in DC. Whether that is through acquiescence, intimidation, or pure negligence is the question.

The idea they (the NSA and/or the administration) have to scheme on this matter to save face with the American people seems a little far fetched to me. Elvis left the building. The bridge is burnt. The fat lady sang. Whatever cliche we want to use, there is little hope of swaying anybody.

It truly could be there are enough dupes out there to whom 'Obama doesn't love us enough' might mean something. It just seems very off-message. Morale really could be down at the NSA because Big-O has been bad mouthing them (never mind giving them cart blanche out of the other side of his mouth).

Maybe those who are doing all the spying on the rest of the planet do not feel appreciated enough for their 'heroic' efforts, leaving them staring at the ceiling at night wondering why America does not really see how awesome they are.

There's a lot of hatred and anger coming their way. They have to be getting it with both barrels and on all sides. What's going on has no popular support anywhere. It's something so bad that it broke the traditional partisan boundaries in Congress, even.

Something like that tends to wear down all but the toughest psyches.


Great observation. You gotta know it that information is definitely a commodity to be traded.