posted on Dec, 1 2013 @ 10:43 AM
link
The large, round object could be some sort of imaging artifact. The page linked below gives many examples of artifacts seen in images from this instrument. I looked through these without finding any that appeared convincingly like the one under discussion here.
The remarks about the way a sphere should be lighted by the Sun, to the right, are well taken. It occurs to me, though, that a sphere that was intrinsically darker in the lower part, as seen in this image, could appear like this. Will look into the possibility of inquiring about the image further, and report back here if anything is learned.
stereo.gsfc.nasa.gov...
edit on 1-12-2013 by Ross 54 because: corrected error in link address
edit on 1-12-2013 by Ross 54 because: corrected error in link address

posted on Dec, 1 2013 @ 11:49 AM
link
Looking at the series of images, a lens flare seems more probable. I see a thin ring or halo around the 'object' at about one radii. The 'object' does seem to move gradually to the left a bit. The light values appear to be rather oddly rendered, rapidly switching from positive to negative.


That is definitely Cheesy, sitting on top of that thing, trying to get us the best pics and the truth! God love him. 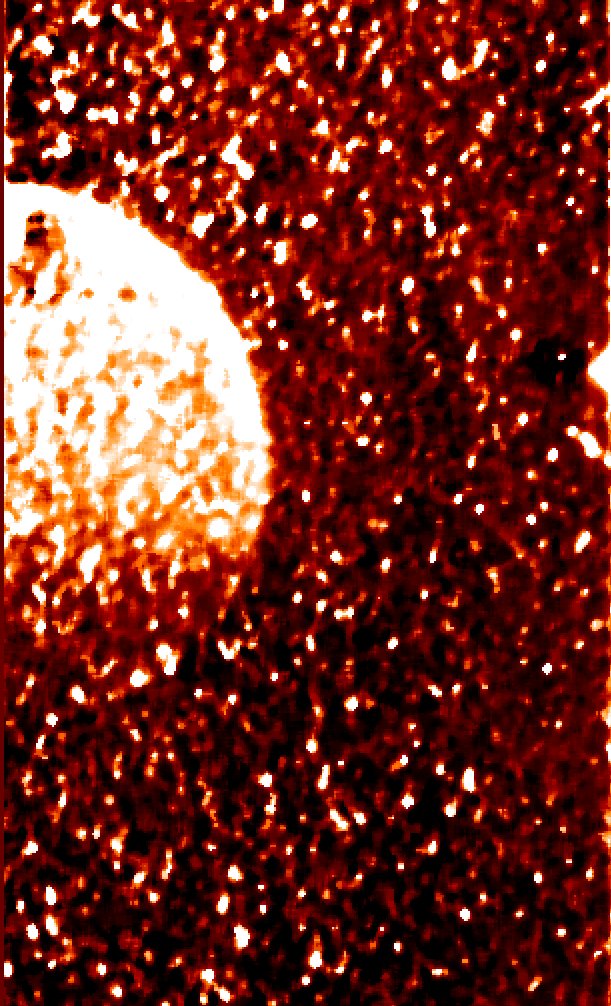 As you can see it doesn't "move" into the field of view, but just arrives in place and FADES out gradually. 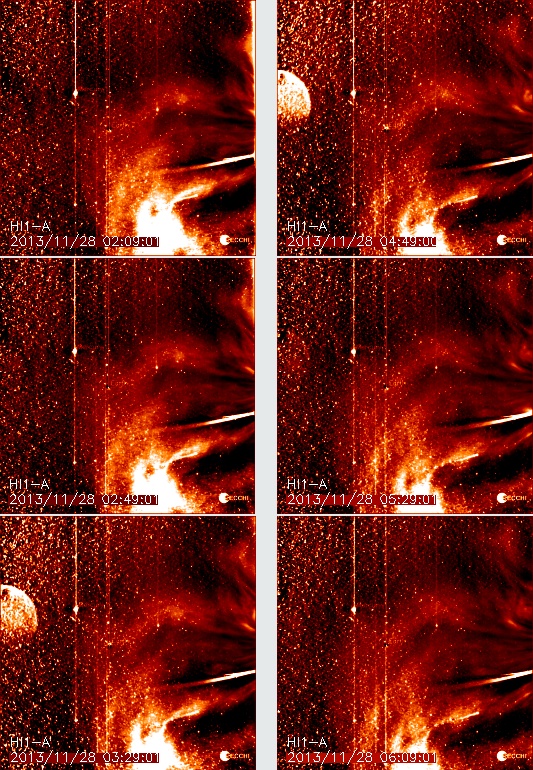 No, did see what you just described, just arrives, fades in and out of view.

but its hiding because You and other skeptical people are viewing the image.


If we turn our heads and believers keep looking, it should pop up again

I was a little worried about this. Will we be ok?
Thank you kindly.


I think we're pretty okay, if that object was real we would be history due to gravity forces


I think they rolled the spacecraft 180 degrees putting the sun on the opposite side of the image,which left some kind of retention. Either that or its a spacecraft close to the camera. If it was anything like a planet we would have seen in in the sky. So yes we will be alright.

haven123
gif image of it

Okay. I know I am going to regret sharing this experience here. I had promised myself I was going to take this memory to my grave without saying anything to anyone about it, but here it goes.

I spent Thanksgiving up in the mountains with family. My family is quite large and I have always had a love of the sky and books, earning me the labels of "bookworm", "nerd", "geek" and now the "info junkie".

No one was interested in sky watching, and none were surprised that I was outside with several binoculars mapping the sky. When it was time to gather everyone for the the pre meal blessings I went in the house. The upstairs was packed and the little ones were in and out and all about, so I decided to put my binoculars away some place safe and took them downstairs to my bedroom. As I turned to walk out the door I caught a glimpse of a large round object in the sky just below the sun. It stopped me dead in my tracks.

My reaction was one of great doubt. I asked myself what the hell is it? It was difficult to keep it in view because the sun was so bright and I had to look in the direction sun without looking directly at the sun. I didn't have any special filters to aid in identifying what I was looking at.

I decided it had to be a reflection coming through the glass, so I went outside. Now I had the deck over my head blocking out my direct view of the sun, I didn't see it again right away because I was looking in the wrong direction. In fact I had to go back in the house to see if it was still there and it was, but it was much further from the sun then was where I had been looking. I went back outside and tried to find it again and unfortunately I was able to see it without the window being in the way. Tried to see with the binoculars, it was tricky, but I could see it. I puzzled over that object for at least 15 minutes because my Mom and sister came hunting for me.

I started to show them, but something held me back. I decided I would show my family after we had eaten. Later I thought about it and decided I didn't have enough information to say anything. I spent the rest of the afternoon trying to find someone or something on the net about it. I didn't see or hear anything so I have tried to push it out of my mind until I find a reasonable explanation for what I saw.

It looked exactly like the sphere in the picture. Just put it in a blue sky with a big sun beside it, but put it below the sun, the same distance but on the right side not the left. It didn't emit rays like the sun and I know it sound crazy but it seemed to look like it would be cold if you were near it.

I kept replaying the warning they gave about viewing the event; "Under no circumstances, attempt to view ISON's journey to the sun."Watch the event on your computer". I hope someone somewhere so saw it and I hope someone has decent equipment and was able to catch a picture of it.

Sure make you think

I hate that glasses Smiley. Makes the user look cocky as if they've found something that no one else could see.

Sure make you think

here is the url, I cant post it as a link
______beforeitsnews/space/2013/12/comet-ison-update-isons-closest-pass-to-the-sun-comet-ison-nasa-image-exploded-2470984.html

While others are saying , it is some image artifact sheites, you have actually
seen this object with naked eyes, makes it very significant indeed.

While others are saying , it is some image artifact sheites, you have actually
seen this object with naked eyes, makes it very significant indeed.

Whatever he saw may not be the same thing in the OP's image.

As I mentioned before, the object is not lit properly to be really there, considering the location of the Sun (which, going by the CMEs and solar wind rays, is just out of frame to the right center).


The object may be improperly lit, but it is still lit like
a 3 D object, whereas a camera anomaly would show a hopelessly
2 D artifact imo.

Angelic Resurrection
reply to post by Soylent Green Is People


The object may be improperly lit, but it is still lit like
a 3 D object, whereas a camera anomaly would show a hopelessly
2 D artifact imo.


Any round artifact (whether it be a camera artifact or some other artifact caused by the data acquisition of the STEREO spacecraft) that is brighter on one side that the other can look like a 3D sphere. That doesn't make it a 3D sphere.

If it was really there, then why do we see it almost faded away and transparent in subsequent images taken around the same time as the OP's image?

As I said before, I am clueless to what it was. I also said I would not even attempt to guess. While not really guessing but exploring possibilities, I would like to throw out a wild question. I know very little about cameras nor telescopes, so if this is a ridiculously stupid question, I will take my licks, but please be gentle.

Is if possible for a camera or telescope to project an anomaly or artifact; similar to the likes of projecting a movie or hologram, by accident?

With the comet being described as unusually bright, and the sun being amazingly bright from another angle, could it cause an image to be reflected as a solid image from the lens of the devices?

If two bright objects are shining on the same object, would it cast an altered shadow or create a reflected image that appears real?

I am doing a lousy job of trying to explain what I am trying to ask, but is anything like this possible.