The oldest known stone-tipped projectiles have been discovered in Ethiopia. The javelins are roughly 280,000 years old and predate the earliest known fossils of our species, Homo sapiens, by about 80,000 years. 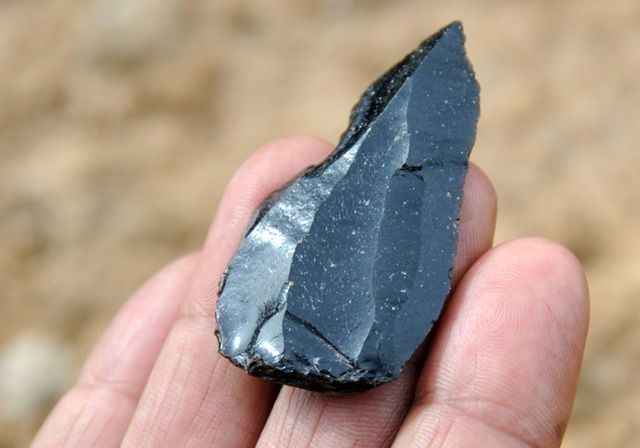 These javelins are some 200,000 years older than previous examples of similar weapons, suggesting that modern humans and their extinct relatives had the know-how to create these sorts of complex thrown projectiles much earlier than often thought.

"Today, the area represents a ridge overlooking one of the four lakes in the vicinity, Lake Ziway," said researcher Yonatan Sahle, an archaeologist at the University of California, Berkeley. (See "Stone Spear Tips Surprisingly Old—'Like Finding iPods in Ancient Rome.' ")

During much of the Middle Pleistocene, about 125,000 to 780,000 years ago, "the area was overlooking an even bigger paleolake—a megalake composed of today's four separate lakes." Antelope and hippo remains have been recovered from the grassy, forested site.

I have a feeling the article title will probably draw in some in hope this is about disproving evolution. Far from it this is about our origins science is constantly questioning evolutionary theories trying to gain a better understanding of how we evolved and the mechanisms that drove us to become what we are now when new evidence is discovered it is incorporated into our current understanding it isn’t rigid or dogma.

Now for those genuinely interested in our ancient origins this article should be fairly interesting. My personal take on the subject is that when we acquired the ability to communicate is the point where our species was able to make leaps and bounds hence the next part of the article. Here is a link to a thread I wrote on the last discovery of this nature I read up on. I think there is still a question of which species acquired the knowledge first on how to use stone tools. It is very possible that Homo Heidelbergensis was the first to use stone tools see pic below. 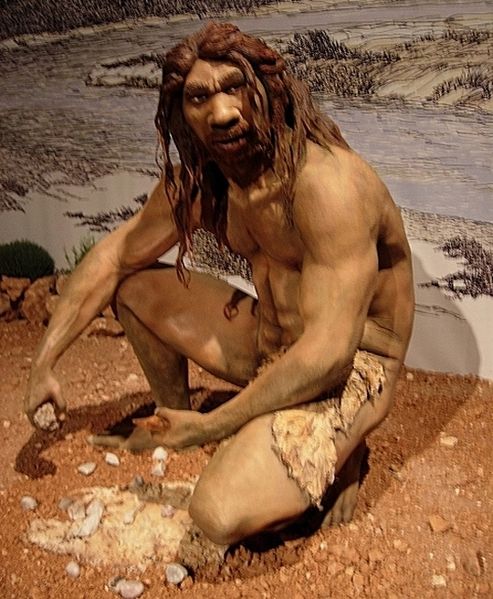 
The creator of the most ancient obsidian javelins found at Gademotta was probably Homo heidelbergensis, the most likely ancestor to modern humans and Neanderthals, Sahle said. There may be no way to determine whether Homo sapiens discovered how to make these weapons independently or if they learned how to do so from Homo heidelbergensis.

Shea noted many complex behaviors started appearing between 200,000 and 300,000 years ago. "You see a shift in anatomical structures that would have allowed us to speak, and a shift toward more complex tools," he said. "I think the advances seen here in tools have to do with the emergence of language."

Shea cautioned not to read too much into the fact that these findings were made in Ethiopia. "It's often assumed that the earliest discovery of anything is the first instance of anything," Shea said. "This is just the oldest example we have so far of this technology—it doesn't mean that this is where it first evolved."

He suggested similar research could be conducted at other sites "to see how widespread similar points are, to see if everyone at this time is doing the same thing or if there are regional differences."

In the future, the researchers would like to discover when humans began using even more complex mechanically propelled weapons, such as the bow and arrow, and the spear-thrower known as the atlatl, which may have been developed between 60,000 and 100,000 years ago. These weapons may have helped modern humans expand out of Africa and outcompete Neanderthals, they noted.

posted on Nov, 28 2013 @ 07:33 PM
link
With all the branches in the evolutionary tree, not too mention differences in culture (in modern times there were still people living in huts somewhere), I simply don't see why it's entirely implausible someone picked up a stick and said to themselves (internal grunt noises) "Hmm, me kill food easy with stick and rock".

Doesn't mean everyone figured out this elaborate scientific field though.


(EDIT: I was busy writing this before I saw the post above mine. His guys and my guys thought alike, looking at rocks, so if two posters thought alike during the same few minutes, what do you think all these almost humans could do with a tens of thousands of years to play with? Yeah, rock things, no problem.)


Good thread, and of course humans or human-like guys knew how to make things out of stone. All you needed was one guy, in a moment of creativity, cutting himself on a sharp stone and thinking "Hmmmmmmmm....I wonder....???" and putting two and two together to make a rock knife. Then another guy a few thousand years later thought about sticking the rock on a stick. And throwing it around. Soon, you've have all the ancient almost-humans chipping and throwing and before you know it and right where it hurts, pow, javelins and hammers and arrowheads and things made of rock all over the dern place. And then the women were impressed, which is what it was all about anyway.
edit on 28-11-2013 by Aleister because: (no reason given)


It's always aliens, or gods, or both one and the same.

Mankind was, is, and always will be too stupid to figure out anything on its own without outside help, even back to carving out and stacking rocks on top of one another.


All you needed was one guy, in a moment of creativity, cutting himself on a sharp stone and thinking "Hmmmmmmmm....I wonder....???" and putting two and two together to make a rock knife.


Knapping stone points is a lot more complex than that.

Ever try it? Even with opposable thumbs its tough.

However nothing in it suggests a "Javelin" which would be a throwing type of stick or spear. The article suggests earlier than previously discovered "heads" of which could be used to be a tip of javelins, or "arrows"

I wrote a thread not so long ago here www.abovetopsecret.com... on the "atlatl" which will not predate the spear but most definitely came afterwards as it suggests an understanding of not only advanced tool working technology (harder tips, bi facial sharpening etc) but of physics (longer arm = increased power = greater distance ).

I would be honored if you had a read.


Now to really make your head spin. Consider the days where people thought the Earth was flat. (A totally overused reference on these boards usually directed at misinterpretation the evolution of science).

This actually came long after ancient Greek times where people knew the Earth to be round.

So in essence, you could have had a very happy tribe(?) of humanoids wandering around killing animals left and right with their spears, and then one idiot one came by and created a cult saying that spears are the work of the devil, because his son accidentally stabbed himself in the eye with one. (Krog wasn't a bright boy.)

Okay, maybe I'm pushing it but you get the general idea.


All you needed was one guy, in a moment of creativity, cutting himself on a sharp stone and thinking "Hmmmmmmmm....I wonder....???" and putting two and two together to make a rock knife.


Knapping stone points is a lot more complex than that.

Ever try it? Even with opposable thumbs its tough.

I've never tried it, and it does look hard (I've got a pretty good collection of points), yet it just takes one genius with that part of his brain that "knows" how to knock one stone on another in such a way to make a stable sharp projectile/cutting tool to become hyper-activated. Then, seeing the woman he likes watching him and maybe laughing at his feeble attempts, he kept at it, worked at the thing hundreds of times, and finally learned how to do it semi-well. When he did that a bigger guy came along and demand that he show him how to do it. Women would watch, and then they'd make better stone tools than the men, and laugh among themselves at the guys showing off. The game is as old as rock. Someone better than me at making points came along, I've no doubt of it, not long after the first semi-ape men were finding things in the fields which focused their minds on a need, or an idea, and soon the task was underway.

And you don't need opposable thumbs to do anything. I went without using my thumbs for over two years (put up a thread about it) and still don't use them to type or do lots of other things. Started out as guitar practice after hurting one of my thumbs, and then the experience evolved in directions I never suspected.

posted on Nov, 28 2013 @ 08:10 PM
link
I think it really raises questions about the sketchy dating methods which are widely used around the world.

Consider the days where people thought the Earth was flat. (A totally overused reference on these boards usually directed at misinterpretation the evolution of science).

This actually came long after ancient Greek times where people knew the Earth to be round.

I use that reference a lot here. Its the official line, not what ordinary people thought.

You could think what you want just don't tell the Church/Rulers else they'd burn you for Heresy.


That’s nothing one day these guys will rule the earth. lol

The oldest known stone-tipped projectiles have been discovered in Ethiopia. The javelins are roughly 280,000 years old and predate the earliest known fossils of our species, Homo sapiens, by about 80,000 years.


The title of this thread is misleading. Hominims made stone tipped spears 500,000 years ago... What is curios about the discoveries and others recently is that they are projectile type weapons, and not just thrusting.
edit on 55pm55qupm302013-11-28T21:51:55-06:000909 by SasquatchHunter because: (no reason given)


Well I will say this I don't know what your credentials are or if you have any in that field to where anyone should hold your opinion in any esteem but for right now at least the dating methods they are using are accepted science. I am sure those in that field of study the world over are currently contemplating the implications of this find and adjusting their models to reflect. If one day science comes up with a better way of dating such artifacts I would hope they are re-examined but until then this is an amazing find worthy of the textbooks.


Sorry if the title seemed to mislead but it is the one in the article however I did clarify in the OP in hopes it would not cause too much confusion. You are correct about the discovery of them being projectile weapons.

for right now at least the dating methods they are using are accepted science.


I have to admit you are right with that, but I think my post, which I stated as an opinion, is still legit.
I mean there is some logic in what I'm saying, even if I'm not used to that science!

Your argument is pointless, because the dating wasnt done the way you suggest.
Two. A mere two clicks will get you to the original journal article where the actual dating methods used are revealed.

edit on pmThursdayfpm1 by alfa1 because: (no reason given)