With species now vanishing at 1,000 times the rate they did before humans became the big threat to life on Earth, scientists and philosophers from around the world met this month at Laurentian University in Sudbury, Ont., to discuss the best way to combat what amounts to the sixth great extinction event in the planet’s history.

Although uncomfortable with the notion that conserving endangered species now amounts to an exercise in “triage,” most of those at the conference agreed that some priorities are required, given all the time, energy and money being directed toward conservation. The issue now is how to set those priorities.

To that end, Arne Mooers, a biologist at Simon Fraser University, presented a paper called “Are some species more equal than others?” The title was purposely Orwellian because Prof. Mooers argues that evolutionary isolation – as determined by a measure called phylogenetic diversity – may be the best way to assess the value of a species. The Globe and Mail talked to him about why.

Is applying phylogenetic diversity to conservation a new idea?

Not entirely. In 1982, the celebrated biologist E.O. Wilson stated that the aim of conservation should be to preserve all the information contained in all the DNA of all species currently alive on Earth. But the notion now is a practical one – to preserve those species that carry the most information on evolutionary history in their DNA.

How would it work?

Biologists use diagrammatic trees to depict relatedness between species and groups of species based on divergences from common ancestors. Sometimes it’s the branching pattern that’s of interest – who’s related to whom – but increasingly we pair fossil information with DNA-sequence data to understand timing and rates of divergence; in effect, the length of these branches.

Phylogenetic diversity is the total amount of independent evolution represented by adding branch lengths for a set of species. For all 9,993 species of living birds, for example, that’s about 77 billion years’ worth of information; for the 575 of these currently at risk of extinction, it’s about 2.7 billion years. The next step is deciding what that means from a conservation standpoint.The Globe


Every day I read something about a species in danger or one that just went extinct. With the climate changing it is inevitable that this will become more common. The research being done in cloning and the push to preserve these animals DNA to one day be resurrected will not only be important in preserving the diversity of life but it may also be key to our own survival.

I am not talking about cloning humans but I am talking about the medical discoveries in nature. For example the research into cancer we have long known sharks have a natural defense to cancer and learning how that works may lead to treatment for ourselves the medical field is already using equipment that mimics their scales because bacteria does not grow well on it. They are studying whale’s ability to produce myoglobin because it provides extra oxygen muscles which may lead to new treatments in humans. The list goes on and on. If we lose the animals we also lose much more.

Personally I think it is too late to prevent the coming extinctions now we are faced with a triage scenario. 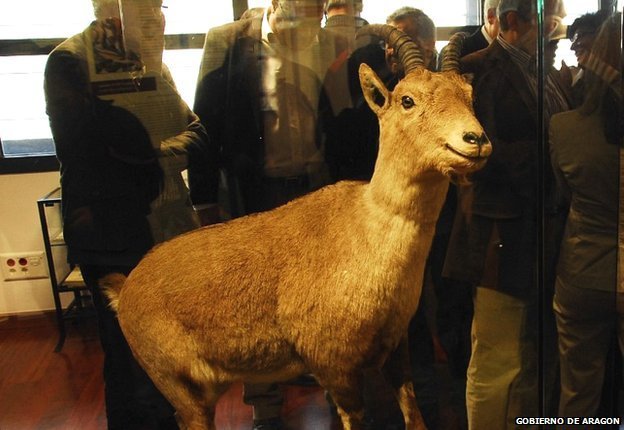 The bucardo became extinct in 2000, but cells from the last animal were frozen in liquid nitrogen.
In 2003, a cloned calf was brought to term but died a few minutes after birth.

Now, the scientists will test the viability of the female bucardo's 14-year-old preserved cells.

The bucardo, or Pyrenean ibex, calf born through cloning was an historic event: the first "de-extinction", in which a lost species or sub-species was resurrected.

The Aragon Hunting Federation signed an agreement with the Centre for Research and Food Technology of Aragon (CITA) in Zaragoza to begin preliminary work on the cells from the last animal, named Celia.

One of the scientists behind the cloning effort, Dr Alberto Fernandez-Arias, told BBC News: "At this moment, we are not initiating a 'bucardo recovery plan', we only want to know if Celia's cells are still alive after having been maintained frozen during 14 years in liquid nitrogen."

In addition to this in vitro work, they will also attempt to clone embryos and implant them in female goats.
bbc


I'm not sure how I feel about this. I never thought cloning was a good idea, on the other hand the way we are going through species isn't good either.


Personally I am not against cloning I find it fascinating I do think there is a lot more research that needs to be done on it. I think we can both agree that climate change is a problem and extinctions are going to happen and are happening Darwin’s frog was just reported as extinct. Cloning is probably the only answer available to us to save these species other than a global initiative against manmade global warming but there are still too many people in denial.
edit on 26-11-2013 by Grimpachi because: (no reason given)


Yeah absolutely, the rate of extinction is only going to increase. The more spiritual side of myself can't quite be 100% resolved with it though...