How many times can a chemtrail believer be wrong??

posted on Nov, 17 2013 @ 05:04 PM
link
Global Skywatch has published something that I am sure they think is the definitive Truth about Contrails, but the truth about this is that it serves only as an illustration of how many "facts" can someone get wrong in a short bit of writing!

Every Condition is Wrong for Contrail Formation

there is no such thing as "high vacuum" - perhaps he means "low pressure"? And of course that is wrong- contrails will form at sea level if the humidity and temperature are suitable - hence "ice fog" in Alaska!

cold temperatures, and high humidity, however, the output side of a jet engine contains mostly outside air that has been pushed through the engine by the large ducted fan (The ducted fan is the set of spinning blades that you see when you look at the front of the engine). This high-pressure at the output of the engine is contrary for the formation of condensation trails because pressurized air has the ability to hold much more water in suspension, without condensation.

Actually this is more-or-less correct - albeit in a pidgin-technical manner - denser air such as that compressed by a turbo fan will hold more moisture. As long as it remains denser of course....which isn't very long once it leaves the engine!

A fraction of the air that enters the engine is taken in by the turbine engine. This air is mixed with jet fuel (essentially kerosene), combusted, and then exits the engine under very high pressure and high temperature. Condensation formation requires a decrease in ambient air pressure to form, but the output of the turbine is under very high pressure which prohibits the formation of condensation trails.

lol - and that is why the contrails do not form at the output of the turbine, and why they form some distance behind - when the pressure is rapidly reducing - thus also rapidly reducing the temperature!

Furthermore, the ratio of air-to-fuel used in turbofan engines is as high as possible (lots of air but relatively little fuel) so as to keep engines efficient and cost-effective, and this lack of fuel in this ratio results in a lack of water vapor; yet another reason jet turbofans cannot produce condensation trails.

There is no lack of fuel "in this ratio" - all jet engines seek a "perfect" mixture, which IIRC is about 14:1 air to fuel - some get closer than others, but there is always fuel!!

In short, the more efficient the engine, the less fuel it uses per unit of air moved, and this renders turbofans incapable of producing condensation trails, unless they use water injection (see section below).

Using less fuel does not render them "incapable" even by his own reasoning - it should render them less LIKELY by simplistic reasoning - however other considerations actually make it MORE likely- put simply the higher the efficiency of the engine, the higher the temperature at which contrails can form, and so the more likely they are to do so - the math is in the link if you want to examine it closely.

Simply said, every condition necessary for contrail formation is absent in a high-bypass turbofan engine.

simply said this guy is ignorant, or a liar - ignorant if he actually believes this rubbish and has not been told otherwise, or a liar if he has.

If you go to an airport and watch jets take off, you will see that they emit a faint trail of black soot, which is typical of burnt jet fuel (kerosene), but you will not see water vapor.

WATER VAPOR IS INVISIBLE - YOU NEVER SEE IT!!

Sorry for shouting, but the level of ignorance or disinfo in just this short piece is appalling!

Here is my 5 cents on the whole chemtrail thing;

I believe that 99.9% of plane trails are simply jet engine exhaust clouds. When a plane is at high enough altitude or other situations when the ambient temperature is low enough, the exhaust gasses crystalise. If you have ever flown in a jet and turned on the flight path monitor, you will notice it can be as cold as -30 degrees celcius outside the plane and therefore anything that the jet engine heats up i.e water and unburnt jetfuel will very quickly crsyalise once it hits the outside air again

As I have mentioned before, I live in a flight path (an approach path to our city's airport) About 30 planes a day fly over my house at low altitude and I have never ever seen any form of vapour trail behind them

I do however see flights that are at cruising altitudes leaving behind jet trails, which is where the air is cold enough to cause this to happen.

I do believe that in extremely rare i.e experimental cases planes have been used to drop things like aluminium chaff and other material in experiments on radar blocking, missile deflection, cloud seeding etc etc. There are aslo other cases where commercial (not passenger) planes are used to spray pesticides etc for very publicised purposes i.e mosquito eradication etc.

However, the notion that passenger jetliners are out there spraying toxins in the air as part of some covert secret society depopulation agenda or other conspiracy theories is just ludicrous.


OK, so let's get the 'Chemtrail' faith correct;
1. Pilots in large numbers make regular series of flights dumping x amount of Toxin over selected zones.
2. Pilots then land, drive home and sit back relaxed awaiting the arrival of such pre-dumped Toxin to flood their house / flat.
3. No Toxin arrival, so next day pilots give it another swing.

And I thought such sky filling trails, seen for about 50 years as I look up, were simply iced / cooled. plane exhaust clouds......Silly me eh ?

PS Nice to read your Sensible facts, thank you

posted on Nov, 18 2013 @ 02:39 AM
link
Nobody jumping in to defend Russ then? Doesn't look very good for him, can anything from him be consigned to the hoax bin in future then?


Using less fuel does not render them "incapable" even by his own reasoning - it should render them less LIKELY by simplistic reasoning - however other considerations actually make it MORE likely- put simply the higher the efficiency of the engine, the higher the temperature at which contrails can form, and so the more likely they are to do so - the math is in the link if you want to examine it closely.

I just realised I hadn't linked to the paper I mentioned here - so here it is - it is a PDF download.

FYI it is the study from which this photo comes: 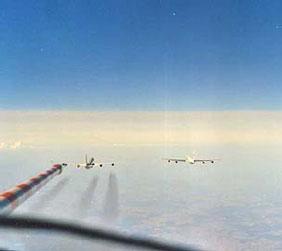 
Here is what just shows how well thought out this was...

Now being someone that knows better does this just not make you smile when reading it?

Nobody jumping in to defend Russ then? Doesn't look very good for him, can anything from him be consigned to the hoax bin in future then?

I think your going to be hard pressed to actually find someone who will, but I will almost guarantee at least one will have a go at it.
edit on 18-11-2013 by tsurfer2000h because: (no reason given)


Kudos for you Aloysius...finally, after all these years of fierce debate you finally came to the conclusion that chemtrails are real...(ha,ha..I am so happy now)

posted on Nov, 18 2013 @ 02:05 PM
link
So now not only do chemtrails exist but contrails don't actually exist? These chemtrail believers just get crazier and crazier.

AndyMayhew
"How many times can a chemtrail believer be wrong??"


The chemtrail believers are easily startled, but they will soon be back, and in greater numbers to declare this disinfo..


They should really come down heavily on the nonsense that the likes of Russ come out with as it only hurts the cause, but where do they draw the line? They might have to start questioning all the sources of chemtrail information and who knows where that might lead!

posted on Nov, 19 2013 @ 07:15 AM
link
I actually saw a video once where a "chemtrail" believer stated that if you spray vinegar around your house and stuff it makes chemtrails over your house disappear. *facepalm*

I mean... I was all like "how does spraying vinegar at ground level make water vapor hundreds of feet in the air disappear?" And I facepalmed again.

Here's a video for reference, but enter "Chemtrails vinegar," in the youtube search engine and you'll see how popular the idea is.

note this was uploaded before the previous one...I wonder if there is a link there and this meme actually started with a debunker??