End of the week time again

I am not on here much at the moment so with 10 minutes to spare before i shut up shop for the weekend I thought I would share this one with you all.

As a funeral director, i take every chance i get to tie the shoelaces together of the deceased...

Because if there ever was a zombie apocalypse, it would be hilarious!

After watching a few zombie films I've come to the conclusion that I would be a cameraman in the event of a zombie-apocalypse.

They never seem to attack them.

And last but not least :

I've always wondered what it would be like to star in my own zombie movie, so I went down to my local old peoples home, stole all the wheel chairs and walking aids, then set the fire alarm off and waited outside with a shovel and a cricket bat.

Lets hear your conspiracy, zombie, alien or whatever related jokes...

I'm sick of kids coming to my house on the 31st of October every year!

I don't get it... so next year I'm going to decorate my yard with spiders and skeletons, turn all the lights off and dress up as a zombie with a fake chainsaw to scare the little buggers away.

posted on Nov, 15 2013 @ 10:24 AM
link
You are obviously a very very sick man.
I respect that
I plan on spending the zombie apocalypse with this guy here. 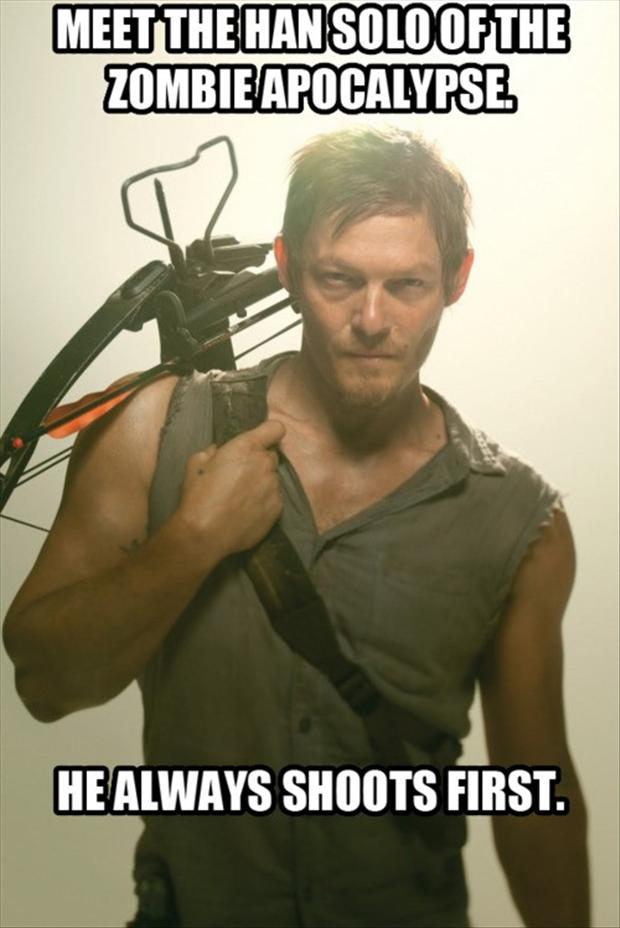 Neysa
You are obviously a very very sick man.

Yes, how did you guess, i have a cold at the moment

I will join up with you guys if you don't mind... I am quite handy with a crowbar.... BUT purleeeeze do not ask me those famous 3 questions?


BUT purleeeeze do not ask me those famous 3 questions?


You lost me there. Which 3 questions am I not supposed to ask?
Oh crap! That's not one of them is it?


The only thing I'm doing to prepare for the zombie apocalypse is to polish my rolling pin and restring my slingshot to defend my loved ones. The zombies wont bother me- if I dont get my morning coffee they will just assume I'm one of them!


if I dont get my morning coffee they will just assume I'm one of them!


That would be more than enough to scare them off my dear!