What has America come to? This takes "dumbing down" and "dumb & dumber" to a whole new level.

You would think that officials involved would somehow claim this is footage of the drill (3 weeks prior) after being exposed- but no, they can't do that because that would implicate premeditation of the whole event.

So, they're sticking to the story, debunking claims of there being a dummy in the wheelchair and insisting a pale, lifeless human being is the dummy, not a dummy. Hmmm, to me it begs the question of what can't they get away with, at this point?! 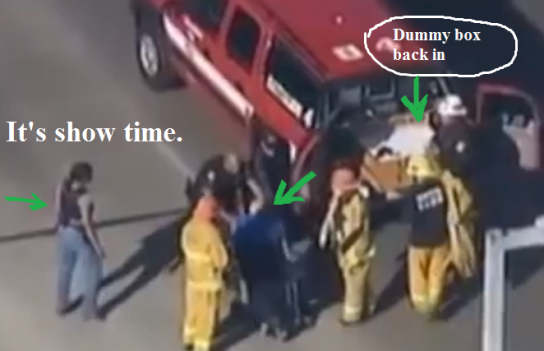 Maybe the TV feeds were actually using footage from prior drills ?

posted on Nov, 4 2013 @ 10:25 PM
link
It's wearing the same clothes the shooter is alleged to have been wearing, and its size is exaggerated to approximate his size as well

^Presented as THE wounded LAX Shooter himself. That would mean they were drilling with the likeness of a shooter in TSA-like garb then it happened supposedly in real like 3 weeks later. Either way, it implicates staging of the event
edit on 4-11-2013 by gardener because: (no reason given)

Maybe they have prior drills so they will have footage?

it's just pissing me off with the amount of pathetic stupid on here.. god damn it.

there is a dummy alright... recently joined.