posted on Nov, 1 2013 @ 04:25 PM
link
The famous Hessdalen Lights maybe known to many here on ATS, but if you've never heard of them check this documentary:


I occasionally visit the Project Hessdalen website and check their live stream cams. This evening I had a quick peek. I took these sceenshots where you can see a light circled in yellow. The light was moving from right to left, the camera is pointing NW, this would mean the object is traveling in roughly a SW direction. The light disappeared twice while I watched it, you can see the time stamps on the pictures to see how long it took to move from picture 1 to picture 3. Almost immediately after the third picture it vanished. It's hard to tell from the grainy image but I could discern no blinking lights on the object, it just appeared as a single light. I then went to Flightradar24.com to see if I could track any commercial aircraft in the area. I have circled the general area of the Hessdalen valley as best as I could. You can see that the only aircraft on there that could have been in the cameras view is flying in the opposite direction to the 'object'. The object appears to be beneath the cloud ceiling, although that it disappeared twice may mean that it passed through some clouds. Also, while my visits to the view the streaming cam are infrequent I have never seen a light in the sky whilst viewing the stream before. 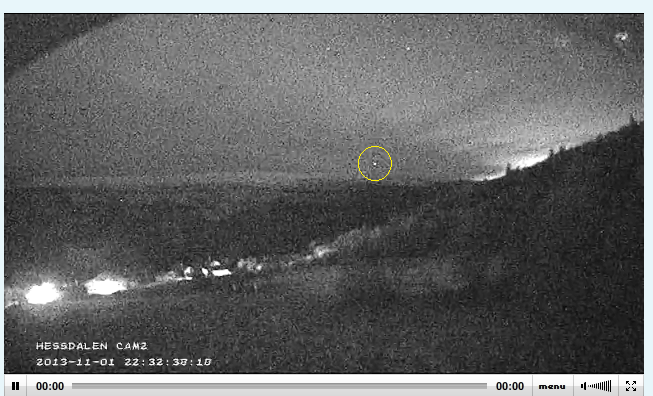 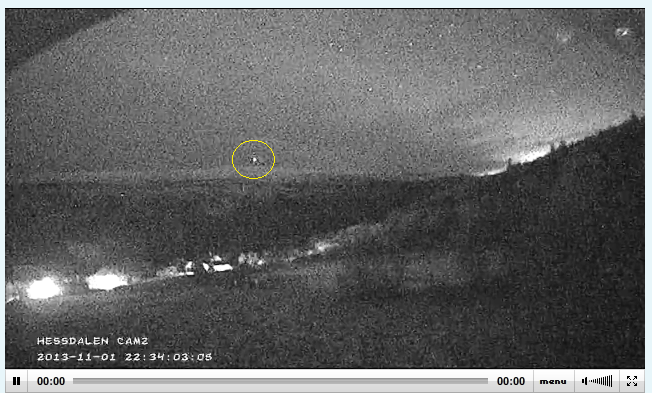 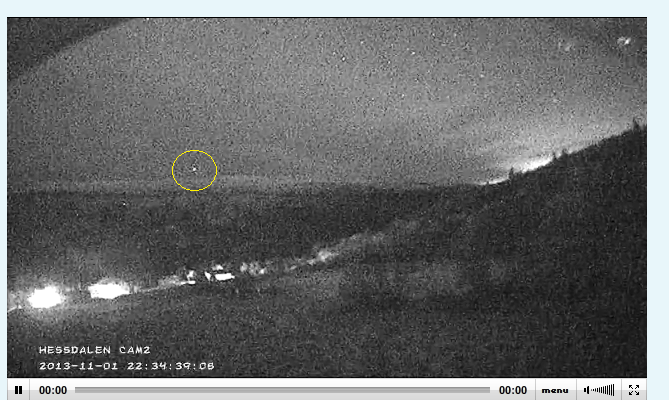 So, was I lucky enough to witness the Hessdalen Lights(well, not in person) or was it a small aircraft or something else??

posted on Nov, 1 2013 @ 04:34 PM
link
Hard to tell what's going on there. I looked at the stream for about a minute and also saw a spot of light on the right of the screen that seemed to disappear behind the hillside. Didn't look like a car or anything. Who knows?

Yes, this is good as ongoing phenomena, and the scientist would like to get a grip on it/them, as it seems there is more than one effect. One of the observations does look like a fireball of some kind, but even if it was, it doesn't take away from the rest.

As a budding scientist (well I'm an astronomy/astrophysics/cosmology student) I was drawn to the Hessdalen phenomena and Project Hessdalen early on when I started researching the UFO subject.

It is exactly this kind of long term, SCIENCE based monitoring of the phenomena in a hotspot location that MUFON (I know, stop laughing) should be doing, rather than just collecting lights in the sky reports.

There are several places like Hessdalen in the US but unfortunately most of the UFO crowd seems more interested in UFOs as entertainment and will fork over crazy amounts of money to hear the same or similar stories told in "UFO symposia" that amount to large campfire story telling sessions than to actually fund real scientific research into the phenomena.

The reasoning baffles me because many also seem to cry out for "disclosure" or to be "taken seriously by science".

That has to start by doing research along the lines of Project Hessdalen not simply collecting anaecdotes (no matter how juicy they may be). Real research is boring but a lot more productive long-term.
edit on 1-11-2013 by JadeStar because: (no reason given)


Here is a longer version of the documentary: