posted on Oct, 22 2013 @ 03:14 PM
link
This is completely outrages in my honest opinion! What are they trying to become, as soon as America see's this they will be putting these on every damn last homeland security and every police officer in town! I really do think it probably is all about being intimidating not even for their own protection!

The Australian police are currently trying to fight and get semi automatic assault files for police this is so pathetic. 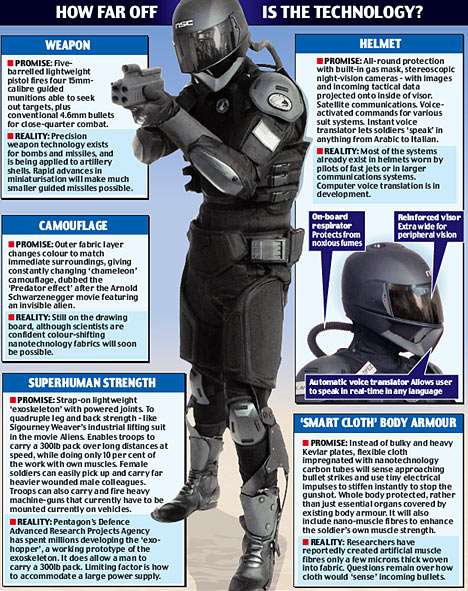 
It is so scary to believe that they probably already have things like them made! I would not be surprised at all!

Biigs
That is really disturbing.

Really sucks that last bit of humanization from a soldier, it may as well be a machine under there and from some perspective that may be already the case.

EDIT: i wonder what the people think who have to wear it? They dont even know the person next to them!
Must be pretty weird.
edit on 22-10-2013 by Biigs because: (no reason given)


Besides the obvious for protection. Here is what I think:

thisguyrighthere
Reminds me of these idiots from Bolivia: 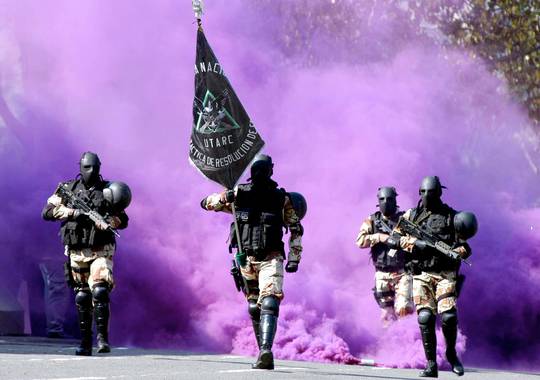 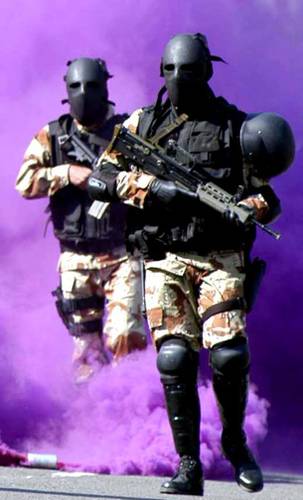 Disbanded after drawing down on reporters filming them botching an arrest.


That rifle is the British army SA80, I've fired them (and their LSW counterpart) on many occasion.....who are the guys in the picture????

posted on Oct, 22 2013 @ 08:25 PM
link
They should just make it completely cover the head, then call it a knight's helmet. At least that way it would absorb more of the force if they got hit in the face with a baseball bat (or the back of the head, for that matter).

EDIT: I mean, come on, is that the best they could come up with? Budget cuts, or what?


Pretty cool for front line army but not any form of homeland agency or alphabet group. The bottom part of the face mask or helmet will direct any shrapnel right into the face with the way its angled. Bad design but great idea for us.

Make the armies go back to swords and shields, then these masks make sense .

Actually, I can see why they'd wear them, but it's not very functional. Seems like it would cut your peripheral vision by quite a bit.


It still looks intimidating as hell though


Biigs
That is really disturbing.

Really sucks that last bit of humanization from a soldier, it may as well be a machine under there and from some perspective that may be already the case.

EDIT: i wonder what the people think who have to wear it? They dont even know the person next to them!
Must be pretty weird.
edit on 22-10-2013 by Biigs because: (no reason given)

At least they would have the visor flipped up when not creeping around slowly and noisily.

posted on Oct, 23 2013 @ 03:29 AM
link
Wow talk about scary.
And halloweens around the corner too.
Wonder why they'd suddenly switch to these?


They're ballistic masks. They do a lot more for you when combined with a helmet than just a helmet. (Well, maybe not towards a bullet round, but things like shrapnel it'll help plenty.) Some police forces also tend to use them. Never seen them used in the U.S. though.

But overall, I think this is more intimidation tactics than for actual safety.

posted on Oct, 23 2013 @ 04:12 AM
link
One can just see how this is going to go. Sometime in the future when we have a G whatever number meeting or Bildenburg or some other obnoxious group of greedies holding a top meeting and us normal folk, decide to protest about the control some of those unelected and so-called elected lot exert, we will all look like something out of star wars.

Currently how do you identify who is behind the mask. I can see this on the streets of London and with our cops who obviously think the public have no rights to protest whatsoever and now, MI5 or the cops themselves have the reputation of working undercover to start trouble, we will be like lambs to the slaughter unless we armour up to match. Once we all mask up, I suspect with the amount of cyber fight games absorbed over the years will certainly influence the outcome and the rest of the world will hear the bangs, wallops, crashes and yells as the Brits get down to serious protest.


The guy walking behind appears to be carrying something based on the M4 platform, so it's probable that the unit for which these fellows work does not have a single unified acquisitions policy regarding the way it's members are equipped.

Wrabbit2000
I suppose the concept of hyperventilation never crossed anyone's mind? Those look like quite a sight when the men are lined up on parade or for a demo photo.

I wonder what they look like after hours of vigorous action in the field and breathing into a solid barrier?


Dont look only at the mask. Look at the whole gear. These people are rather obviously equipped for entry missions. In fact, I wouldnt even be sure if they are soldiers at all, or at least a paramilitary LEO force.

In an actual assault on, say, a hostage situation, or a very localized entrenched foe, the action usually is over in seconds to minutes. This kit is obviously not suited for prolonged stress, but that is not likely to be its purpose.

I also saw where they noted it's bullet resistant to a .44 magnum at close range. Ooookay. I have another question then and it's a doozy........

Lets say you put this mask on a physical representation of a person, like Buster in Mythbusters. Then, fired a full cylinder of .44 into the mask? Is what is left behind the mask, in real life, going to appreciate having survived it ..if they do survive it ...or would they have honestly been happier with the lights just winking out on the unlucky hit to the head, like mere mortals?


A bullet is actually a very small thing, even in higher calibers. The only reason it works is because it concentrates all its energy on a very small tip. Dont forget that, in absense of a recoil reduction method, the shooter of a gun actually has to absorb a higher energy than the recipient of the bullet, and they do that just fine.

Now, lets assume the face mask is durable enough not to shatter on impact by a handgun caliber bullet. What happens is that the mask will actually "receive" all the energy from the small bullet and will spread it to a much much larger contact area on durable parts of the skull (Cranium, eyebrow area, cheeks, jaw... who knows where the contact points are). Dont forget that the skull is actually an extremely durable protective shell for the brain; the same goes for the neck and spine which are tough to break as well.

Also, the momentum of the bullet will be braked down from a high-speed, low mass impulse to a low speed, high mass impulse. The human body is generally better suited to absorb the latter. Lastly, the mask itself might dissipate some energy through crumbling.

Now, its certainly not going to be pleasant to be hit in the face by any kind of projectile. But there is nothing at all that contradicts the THEORETICAL validity of such a face armor. It does nothing different than a SAPI aror plate, and those are rated for up to high-caliber armor piercing rifle rounds. Even a .44 is small pickings compared to those dimensions.

EDIT: i wonder what the people think who have to wear it? They dont even know the person next to them! Must be pretty weird. ...


Someone already mentioned the ubiquity of full head armor through history. Another thing would be that special forces have been knwon to wear full head cloth covers for decades.
edit on 27/10/2013 by Lonestar24 because: (no reason given)

The helmet stopped the round, but he nearly didn't survive the injuries from slamming face first into the ground afterward.

I don't think someone wearing one of these would fare well either, never mind skull injuries, the neck injury would probably nearly kill you.