Snooty Scientific, Economic and Philosophic Jokes to Lighten the Atmosphere

posted on Oct, 5 2013 @ 12:19 PM
link
This is a pretty good list of snooty jokes, for the sake of brevity and to avoid simply posting the whole list, here are some: 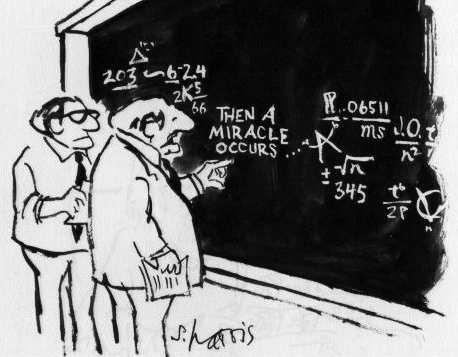 "I think you should be more explicit here in step 2."

50 People On ‘The Most Intellectual Joke I Know’

It’s hard to explain puns to kleptomaniacs because they always take things literally.

Boris Spassky was once asked by a reporter, “Which do you prefer: chess or sex?”. Spassky replied “It very much depends on the position”.

“is it solipsistic in here, or is it just me?”

I’d tell you a UDP joke, but you may not get it.

I prefer IP jokes; it’s all in the delivery.

I could tell you a joke about TCP, but I’d have to keep repeating it until you got it.

Two fermions walk into a bar. The first says “I’d like a vodka martini with a twist.” The second says “Dammit, that’s what I wanted!”

Entropy isn’t what it used to be.

Did you hear about the suicidal homeopath? He took 1/50th of the recommended dose.

there are two types of people in the world: Those who can extrapolate from incomplete data sets

The programmer’s wife tells him: “Run to the store and pick up a loaf of bread. If they have eggs, get a dozen.” The programmer comes home with 12 loaves of bread.

Your mother is so classless, she could be a marxist utopia

An engineer, a chemist, and an economist are marooned on a desert island. They start to brainstorm a way off the island. The engineer says, “we can lash together some branches and make a crude raft and try to make our way back to land somehow.” The chemist says, “with the right materials we could build a really smokey fire and try to signal a plane.” The economist says, “okay let’s assume we have a boat…”

Helium walks into a bar and orders a beer, the bartender says, “Sorry, we don’t serve noble gases here.” He doesn’t react.

A Buddhist monk approaches a hotdog stand and says “make me one with everything”.

What do you get when you cross a joke with a rhetorical question?

The programmer’s wife tells him: “Run to the store and pick up a loaf of bread. If they have eggs, get a dozen.” The programmer comes home with 12 loaves of bread.

Oh..I'm laughing my tail off... On that one? Which is worse? That it's funny or that it makes perfect sense to me?

Thanks for a very nice diversion on the whole thing!

A Buddhist monk approaches a hotdog stand and says “make me one with everything”.


And here is how to NOT tell that joke...

'Went to a party last night and two atoms collided. It was a blast!'

Freud and Jung were having a chat,
Jung says to Freud "So how is your mother?"
Freud replies "Well I can't tell you about that can I..."

'Is it insomnia or amnesia... I've been losing sleep trying to remember'