Last night a Soyuz rocket carrying three members of the Expedition 37 crew blasted off from the Baikonur Cosmodrome in Kazakhstan headed for the International Space Station. Instead of dallying in orbit, the crew took the fast lane to the station, docking fewer than 6 hours later.

I thought you’d enjoy the video. The quality’s great and you get to hear the audio too as the craft lines up and docks with the station. Funny how the Soyuz looks like an old propeller plane. Just a happenstance of angle (the wing-like solar arrays are edge-on to the camera) and shapes.

Flames, like this one pictured here, burn more perfectly in microgravity, helping researchers get a better understanding of the nature of combustion in space and on Earth.
Credit: NASA 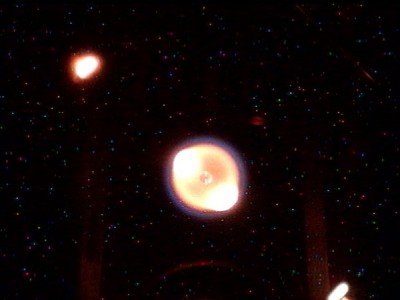 After docking at the Poisk mini-research module, crew members Oleg Kotov, Mike Hopkins and Sergey Ryazanskiy were welcomed aboard shortly before midnight. The crew will study human physiology and health including how the body changes shape in microgravity as well as the effects of weightlessness on the immune system.

Science is happening all the time on the ISS. Last week the crew examined everything from combustion and fire suppression in space to studying how metallic crystals transition from liquid to solid when creating alloys.