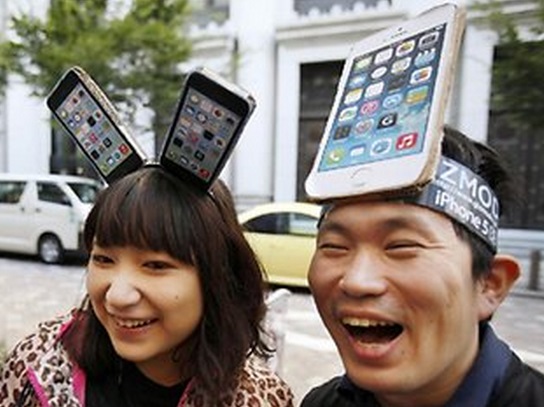 WHO are these morons?
Seriously, who the hell are these dopes lined up halfway to hell waiting to buy some piece of iCrap which does exactly the same stuff as their old piece of iTrash, only in a newer and vaguely shinier way?
What the hell has happened to humanity? It's a beautiful spring day outside. People could go to the beach before work or, y'know, just go for a nice healthy walk or something.
But nooooo. It's like, let's all stand around like sheep and buy some absolutely useless piece of iDrivel for five hundred bucks because there's absolutely no better thing in the world to spend your hard-earned cash on. 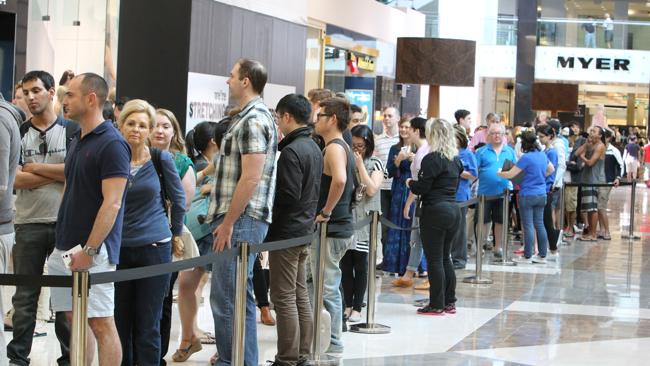 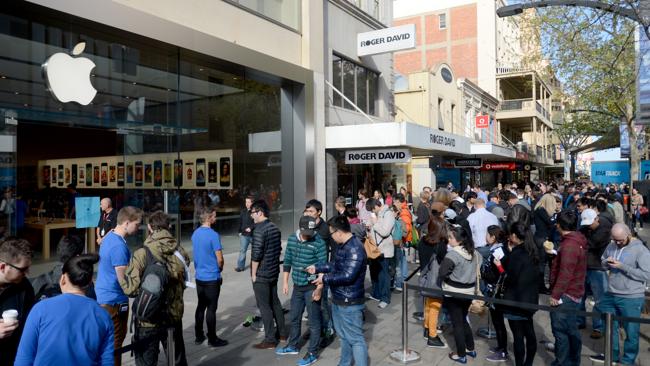 Oh, but it's a got a new wackadoo doo-dat blip-blap thingy, so it must be awesome. Gimme a break. Actually give me about 206 breaks. That's every bone in the body. Maybe then I won't be able to feel the pain of a world where people's only concern is accumulating more and more useless bloody i#e.
Let me share a little story with you. Back in 2006 when working for a sporting magazine, I attended a thing in New York City where Apple and Nike launched some whizzbang shoe/running data techno-whatsie system.
It was all very exciting. The Nike guy said he didn't really understand the technology behind the new system whereby runners could monitor their every step on their computer after their run. But hey, he sure knew a guy who did.
In walked Steve Jobs in his trademark jeans and skivvy. He was tall. He said some stuff. He was an impressive enough guy, I guess. I had never heard of him until that day. But hey, he knew how to work a room.
There's this whole mythology around Steve Jobs that pretty much says he changed the world. Steve Jobs didn't change the world. He blended good design and made a bunch of great products - as well as a bunch of so-so creations like the shoe-techno blah blah thingy he launched that day.
What Steve Jobs did change is the WAY we consume things. He made stuff easier to consume. To be fair, he probably saved innumerable trees and loads of gooey chemical crap that makes CDs and stuff. Heck, he's probably done more for the environment than Steve Irwin.
Then again, maybe not. Because Steve Jobs, wittingly or unwittingly, made rampant consumerism fashionable again. There's a buzz around this new iThing not because it does something new and radical and fabulously wonderful but because it's there. Simple as that. 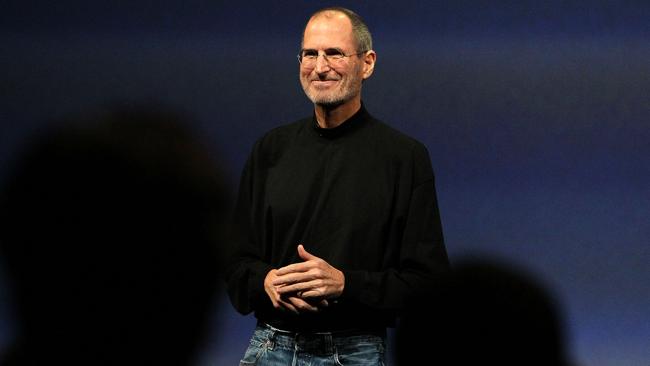 
Believe it or not, this piece isn't about being hoity-toity and holier-than-thou. I am not better than you. I am wearing Diesel shoes and Mavi jeans today. I am the same level of product slave that you are.
Almost.
The one bunch of doofuses (doofii?) I do feel superior to today is the throng who queued up to get their iFix this morning. These people call themselves Apple fans but they're actually suckers, plain and simple. They think if they get something first they'll be better and awesomer and hipper and connecteder and whateverer.
Like I say, they should go for a walk. Either that or buy a book. An actual book made of paper that they can hold in their hands. They should savour that book, revel in its sheer tactile bookiness, enjoy the object for its appearance as much for what lies within.
Steve Jobs himself would have approved of that.


Couldn't care less about apple or their products, I don't them love or hate them. They are an irrelevant product to me personally. I can see buying an iPhone or Mac if you need one but sure won't waste time standing in line for one.

These people have a mental problem called consumerism. It should be added to the DSM V under the "shop till you drop" chapter. Probably under OCD.

posted on Sep, 20 2013 @ 12:02 AM
link
I know where all the "get the newest thingy" started. With US. We were in Silicon Valley in the formative years, before Apple had anything personal, before Apple even existed.

Back then the only computer screen was monochromatic green or amber. You could switch it back and forth, blink amber, blink green (WoW). It was awesome. There was this board in the machine, it was called a "Graphics Adapter".

Then they came out with a newer version. It was color. The new board was a Color Graphics Adapter (CGA). Everyone had to have one on their desk. It was weird. Not that their was any reason to have color because all you could see was type. But there it was. Don't be left behind.

Then the VGA, it was "Very Enhanced". Mindless appreciation ensued.

I quit the industry when it became the race for the "Super". The Super Very Enhanced Graphics Adapter or (SVGA).

By this time i had become convinced that every new whiz bang was going to flood the market with its brief glory before fading to obsoletism along with every other computer enhanced version of happiness.

I knew it all back then. Nowadays I watch that train roll by every day and I laugh and laugh...

cheesy
do you agree with him? why?

It's hard to do either because of his utter cluelessness.

He's lashing out at a cultural phenomenon out of sheer curmudgeoniness, lots of people have fun hating on Apple doing that.

The reality is that a MASSIVE economy has been created -- out of nothing -- because of the original innovation represented by the iPhone and iPad. Tens-of-thousands of people have well-paying jobs that did not previously exist because of smart phones and tablets. If you extend that out to the ecosystem of service companies and infrastructure employees that are necessary because of the huge number of tech and creative people employed because of smart phones and tablets, the number is firmly into six digits... if not more.

So fine. Wait in line. I'll bring them coffee if necessary.


That's the point. And it's an important one.

Hufff..when i klick MyAts..i see your name in my Post..and wonder if my thread was removed..hehe
Tq Mr. for Coment on my post..so you dont agree with him..

"icrap", really? That is so boring, it makes a whole posting irrelevant.


As I sit here typing my reply to your thread on an iPad, it occurs to me that there is a certain hypocrisy in what I am about to say...

That is, to a certain degree I agree with some of what the writer of the article said. The cultural phenomenon of the iPhone, iPad, iPod and so on, is aggravating. I met a chick once who had a bloody apple logo tattoo... I mean come ON! Really? Did you even charge them for the adspace?

However, his reason to dislike the culture is much more about him than it is about the products themselves, the marketing methods used to sell them, and all the rest of it. He's a whiny git, with a whole plate of chips on his shoulder, and needed to rage. That's all.

The only problem I have with apple products is that they are are:
A) Supposed to be super mobile, and yet are so easily damaged.
B) Expensive to repair and replace.
C) Media that you want to put on them has to be put through iTunes , or one of several online radio stations and play list sites.
D) And this is the biggy...this is the cream of the crop, but applies to all smartphones, tablets, microcomputers, hand held gadgets of all types. When you spend four pounds traveling to a friends house, never mind walking through a snowstorm for forty five minutes because buses are shut down and taxis are charging double or triple tariff, the last thing you want is for your mates to be sat there on their gadgets, on bloody Facebook, talking to people they have have never met, while ignoring someone who is in the room with them, and has invested time and money in what ever relationship one might have with them....

Now, one cannot blame Apple for that, but you must admit, if you are familiar with the scenario I am describing in even the merest way, that this sort of thing is RIFE amongst iGadget users.

Perhaps people who have this habit are just far too interested in what other people think about certain things? Maybe the reason that I will never do that to anyone is that by and large I know that only about ten percent of the human race are capable of forming an opinion at all, let alone one worth missing out on real interaction for. All I know is that things have gotten much worse in that regard since iThings came on the market.


Geez, I wonder who ate his iTwinky this morning? There is lots to be said by Apple, good and bad, but this is just drivel.

Apple merges beautiful design with top of the line performance. It just works. But it has gone down a path where it just does what was designed. They started limiting user freedom and it has gone too far. The problem is that to switch to anything else feels like you're going backwards.

For now I'll push for freedom where I can make the biggest difference, and my iDevices will be a guilty pleasure till the pain of switching is less than the pain of constriction.

posted on Sep, 20 2013 @ 02:12 PM
link
Anybody who queues up for any product, fashion accessory or gadget is an absolute idiot.
It's just embarrassing.

If you're in line waiting for hours, then it better be a matter of life and death. 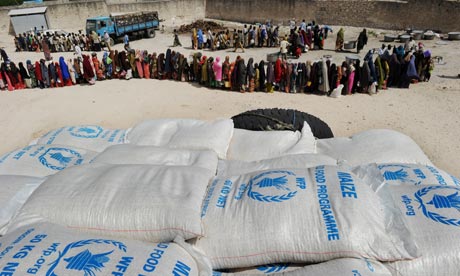