Whatever happened to being a good sport?

posted on Sep, 15 2013 @ 10:45 PM
link
I have been an avid sportsman of a sorts for most of my life. I played basketball, football, tennis, golf, baseball and raquetball. I like to play various card games like gin, cribbage, poker and spades. I like scrabble and backgammon, even monopoly from time to time.

I always play to win in the spirit of competition and never as an adult have I felt the need to cheat...as a kid sometimes we need to learn that cheating is not right.

Being a good sport is not just shaking hands and saying good luck before the game, it is about how the game is played and the aftermath as well.

Team sports are the most difficult to regulate this, but I have seen plenty of childish behavior from adults in individual sports.

Being a competitor is one thing, but trying to rub people's noses in it is entirely unnecessary.

You score a touchdown and do a little dance, you hit a homerun and stare down the pitcher, etc. You know the gist of what I am saying right?

I am extremely tired of the "chest bump", heck the high five is sufficient.

Cheating to win games is the worse though. The old adage "if you cheat to win you have already lost" is the one I heard many years ago and is very true. Even if you get away it what did you gain? Getting caught always bites you 10 times harder.

There are very few players, today that show any class when they achieve something that is recognized as an athletic accomplishment.

Walter Peyton used to just hand the ball to the ref, Hank Aaron just trotted around the bases when he hit a homerun, I would like to see more behavior like this today.

posted on Sep, 15 2013 @ 10:56 PM
link
reply to post by soulpowertothendegree
I think it has a lot to do with men as being a mans man and then there are the fake men who try to imitate or ape if you will what they think real men act like...real men are a thing of the past because of the environment ....they do not have the right amount of testosterone because of the environment and how these fake men were raised....I see it play out in all areas not just sports but its a problem in almost every aspect...I think before too long football will be played in drag.... 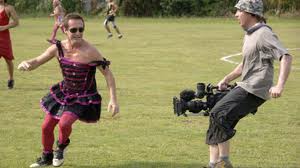 Well, I play pool. I play well enough to go for really tough shots so I don't just clear the table and send my unfortunate opponent away.

It allows me to practice while having a friendly game. Frequently, I make the shot and I get some high profile praise.

The reason I do it is to keep it interesting and still have people willing to play. It isn't about winning (not money games here, I think that is sleazy) but, it is for the love of the game, the physics and the force.

If you are better than your opponent, make the harder shot or the better play. Don't be a dick.
edit on 15-9-2013 by greencmp because: (no reason given)


Good sportsmanship actually went out the window, Soul. Even in Magic: The Gathering, it has turned into a hostile environment where no one is allowed to speak or help each other or work together - there seem to be strict social norms in place against it.

In Magic, there have been a lot of rule changes to turn it into a game of trickery and deception and bluffing more like Poker. Even in individual play groups where one would expect people to be working together to build each others' decks to compete (being friends and all) there is hostility towards any type of brainstorming or information sharing.

If someone tries something new, there is also hostility. It has become rigid, stale and hostile. My best guesses would be some twisted mixture between Atheism and the bad economy as well as socializing being switched to the internet instead of in person -

In fact, businesses have been reporting that they are having trouble hiring people with people skills. Throw that all together and you have a bunch of people struggling to survive who don't know how to work together.

Then, take those same people and sit them down for a game, and they are already going to be pissed off at the world and willing to cut down anyone who gets in their way to gaining power.

I'm not sure if you thought of this, although you probably did, it's actually a symptom of a larger problem in our society. If that problem grows, which it probably will, it is going to be a disaster.

It's called Social Darwinism and it originated most heavily in Nazi Germany during the 1930's +
edit on 16-9-2013 by darkbake because: (no reason given)


P.S. What I am getting tired of is all of these movements that redefine cultural norms and values every 5-10 years, it is hard enough for me to pick up on what I'm supposed to do to fit in without it changing all the time, our country is on the fast track to destruction with its rapid cycling bipolar disorder.

posted on Sep, 16 2013 @ 01:30 AM
link
I realize this is hardly the same as playing a REAL sport but if you want to see poor sportsmanship at it's finest...play an online FPS like Battlefield 3 or something similar. The trash talk online from the internet tough guys is simply beyond belief. All I can say is I have been playing computer games (on PC) since the first X-Wing Alliance (back in the 80's) and I can say without fear of contradiction, it WASN'T always like this. Opponents you faced showed "respect" for superior skill and even praised their "enemy" for their abilities. Teamwork wasn't a four letter word and losing consistantly to a specific opponent meant you FINALLY found a decent teacher. Now, it's all exclusive clans, hacks, exploits and insults. Not sure I am going to bother with BF4...but what do I know.

(Hope this wasn't a derailment.)

posted on Sep, 16 2013 @ 03:36 AM
link
I agree. In the NFL somebody makes a tackle and the pound their chest and get some savage look on their face when really they are just doing their job.

Barry Sanders: the epitome of class! Score a touchdown, hand the ball to the ref. Act like you've been there before and will be there again.