The lack of Carriers could mean two things, and I honestly don't know which. Either Obama is turning a yellow tail to the world and has been for quite some time now with most of the Carrier fleet in U.S. ports for a good % of his time in Office......Or he's showing how he's both intelligent and inept at the same time.

Inept to ever GET us here in the first place, facing a world class show down with pathetic crap for forces. 5 destroyers and an Amphib with a Marine expeditionary unit???? REALLY?! Will he at least send a troop of Boy Scouts to offer first aid? 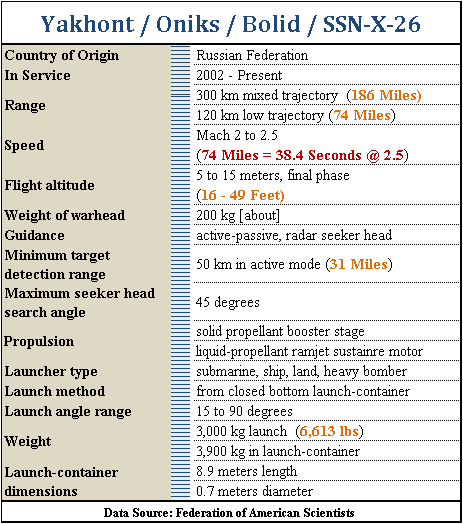 I threw that graphic together last night while making a series of them for a project I'm working on right now. It's one of the more capable and advanced cruise missiles in the world....and it's unknown for certain how many of them Assad has or whether they are on alert for immediate use if needed.

What makes the Yakhont a bitch though are two things. First, it's very real ability to fly the scenic route almost at wave top height for hitting a target...at Mach 2. The other is it's ability and design to work as a coordinated part of a larger whole. Yakhont missiles can be set up to operate as a group and hit a target from different compass directions at once, having launched from the same base originally. Not a nice weapon.....and what I'm hoping is the reason the Navy doesn't want a big flattop up in range of them.

posted on Sep, 5 2013 @ 10:31 AM
link
The San Antonio and ships like her usually travel with an amphibious assault ship which carries an MEU. The Marines she carries are nothing. That number is so small as to be useless. She also however, acts as a flagship for the group. With five destroyers, having a dedicated flagship would be useful.
edit on 9/5/2013 by Zaphod58 because: (no reason given)


Look up SeaRAM. I'll post more on it later.

This is now officially about regime change.


I've been saying from before they announced any plans for strikes that B-2s would be involved, probably B-1s as well. There were too many aircraft moved to the area that told me air strikes, and air strikes could only mean B-2s.


Originally posted by Catacomb
No boots on the ground?


That was my thought too. Why a transport ship if there aren't any 'boots on the ground'??


The presence of the USS San Antonio, or LPD17 as she's commonly known, really has nothing to do with the possible attack on Syria. I know this because the San Antonio is the ship that just relieved my son's ship, the USS Green Bay or LPD 20, which was on station in the middle east for about 8 months.

While these ships do indeed carry approx. 800 marines onboard for rapid deployment, this one was not sent to the region specifically for this Syria showdown. We always keep at least one of these amphibious transport dock ships in the region, "just in case" a rapid response is needed that includes "boots on the ground," anywhere in the region and NOT specifically for Syria.

During my son's last deployment in the region, they made several ports of call for various reasons and the fact that the USS San Antonio is currently in Israel is not uncommon at all. My son's ship made calls on ports in the Persian Gulf as well as ports in the Med. and many other places, both coming and going to the middle east.

While on deployment, the crews of these amphibious ships perform many functions including catching shipping pirates off the coast of Somalia to supporting covert missions in the region, including those carried out by navy seals. I know you probably don't want to hear this but they also participate in some more charitable undertakings like building schools, hospitals and roads in underdeveloped countries. Oh yeah, and from time to time the Marines even go ashore for training exercises in countries like Jordan and Turkey. I would be willing to bet that these troops are far more likely to find themselves ashore aiding refugees from this conflict than actually participating in it. Go figure!

Boots on the ground? Maybe, then again maybe not. But to say that their presence in the Med. somehow signifies that President Obama is lying about his intentions with respect to "boots on the ground" in Syria is just absurd.
edit on 6-9-2013 by Flatfish because: (no reason given)


If the NImitz would be coming around the Suez could that attack a few days ago have been to test for response?

Carriers are designed to protect themselves from a land based attack while out at sea. What about trying to cripple one in the Suez and stop ALL traffic.


Good luck crippling a Nimitz with RPGs and machine guns. The USS America was tested with explosives deliberately set off inside and under her hull (including at least one 2000 lb charge IIRC), and after 25 days of explosives being set off, was deliberately scuttled. She took a lot more damage than could be inflicted by any group without a lot of anti-ship missiles involved, and if she goes through the Canal, I guarantee security will be high, both in her group as they are on either side, with air cover overhead, and on the ground.