Egyptian authorities say 149 people have been killed while the Muslim Brotherhood puts the number at over 2,000

posted on Aug, 14 2013 @ 01:46 PM
link
Check out the news links below for more information, including pictures. The supporters of Morsi and The Muslim Brotherhood formed protest camps similar to Occupy Wall Street that were stormed and cleared by the Egyptian Military today.

Bodies were laid out in a make-shift morgue ext to a field hospital on at least one occasion, and an armored vehicle was pushed off a bridge by protesters. 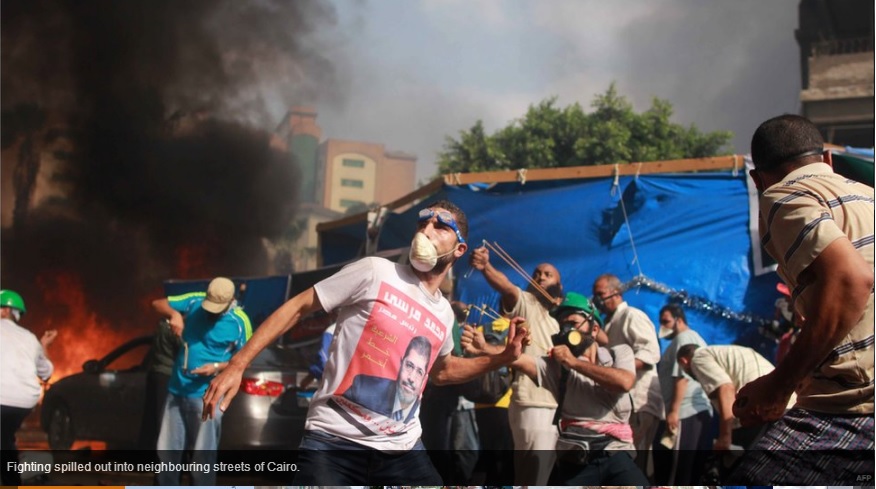 As for my personal opinion, is it shows that protesters armed with slingshots and such are no match for AK-47's, bulldozers and armored vehicles.

posted on Aug, 14 2013 @ 01:54 PM
link
so my only question is, how safe is the Suez for shipments right now?? The people of Egypt have set their own course, but my concern as an American is how this will affect shipping of goods passing through the Suez, and that should be of concern to the Europeans as well.

posted on Aug, 14 2013 @ 01:55 PM
link
How to say this nicely..... Personally I no longer care about the Middle East. They are way over there, I am way over here. Other than some dusty pyramids there is little reason to even visit. Egypt can handle Egypt. I am burnt out from the continuous wars. Until bombs start exploding on my soil it just does not matter to me any longer what they do.

We have no more business getting involved in another Nations business then they do in ours.

Originally posted by DYepes
so my only question is, how safe is the Suez for shipments right now?? The people of Egypt have set their own course, but my concern as an American is how this will affect shipping of goods passing through the Suez, and that should be of concern to the Europeans as well.

Don't worry Walmart will have cheap China made goods in droves. Shipping will continue.

Originally posted by DYepes
so my only question is, how safe is the Suez for shipments right now?? The people of Egypt have set their own course, but my concern as an American is how this will affect shipping of goods passing through the Suez, and that should be of concern to the Europeans as well.

The Egyptian Military is in full control with the backing of the Egyptian people, as near as I can tell. Those 8 million estimated on the streets that helped them remove Morsi. All the unrest seems centered around Cairo and a few running conflict points like the Israeli border area. The Suez is unaffected as far as they say and news reports. If that changes, the UN Multi-National forces are in the Sinai for precisely that purpose, whatever else their public mission.

posted on Aug, 15 2013 @ 02:27 AM
link
hey I get press tv live on my LG smart tv now. I have been watching a lot of coverage from there. I did witness a heap of bodies. More like dozens or scores of corpses though, definitely not 2000. I suppose that number may be coming from people systematically being sanitized individually all over and not the ones killed at the camps where all the people are watching, recording, and broadcasting from.

Hmmm... if only the people of Egypt had a second amendment right to equal defensive power....

news did say a few dozen rifles and some ammo was confiscated from these camps.
edit on 8/15/2013 by DYepes because: (no reason given)

2000 killed.. Yeah... The Muslim Brotherhood/Al Qaeda or whatever you want to call them...sure have some fuzzy math going. They aren't any better at counting in Syria or had been in Libya than they seem to be now with Egypt.

The count announced across international media at the moment (Thursday morning U.S. time) is 412 last I just heard. The M.B. were claiming a couple thousand almost from the time the crackdown started.

Funny thing.... The guys within the M.B. "protesters", wearing ski masks and firing Ak-47's probably killed a few of those people too. It looked mighty crowded out there and while the Egyptian Military are wicked little bastards with those long sticks they use ....they didn't come out with live weapons until the Muslim Brotherhood broke out the AK-47's. The Egyptians have dealt with this twice before now, recently, with numbers FAR larger than these people represent.....and haven't used lethal force like this. It took this provocation of being fired AT.

The footage of the shooting out today is pretty interesting to see. I imagine it'll be across the net soon and I'm just too tired to go digging atm. I think it pretty well justifies what is happening though and God help the Egyptian people if the Military somehow loses this fight. The M.B. won't even play at being moderate this time around.

posted on Aug, 15 2013 @ 05:39 AM
link
It's probably upsetting when your terror tactics are used against you. random killings with only a general target . HUMMM!!! Maybe they are playing cowboys and mooslums.


Well, I am pretty certain that The Muslim Brotherhood is doing some fuzzy math, I have to agree with you.


Well, from what I can tell, The Muslim Brotherhood is an extremist Islamic sect and the military in Egypt has a history of working with the people. I think they would probably be interested in accurate casualty reports.

What doesn't make sense to me is what is going on with the U.S. cancelling their military exercises with the Egyptian military and Russia being able to take the slot within a few days.
edit on 17-8-2013 by darkbake because: (no reason given)


Well... it does seem selfish, but at the same time,

So who knows, I mean leaving the region to instability and letting the Russians maintain it is an interesting change in foreign policy.
edit on 17-8-2013 by darkbake because: (no reason given)

Originally posted by darkbake
reply to post by Mamatus
So who knows, I mean leaving the region to instability and letting the Russians maintain it is an interesting change in foreign policy.

That right there is starting to look like a theory to put your money on. Lets all assume propaganda machine is currently running full time to keep the majority idiots occupied with zombie food (endless media). These barely noticeable significant decisions and cancellations will be blended into that theory becoming fact.


Mr. Obama concluded that the two sides had grown so far apart again that there was no longer any point in sitting down with President Vladimir V. Putin. It was the first time an American leader had called off such a trip in decades.

Mr. Obama will still attend the annual conference of the Group of 20 nations in St. Petersburg on Sept. 5 and 6, and his secretaries of state and defense will still meet with their Russian counterparts in Washington on Friday. But Mr. Obama will not even meet with Mr. Putin on the sidelines of the G-20 gathering, as is customary.

..meetings from now on will be held at lower levels

WTF is that yo? That's like a level of diplomacy a super power would have with Laos, or Djibouti or some other place so remote it cannot even be conjured into thought right now. When do the heads of state of two most powerful military powers suddenly not even speak with each other at a summit?

"We are disappointed with the decision of the U.S. administration to cancel President Obama's visit to Moscow, which was planned for early September," Russian presidential aide Yury Ushakov told reporters on Wednesday. "The cancellation of Obama's visit indicates that the US is unprepared to build a relationship with Russia on an equal footing."
Voice of Russia

President Obama has canceled U.S.-Egyptian military exercises and suggested that aid cuts could be comingsponsored audio link of the actual declaration


Egypt, Turkey cancel navy drills as tensions rise
Both countries claimed to have made the decision the scrap the joint drills scheduled for October, with Cairo saying it had pulled out to protest Turkey's "clear interference" in Egypt's domestic affairs -- an accusation Ankara denied.

The move came after both countries announced Thursday they were recalling their respective ambassadors, following Turkish Prime Minister Recep Tayyip Erdogan's condemnation of what he called the "massacre" of peaceful protesters in Egypt.

Turkey is part of NATO. If Egypt is not seeing eye to eye with NATO, and The POTUS is threatening to actually cut aid to the Armed forces, (and not because he would actually listen to the citizens or congress) , AND the Heads of State are not even meeting eye to eye, AND September the reversal of the Sun's pole will occur as part of the next cycle, I think just maybe it might be a duck

Syria and Egypt are being played by two different players, and I only just now realized it. And here I thought the whole time it was completely 1 sided

It would definitely appear to those with a subtle eye for reading between the lines that some zone of influence has been altered. Oh no, this means the Suez may not actually be in our favor for long

Wow it all seems that much clearer to me now. Does it end in a Stale mate this time... or will there be a victor
(a role reversed 1991)

damn, looks like my government is going to be real angry about this turn of events. I sure hope they don't decide to beat us like a battered house wife


Yes, thanks. When I noticed these changes, especially with the Egyptian army, it seemed to me like there had been some kind of policy change at an extremely high level - or maybe something happened or was discovered that we don't know about.

The situation is entirely out of character.

Honestly, this would be an amazing move by the U.S., as it would leave the Middle-East stable (although under control of the Russians, this is not that big of a deal) as oil reserves move to different places like Alaska, the North Pole and undersea.

It would be an amazing strategical move by the U.S. if it was wanting to reorganize the military to more effective uses, and cut costs by not maintaining order in unstable regions.