The image posted by the member is an obvious image manipulation hoax. 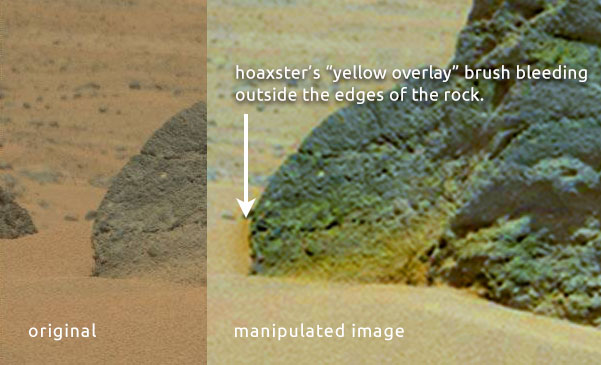 
During sol 349 Curiosity captured a view of two large rocks. As there was some interesting detail to be observed in the image I began to apply a little enhancement to 'bring out' the detail. I do not usually enhance colour images but with this particular image I was surprised at what was showing. It would appear there could well be some form of vegetation on Mars.

What type of vegetation it could possibly be I cannot be sure of, but whatever it is - is green.

Besides the colour information that is showing some of the detail on the surface of the rocks may interest you but these small features are best viewed by zooming in.

Now the big question is, what are all those very small shapes and formations?

Have a look at the image and see what you think. Is it possible that grass could be growing on Mars?

posted on Aug, 12 2013 @ 03:58 PM
link
Cool rock but what I really wanna know is... When are they going to stop artificially coloring the atmosphere red?
Weve all seen pictures of a blue sky before so why dont they just stay consistent.


it looks so much like "Lichen" there is a type of lichen that is called rock pimples I think! and I think too that if it was this, that it feeds on alge. or something like that. but anyway its interesting and thanks for posting, I was beginning to wonder what curiosity was doing lately. 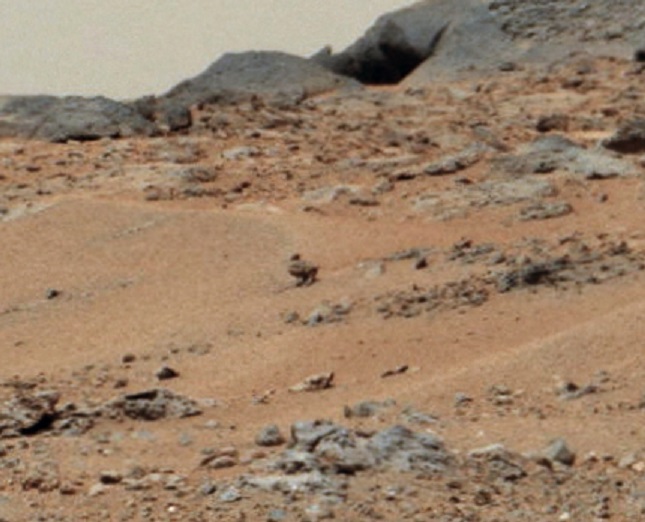 
Correct me if I'm wrong here, but, the original NASA image has no green, whereas your enhanced version does have green. Was the green color an artifact of your enhancement of the original? If so, then, looking at the original, it looks to me like very fine (almost powder-like) wind blown sand particles in the crevices of the rocks.

It shows a rock with dust, the same color as the surrounding sand. Your image has color added where there is none and now you claim there is vegetation? 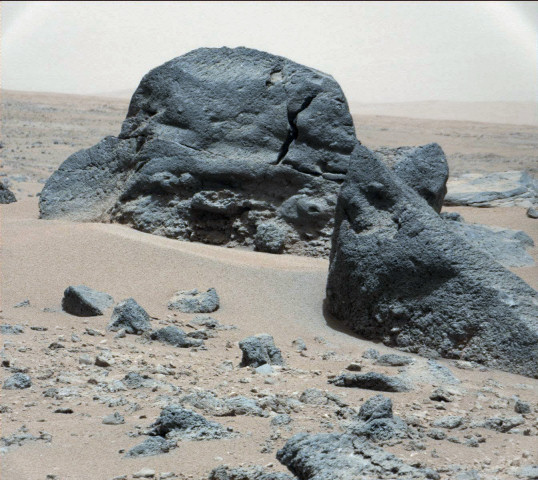 
I love mars anomaly pictures even though they usually catch a lot of flak.
The one thing I did notice is that the original pic from the jpl site didnt show the color as yellow as it shows in the OP.

Originally posted by Sharingan
When are they going to stop artificially coloring the atmosphere red?


They aren't colouring it. Curiosity takes colour images with its Mastcam and MAHLI cameras, same as you would have gotten with a digital SLR camera shooting in "RAW" mode. Martian colour is a kind of butterscotch, pale yellow/orange due to all the dust suspended in the atmosphere. 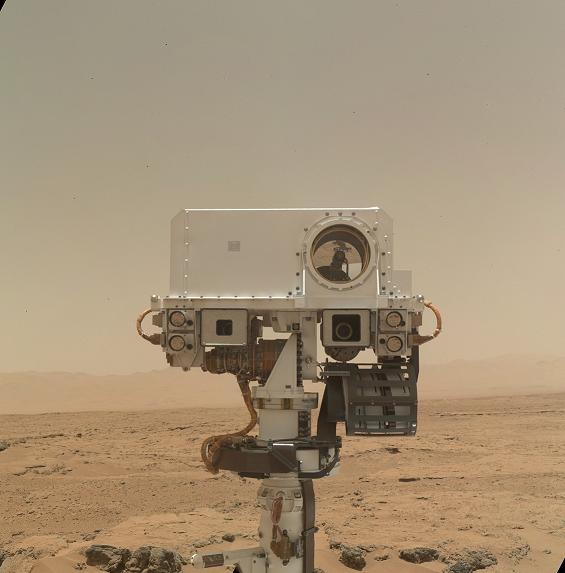 NASA occasionally white-balance Mars images, to make it look as if it were under Earth-like lighting conditions, to allow for better analysis of terrain and minerals. This white-balancing process can make the martian sky look blue.

Black&white images from Mars are sometimes colourised with red hues, and it's up to whoever is doing this what kind of red to use. Many images (especially the older ones) are coloured dramatic dark red, but the real colours of Mars are a more gentle light-brown, tan and butterscotch. en.wikipedia.org...

P.S. I agree with posters above that in the original image it looks like dust that settled into the nooks and crannies on the rock. The small pits and irregularities are due to erosion, I'm sure.
edit on 12-8-2013 by wildespace because: (no reason given)

Seriously, ones like you are the reason I get so much joy out of ATS.


No hun...
You boosted green tones in the image to bring 'grass' on the rock.
As you've noticed, on your enhanced image there is green colour where sky should be. Lichens on the lense? Highly doubt.
Having said that, star and flag for artwork
edit on 12-8-2013 by zilebeliveunknown because: (no reason given)

posted on Aug, 12 2013 @ 04:30 PM
link
It's always good to know that folks here on ATS are monitoring what Curiosity is doing! Here goes a white-balanced version of the image referenced in the OP. I also limited the luminosity rates to the range of available image information: 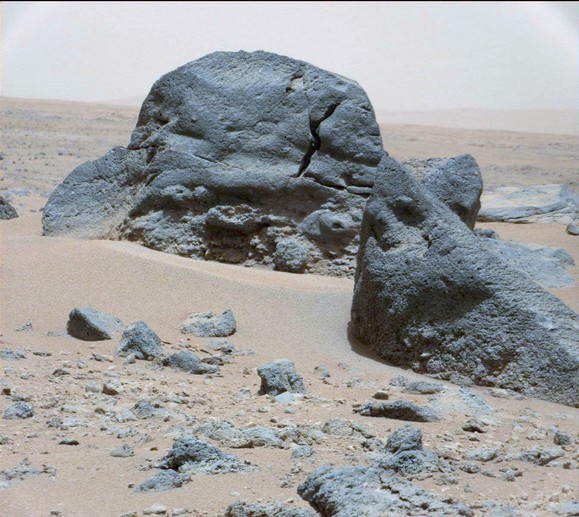 Accordingly, I cannot confirm that there's anything 'green' at the bottom - as proposed by the OP - but the shading seems to be slightly different & perhaps more dusty. I do wonder, however, which kind of enhancement would turn that kind of shading into green? 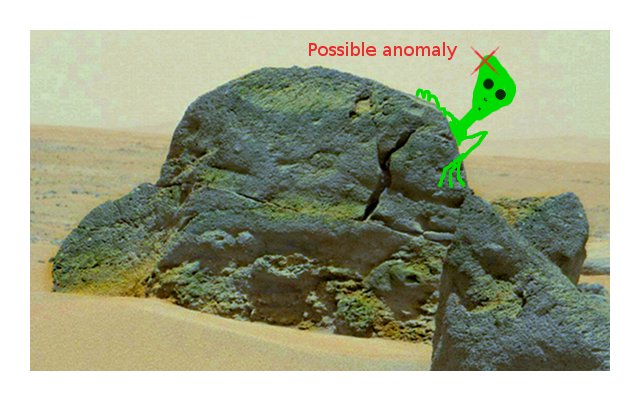 Okay sorry had to, your pic is far intensely tweaked its useless.

Originally posted by zilebeliveunknown
No hun...
You boosted green tones in the image to bring 'grass' on the rock.
As you've noticed, on your enhanced image there is green colour where sky should be. Lichens on the lense? Highly doubt.
Having said that, star and flag for artwork

Since we're giving out stars and flags for artwork, here's my contribution...

posted on Aug, 12 2013 @ 04:49 PM
link
I've run the original image through Paint Shop Pro, and there is no green colour contained in it. White-balancing the image and then increasing saturation of green makes it appear is certain places, but this technique is artificial, and the green spots don't match the ones in arianna's image.

So the OP should read "I took an original Curiosity image and applied some artistic touches to it".


I think this may be the most accurate curiosity thread title that I have seen.

posted on Aug, 12 2013 @ 05:06 PM
link
OP posts a controversial pic and then leaves?
he/she should be here to answer questions about their thread.
especially after producing an enhanced photo of the martian surface and rocks.
maybe they didnt like the replies..
this is not the way to keep your thread going

Originally posted by gortex
reply to post by arianna

A lot of interesting things in that picture.

posted on Aug, 12 2013 @ 05:35 PM
link
Expensive device taking photos of rocks in other planet.
Biased attempt to implant the idea of a lifeless planet.
I don't eat NASA's breadcrumbs.

Planty of green colour in the original image seen HERE in the color histogram.