Orphan Black - Recommendation: The Best Show On TV Is About Clones

posted on Aug, 12 2013 @ 12:51 PM
link
So I thought I would post a thread about a fantastic TV show so that at least one person would be turned on to it because I know I love it when I come across some thread somewhere that suggests a TV show, book or movie that I end up enjoying so much and simultaneously wonder how'd I miss it and what if I'd never found out about it. 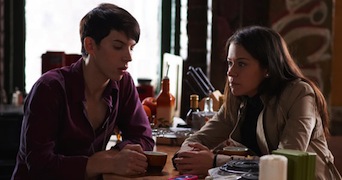 I know there's a lot of you out there that have probably come across it, but for those of you who haven't, if you're into sci-fi or thrillers that are smart, edge-of-your-seat, got-to-watch-the-whole-thing-in-one-sitting, with phenomenal acting, check out Orphan Black. Right now, it airs in the US on BBC America. I guess it's a Canuck show, but I know UKers generally are more likely to know about it than Americans. On my cable system, it's available for "free" in the on-demand section. You can also pay for it on iTunes - and I'm sure other services.

It's about a young woman, Sarah, who witnesses another woman commit suicide by jumping in front of a subway. She's kinda leading a thuggish life a little bit, so she develops the idea to assume the woman's identity for the purposes of clearing out her bank account and moving on with her life (getting back her daughter from her foster mother and supporting her and her brother). Oh, here's the thing, the woman who committed suicide looked exactly like her! 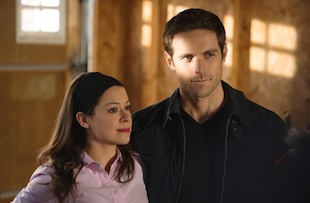 Needless to say, her plan doesn't go as expected and she suddenly and involuntarily enters this world of WTF, with an incredibly interesting and evolving mystery accompanied by one twist after another. I mean, within a few days of witnessing the suicide, this former criminal is a police officer, lives in a fancy house with an expensive car and has a somewhat mysterious, if not cumbersome boyfriend. At the same time, her old life and trying to get her daughter back is forcing her back and forth - not that she'd want to keep the dead woman's identity ... she's unmoved by the urban, upper-crust lifestyle.

So within an episode or two, as the mystery starts being uncovered, we've been introduced to four or five identical women, all with different lifestyles, living in different places, but all with identical features. There's a suburban mom, a German stranger, an evolutionary development student from Minnesota, a trippy Russian religious nut, etc. That's all I'll say so I don't ruin it for anybody that ends up checking out. 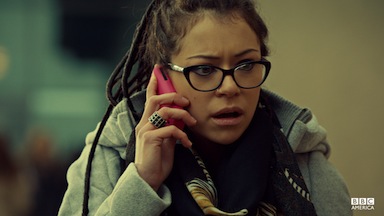 The actress that plays Sarah and all the clones is unbelievable. She plays each part completely different to the point you would think they were all different people, if their face wasn't the same. Each has completely different mannerisms, speech and appearance. It's one of the best television performances I've ever seen.

I'm just about done with season one. By the way, all ten episodes of season one are available now. And season two has already been announced. Part of me wants to stop watching and wait for the entire thing to finish so I can OD the whole series in one sitting - it's so freaking suspenseful and awesome. But I can't stand the idea of not finding out what happens in the few episodes I have left either. 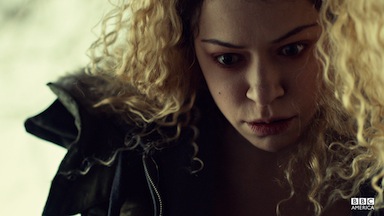 BBC has very good series, you should check out UTOPIA, it only has aired 6 episodes so far, with a renewal for a 2nd season. It is really great. It's all about conspiracy theories revolving a cult graphic novel. Definitely worth a watch.

Thanks for the recommendation!


Wow, thanks for the Utopia recommendation - sounds awesome. I went and checked out some comments/conversation on it on IMDB because it kinda seems right up my alley. Interesting that there's news David Fincher (Seven, Fight Club, Zodiac, Social Network, Girl with the Dragon Tattoo, House of Cards) and HBO have already picked it up for an American version.

It doesn't seem available on iTunes. Anybody know where one can find/watch Utopia?


Yeah, I'm excited about the HBO remake, I want to see what plotlines they come up with... should be interesting.

And sorry dude, where I'm from we can't buy series or music that hasn't been premiered in my country, so I always download through torrents, for free. So I have no links for you to buy


I ordered it based on your recommendation and was hooked after the 1st episode.

I love how absolutely horrible Sarah is in pretending to be a police officer. She doesn't know how to put on her gun or load it, doesn't know police lingo and the look her partner gives her when she calls in on the radio is hilarious.

I only got through the 1st four episodes tonight and can't wait to watch more but, have to go to bed soon. Then again, I'm not in such a big rush to finish off the whole season because then I'll have to wait for the 2nd one to come out on DVD. I don't have cable and my internet is so slow, watching shows on it is literally painful.

Anyway, thanks for turning me on to this awesome show.

BTW: my wife walked in in the one and only sex scene so far and now thinks the whole show is like that. Now, she doesn't want me watching it around the kids. Just my luck.

i just want to take Helena home with me and look after her, she is adorable in her insanity.... i always am attracted to the crazy ones, it's a problem

The suburban clone is Hilarious, Tatiana Maslany should have won an Emmy

posted on May, 4 2015 @ 06:51 AM
link
orphan black is awesome. im in love with this show.
the actress playing all the clones, (tatiana maslany) is an amazing actress. imo she is right up there with the best of them like meryl streep.
she plays these different characters so well.
everything from the way they walk/stand. inflections in their voices...she is amazing

i cant decide who my favorite is.
everyone loves sarah and cosima the most but i think my favorite is helena.
tied for second would be rachel and allison.

posted on Jun, 20 2015 @ 11:25 PM
link
Crikey. Not done yet with this seasons finale but my this is getting interesting. I wondered if it was going to end or be set up for another season and it seems to be the latter. I wanna know what that worm was. Electronic, maybe? Some neolutionist worm to infect Delphine, but with exactly what? Hard to tell and what it's purpose was I can only speculate.

posted on Jun, 21 2015 @ 12:51 AM
link
I liked the first two seasons, but have tried to watch the third one, and just can't muster the interest anymore. Each time my attention drifted off and I started doing other things. I don't know, it's lost it's charm for me.

In my opinion, the best series right now are Game of Thrones, and Orange is the New Black. But to each his own. *shrug*

originally posted by: TheSpanishArcher
Crikey. Not done yet with this seasons finale but my this is getting interesting. I wondered if it was going to end or be set up for another season and it seems to be the latter. I wanna know what that worm was. Electronic, maybe? Some neolutionist worm to infect Delphine, but with exactly what? Hard to tell and what it's purpose was I can only speculate.

of course it was set up for another season.
the creators wanted 8 seasons and it is still a top rated show so its going to keep going.

it was a pretty good finale.
im glad the castor boys are gone.
im curious as to who killed delphine.

was a surprise seeing rachaels 'mom'.

totally loved the way donny and allison lured mark into the garage so helena could mess him up.

that was slick.
she is so bad ass and easily my favorite. i hope next season she is in it more. depending on the time frame we might be seeing helena as a mommy.

posted on May, 13 2016 @ 07:36 AM
link
I guess this show is somewhat popular as it's got it's own version of Talking Dead. The hosts are lousy - not unlike the kid who played on Star Trek:TNG who did that lousy preview of season two, maybe? Anyway, those who saw it know what I'm talking about. They kinda suck but occasionally get a good question in. Hardwick on TD comes off much better and not so fake. That's just nitpicky crap but for them to take up the TD idea means a few someones out there are watching this.

This is why good sci-fi scares me. The science in this is may be a little farfetched but it's not out of the realm of possibility. The transhumanism idea scares the daylights out of me as we are complete idiots and have no idea what we are actually creating.

Anyway, as for the show, they have two new clones this season, at least, Tatiana is killing these roles by the way. This new one is awesome, Krystal. Ok, I missed, or have forgotten, when she was first introduced. Dammit, I had all these episodes on the dvr but have changed from Directv to Dish and lost them and can't get them now to watch again.

Rabbit Hole Comic book shop - it doesn't get anymore ATS than that.

Then there's Kira's "dreams" and what that means.