posted on Aug, 7 2013 @ 05:42 PM
link
JimOberg and Phage have already debunked the "Black Knight" photographs which are actually photos from the 1998 Space Shuttle mission STS-88. Yet, people continue to post in this: www.abovetopsecret.com... thread and others, still questioning. The object is a trunnion pin cover that got loose from the mission. Thanks to the videos uploaded by JimOberg, I've taken stills and compared them to the shuttle photos. In case you don't believe these are all the same object, notice there's a common 90 degree angle with cut-out flaps on one side and a smooth edge on the other. The exception is the first set of photos because of the angle of the cover. Hopefully this will help further put a lid on this: 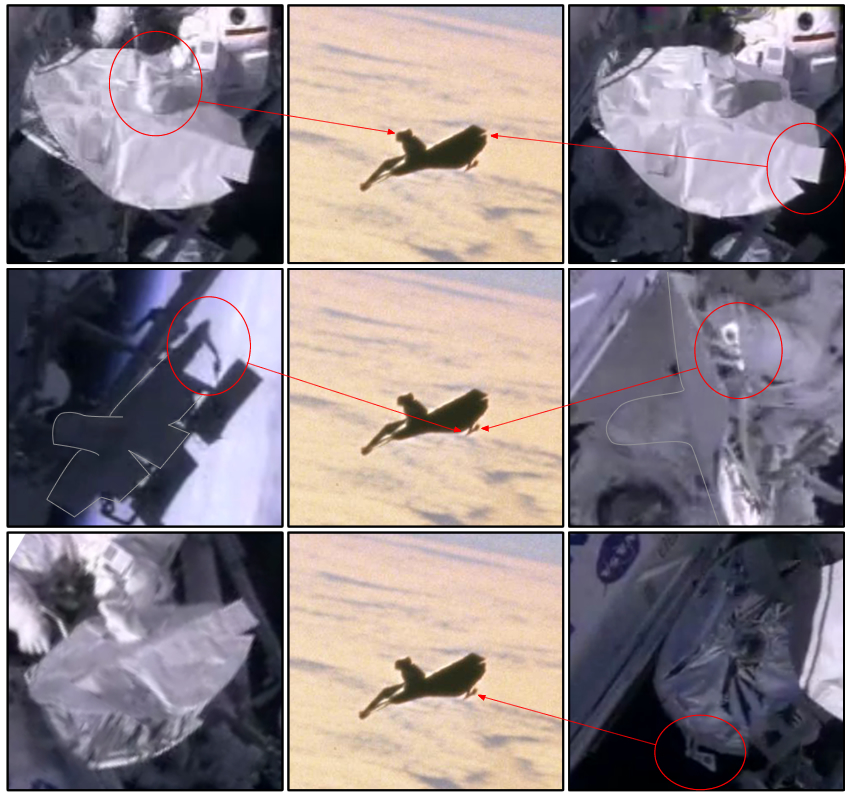 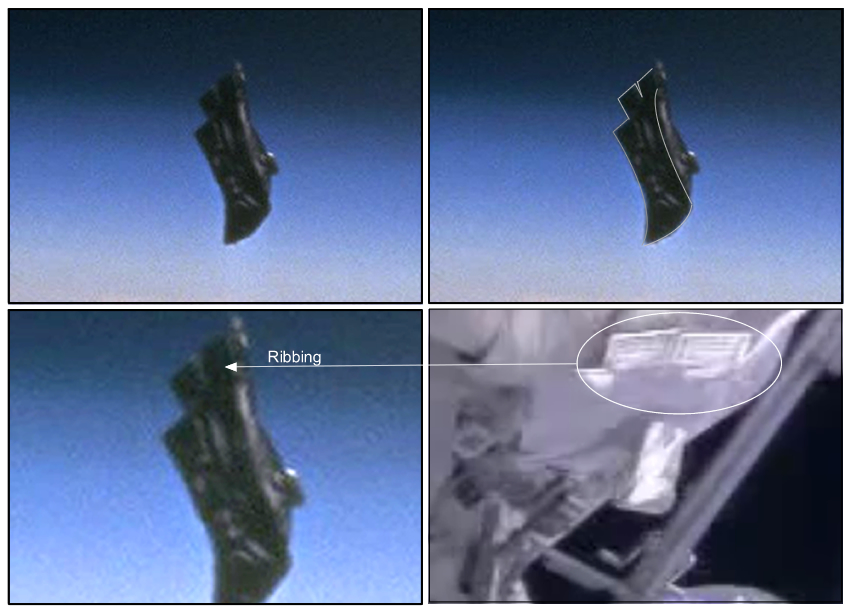 This is the first time I see these comparison pictures. And I have to say, I don´t see the resemblance. I mean, I really tried, but I just cant make it out. It aint that I dont want to see it, because I am open to whatever it might be, be it the "BKS" or a spaceshuttle part. But this is not proof enough for me to make the other case stronger than the other.

But in a more "logical" POV, it´s more likely to be a spaceshuttle part. But this aint the proof for me.

But thanks so much for your effort into the OP. S&F

By the way, why is the colour of the object black in the "BKS" photos, and white in the shuttle detail photos?

Originally posted by Ectoplasm8
Hopefully this will help further put a lid on this: 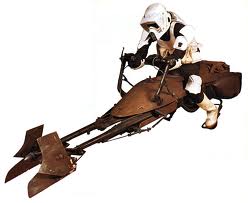 I wanted to add that your thread pretty much nails it. There is no denying that it's a piece of our own junk. Good job.
edit on 7-8-2013 by Cuervo because: (no reason given)

You lost me at ... Jim oberg and phage

posted on Aug, 7 2013 @ 06:30 PM
link
Nice comparison find, yet I didn't find any real identification for this. If you look at the each picture segment, there are different pictures and different objects corresponding laterally...which DO NOT show a point for point direct comparison.

In other words, there are parts of the Dark Knight compared to totally different objects on the left and on the right. In my humble opinion, this thread fails to debunk the mysterious object in question.


Humm...why debunk what could be a satellite...??? But anyway, I don't see how a few objects with a few similar angles translates to the what folks are calling the Black Night...this guy is taking images of somewhat oblong and rectangular objects and trying to connect them to one image? I would love to see it and I could care less if it's a top secret satellite or not but I'm just not seeing the resemblance...


Judging from your history of both posting and creating your own threads...seems you are on here to debunk so I get where you are coming from.....keep at it...

Do not work here. Fed up of "make it fit" answers.


Wow, thank you for doing your research. I will admit I do see the resemblence, and so far you have given a better explanation than anyone else on the subject. I mean, if it were a UFO per say, I have yet to see a single plausible explanation as to what it could even resemble aside from your theory. Keep up the good work! S & F for you, and your work.


How about this. The explanation shows a white object.

The "Dark Knight" is, well, black?

Did it change colour when it "fell off"

posted on Aug, 7 2013 @ 06:55 PM
link
Add in the comments directly from Jerry Ross, the guy who actually dropped it and watched it drift away.

posted on Aug, 7 2013 @ 07:09 PM
link
Nice desperate thread to get attention.. But Im not seeing it either. As one of the top posters replied; its not that I dont want to see it, as yes it is most likely parts from a shuttle - but this is terrible comparisons.

I thought that black knight photos were earlier then '88? Maybe Im mistaken though.

No stars and flags from me, for this poor attempt though


Im sure lighting and perspective are playing a huge factor in this. I'm at work, and can't upload pics, but I do see more similiarities than the OP pointed out between the two.


So you say it is a terrible comparison, and then go on to admit that it could very well be from a shuttle mission?

Nice desperate thread to get attention.. But Im not seeing it either. As one of the top posters replied; its not that I dont want to see it, as yes it is most likely parts from a shuttle - but this is terrible comparisons.

And instead of bringing anything to the table to campaign your doubt, you just call the OP Desperate for attention... Which would make your argument Ad hominem.


Oh sure, i get the whole perspective thing, shadow, light etc.

But, Astronauts (clothing made of similar colour and type of material) don't appear black when in photographs do they?

I don't know maybe they do, but I haven't seen any "Black suit coloured" astronauts?


I don't know. I mostly linger on this site, and poke my head up occassionally. I would guess that there are tons of variables that us simple minded folk don't take into consideration when judging something we normally wouldn't dare examine and comment on. I would say the lack of atmosphere could play a role and also the positioning of the sun in the images. My uneducated guess would be that there is no other objects around to reflect light, therefore causeing a heavier shadow... Key word uneducated... If that makes sense..

Just that this "seems" to be a square peg, round hole explanation offered up.

posted on Aug, 7 2013 @ 07:57 PM
link
Looks good to me. Certainly a more reasonable explanation than an Alien spaceship. (everyone knows they are round saucers!!

It would be nice to know the size of the cover. The dark image may be because it is close to the Shuttle and in the shuttle's shadow, so probably against the white atmosphere, it looks black. Or conversely, the Sun may be shining from behind the cover, and again the white background is much brighter, so the object appears black.
Even the "White" picture of the cover shows dark grays in the creases and shadows of it.

Case closed? On these photographs anyway......

posted on Aug, 7 2013 @ 08:38 PM
link
You really should have posted the video, once you see it floating, spinning and twisting around it becomes obvious that it's the same object in the STS 88 photos.


I now see what folks are talking about and I believe you guys are correct, who would have thunk it...thanks for the video as it helps me get an idea of what the pictures were referring to....case has been solved...bravo folks