Is there a doctor in the house? How about the whole county?

posted on Aug, 5 2013 @ 05:14 PM
link
I was just digging through US census maps of all different kinds in relation to a web project I'm hard at work on when I came across one I thought ATS would really appreciate seeing. It's a US map from 2009 showing the county-by-county situation for doctors in the United States. One color set denotes how many patients to each doctor exist in a county while the other set show which countys literally have NO doctor available on record.

Now there are a few here that came as no shock on that and I've driven across quite a few of them. I can tell you some of the counties shown in Nevada and Montana, for instance, would have a doctor sitting in his office for an occasional miner, traffic accident or misadvernture with local wildlife for nature hikers and not much else.

However, other areas came as a shock for where they are and are not shown as covered. Below is a small sample of the map for it's layout. 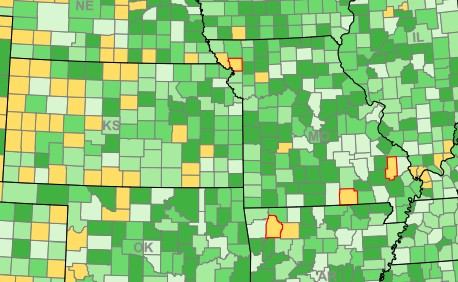 The full map is a few megs worth of PDF at the Census.gov site and of course, comes with the legend to explain the coloring.

So, the next time you call 'Is there a doctor in the house??', there may well be a good reason for silence in return. Depending on where you live? The answer may actually be no!


Not sure if this true or not, but there have been many that say when the Obama healthcare kicks in, there may be even less doctors.

More patients, less doctors = not good for either


s&F for this .. reason being.. I'm currently sitting with my lower back out, like seriously out, like walking like an old man.. happens when I get over zealous ;D anyways.. what's shocking to me is, I can't see a doctor because I'm jobless and nearly homeless, and can't go see one because it'll rake in another 2-3000 dollars we don't have, that will just end up on top of the 60k we owe already ..

double hertina, left knee is ready to snap and go out any any day, and that's just me.. not including my wife's physical issues..

so, all in all, not a bad thread .. issue i really see is...how can a blood born American living in the USA NOT be able to get help from ANY doctor .. free clinic or not .. how is it that all these doctors living all around me won't be able to see a true patient?


As I've been reading it, the adjustments to Doctor's pay and pressures on overall costs to their side of the equation does have a lot of them figuring this is the perfect time to retire anyway. So, Doogie Howser is the future more than the old, wise G.P.. Not much to do on that...

I chose this map with 2009 though so it wasn't really about that. This came before any doctors could or would have been adjusting to political changes and I think, shows a cleaner look at what the medical situation is for coverage due to that. So even leaving out the politics since? That was a surprising map. Not every county east of about center line of the nation is densely populated but there aren't that many that are real light, either. Not that I was in over the years anyway. A couple dominated by National Forest...but oddly, the couple I can pick out by looking without reference aren't shown as those without doctors?

It is a curious thing on that.


show which countys literally have NO doctor available on record.

is simply indicative of erroneous data

You are looking at that to see it's around a 4 year difference in time here between when that was made and your search? Would that factor in?

Anyway... If it's off in a major way, that itself is interesting as it's from Census.gov and U.S. Government figures they DO make policy and planning based upon. In that case, decisions made in 2009, I'd presume. However, that was it's purpose in being made. Government use for Government policy of one sort or another.

The Census site has a dynamic map maker where you can custom make one to any specs you want it to show, but this wasn't from that tool. It was among their existing data collections as Public Domain out of Government used ones.