Prosecutors Free 14 yr.-old Shooter Caught on Video in May, Police Shoot Him Dead in August

posted on Aug, 4 2013 @ 05:21 PM
link
The New York City police shot and killed a "child" alleged to have committed assault, after prosecutors has previously determined that he should not be prosecuted for the allegations, even though he was caught on surveillance video.

14 year-old "child" Shaaliver Douse was arrested in May for attempted murder of another teen in The Bronx, New York.

A 14-year-old boy is facing attempted-murder charges — even as investigators try to figure out his motive in shooting and wounding a fellow teenager whom he apparently didn’t even know, cops said.
Shaaliver Douse allegedly opened fire at Boston Road and Jefferson Place, near Crotona Park at 8:50 p.m. on May 16.
He was taken into custody on Friday and charged with attempted murder, assault, menacing and criminal possession of a weapon, authorities said. 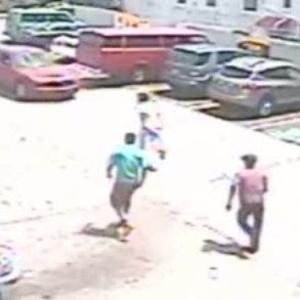 Without explanation, he was released by Bronx prosecutors after being charged as an adult.

The Bronx County District Attorney's Office is dropping the charges against a 14-year-old accused of shooting another teenager.
Police had charged Shaaliver Douse as an adult for the attempted murder of a 15-year-old at Boston Road and Jefferson Place earlier this month.
Prosecutors would not specify why the charges are being dropped, but say the case is pending further investigation.

On Sunday morning, the same "child," formerly charged as an adult, was chased by Bronx police as he shot at another teen in the Bronx. This time, the police did not wait for the prosecutor's office to make the call on how to respond,

A police officer shot an armed 14-year-old boy in New York City early on Sunday after he did not drop his gun when ordered, police said.
After hearing gunshots, two officers came across the boy, whom police identified as Shaaliver Douse, chasing another male down a street in the South Bronx, shooting after him with a 9-millimeter semi-automatic handgun as he ran, police said.
The uniformed officers identified themselves as police and ordered Douse to drop his gun, police said. He did not do so, and one of the officers shot a single round, hitting Douse in his lower left jaw, police said.

No word, yet, from MSNBC, Al Sharpton, or Jesse Jackson about the injustice of this "child" shot down while just running down the street at night.


This was already posted.

What was posted elsewhere was not about the child's history, past charges, pending charges or release.

In fact, there are many members there questioning the validity of the story and thread.

At least this one gives a little depth to the horrible abuse by the NYPD special operations teams.


Agreed. I posted the first one but not with this direction of interest, let alone this depth. I think the story here did a great job of coming from a significantly different angle entirely.