Destiny: A Date with Death

posted on Jul, 28 2013 @ 08:02 AM
link
The Wikipedia encyclopedia defines destiny or fate as a predetermined course of events. It may be conceived as a predetermined future, whether in general or of an individual. It is a concept based on the belief that there is a fixed natural order to the cosmos.

Although often used interchangeably, the words "fate" and "destiny" have distinct connotations.
Traditional usage defines fate as a power or agency that predetermines and orders the course of events.

Fate defines events as ordered or "inevitable" and unavoidable. Classical and European mythology features three goddesses dispensing fate, known as Moirai in Greek mythology, as Parcae in Roman mythology, and as Norns in Norse mythology. They determine the events of the world through the mystic spinning of threads that represent individual human fates. In Islam, fate or qadar is the decree of Allah.

This topic on destiny and death came to my mind after reading two tragic stories recently in the news.
It seems that when it is our "destiny" to die, not much can be done to avoid it. Our fate will lead us to our destiny, one way or the other.

Do you know someone, or a story that seems fate and destiny were too obvious to deny?

Check out these two stories, and share your opinion, please.

This is one I made a thread about a few weeks ago:
www.abovetopsecret.com...
A little tidbit from the post:


Associated Press PAUL FOY 7 hours ago SALT LAKE CITY (AP) —
A lottery system for hikers makes it difficult for many to win a permit to visit a rock formation called The Wave — and that may have colored the judgment of a couple who set out in brutal heat and were found dead along the trail.
Ulrich and Patricia Wahli, of Campbell, Calif., had permits to hike the 3 miles across open country in blazing heat and in energy-sapping deep sand. Authorities said they apparently succumbed to temperatures that reached 106 degrees on Wednesday.


So, this once-in-a-lifetime opportunity ended up taking the life of this couple who were "lucky" enough to win the tickets in the lottery drawing.

And here is the other story:
au.news.yahoo.com...

A pair of hikers who had been rescued after getting lost in the fog and rain inside a Maine state park drowned on Tuesday night when their car plunged into the water off a boat launch as they were trying to leave.

Amy Stiner, 37, and Melissa Moyer, 38, were found dead inside a minivan in 20 feet of water about 175 feet from the boat ramp on the edge of Roque Bluffs State Park, the Washington County Sheriff's Department said. A dog, a pit bull mix who was with them, also drowned.
Officials say the women, who had just been returned to their vehicle by a game warden, took a wrong turn as they were driving away from the parking area.
"The end of the road becomes the boat landing and they just weren't familiar with it," Washington County Sheriff Donnie Smith told the Kennebec Journal.
"It was foggy and rainy and they literally drove off the boat landing right into the water."
Stiner made a desperate call to 911 at approximately 9 p.m., saying they were trapped inside the submerged minivan and that it was filling up with water, according to the Bangor Daily News.
"And then the phone just went dead," Smith said.

Seems if fate couldn't lead them to their destiny with death by being lost in the woods, it would find some other way.
I suppose that's where the saying, "When it's your time to go, you're going to go" comes from.

posted on Jul, 28 2013 @ 05:54 PM
link
your post reminds me of moments of seemingly explicit synchroncity (in 20/20 hindsight of course) which occurred at many of the "crossroads" of my life.

I wonder if these same types of future-hints had happened to these folks, and, had they been more mindful of these hints, would they have circumvented fate.

of course, either way it turns out, we would never know.

Originally posted by Rikku
the moral of the story is... dont be a hiker in the usa.

You cant go through life worrying about death if you really want to live. Worrying about dying is not really living; its just stressing about the inevitable that comes to all living things.

Those people who worry about death... even if they make to it 110 years old, the whole time worrying and doing everything they can to be safe and not take risks... they may have lived long in a chronologic sense, but in a sense of really living and abundantly experiencing, they probably didnt achieve as much as they could have.

Quantity does not equal quality 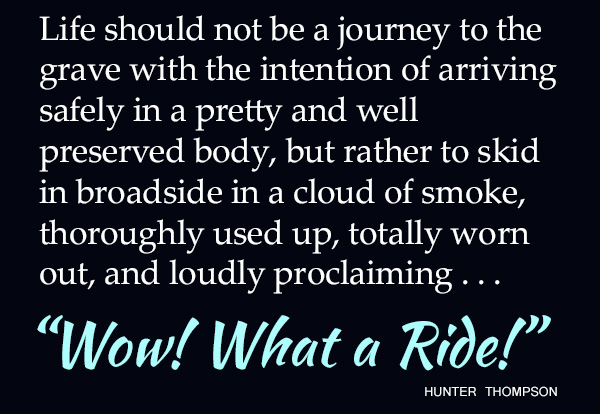 I agree with that 100%. I don't think people should worry about death, after all, the theme of this thread implies it is going to happen when it is meant to happen. So, until that day arrives, live life to the fullest.