Why didn't they use a dog to retrace GZ and TM tracks?

posted on Jul, 18 2013 @ 07:58 PM
link
Although I am no expert in dog smell ability or understanding of humans idea of tracking. But from what I understand dogs have incredible sense of smell and can track their target for miles. They could have used a dog to retrace the paths. Sure the rain could have been an issue but they never tried. And if dogs smell can get a search warrant they can be used here.


The dogs would have peed on the crime scene.

Or, the area was "a dog walk", remember on TV they said the area was where folks that lived there walked their dogs. 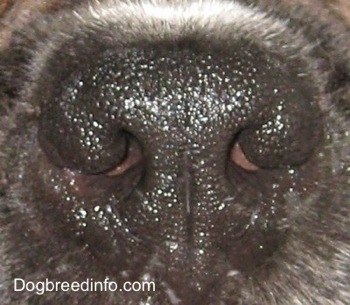 When dogs smell something they are not just registering a smell, they get an entire story. They can smell pheromone, which is not only found in the urine and fecal, but on the skin and fur. From this they can tell a lot about another dog or human including if they are male or female, what they ate, where they have been, what they have touched, if they are ready to mate, if they have recently given birth, or had a false pregnancy, and what mood they are in. They have even been known to smell cancer on people, alerting them to it and saving their lives. This means when your dog smells another person, tree that another dog has peed on, pant leg that another dog has rubbed up against, or chair that someone has sat in, they are actually reading a story, not just smelling an interesting scent. While a human will smell something like spaghetti sauce as one smell, a dog smells each individual ingredient. Unlike humans, dogs can move their nostrils independently, allowing them to know what direction a smell is coming from.

A dog can both sniff and breathe. These are two different functions. Breathing is for air, but when they sniff with short breaths they actually save some scent that does not get exhaled. When a dog is overheated and actively panting, its sense of smell is reduced by as much as 40 percent as it uses the air to cool itself rather than for smelling.

Puppies have heat sensors in their noses to help find their mother during the time when their eyes and ears are closed. These sensors disappear by the time they are adults.


Could have atleast tried. Just like DNA we knew what we would find but did it anyway. I think the dogs properly trained could preform such a feat but I am no expert.

ETA it could have shown if GZ or TM backtracked or if zimmermans path is consistent with statements as well as TM path against rachel.
edit on 18-7-2013 by marbles87 because: (no reason given)

This may be hard to believe, but I'm starting to forget about the case, and am losing interest in it.

Let's say the dogs track the paths perfectly. They can't show physical assault. We've got an eyewitness confirming that Zimmerman was on his back, unable to escape, while being beaten. we have scientific evidence and witnesses saying Zimmerman was crying for help for 40 seconds before the shot was fired into Martin, who was leaning over him..

The defense used self-defense as a justification.

How are the dogs going to help? What can they possibly show to change anything?

2. Dogs can not give evidence in a court case.

3. The handler can't ask the dog what he is tracking.

Court cases are bad enough without having to guess at what a dog was tracking / thinking.

Consider also that a dog cannot time line a scent trail of this type. It is the timeline that is critical.


Missing my point. Of course a dog won't put on a suit and tie and answer on the stand but info provided could have offered evidence on wether GZ or TM back tracked or lied about their paths.

Originally posted by marbles87
reply to post by pheonix358


Missing my point. Of course a dog won't put on a suit and tie and answer on the stand but info provided could have offered evidence on wether GZ or TM back tracked or lied about their paths.


Just how does the dog know if someone has backtracked and how on earth is the dog going to communicate this information to the handler. How does the dog know what trails are ten minutes old and which are eleven minutes old. There is also no way of knowing if the dog is following the exact trail. They are trained to track and find the suspect not run in circles like CSI investigators.


So if a dog traced GZ path from his car to a place non consistent with his story you wouldn't use it as evidence even if the evidence is less than concret. Granted this would have only been used for the prosecution obviously. Never try to introduce evidence that might contradict your story. I'm upset that there were so many more things the lawyers could have done to make what happened more clear. Like someone wears a hoody and acts out the part to see where the hoodie may have draped over like his hands and how the front of the hoody was covered in GZ from laying across his face as he was punched and the hoodie damped the blows to TM hands which explains no DNA on hands. No one brought this stuff up


Because the case was pretty clear, and this is obvious as the jury didn't take long to reach a verdict.


At one time DNA wasn't very credible now it is rock solid but it wasn't untill people started trying these new tactics that we get better and better trials. As we move foward it is our right as Americans to know that when I contributed my tax money to this EVERYTHING was done to bring the truth. This case was far from having all the facts we know we could have added. Unless people takes the step to say "I trust this enough to use in court" we will keep getting these trials full of holes.


I'm glad you brought up taxes. Your solution seems to be going balls to the wall to try every case. Who is going to pay for that? US...that's who. If there's reasonable doubt, you acquit. Simple as that. NO amount of additional info is going to take away that level of doubt in this case.

This case was never about the TRUTH. We knew that going into it. He and the kid got in a fight, he shot the kid. It was about painting someone falsely as a racist, and trying to prosecute him for it. Granted, his actions were morally wrong, but under the current law, legally permissible. The base problem lies more with the wording of the Stand Your Ground law, than with the parties in the case, and that has NOTHING to do with race.

This is a small point, but now D.C. has announced they're going to look into "Stand Your Ground" (SYG) laws, so I think it's pertinent.

SYG is an entirely seperate staute from self defense in Florida. The defense team never used SYG as a justification, it was not ever a part of the trial, it has nothing to do with Zimmerman.

Every state has a self defense law, they vary a little, but self defense has been recognized as a justification, basically for ever, and that won't be changed.

P.s. Oh, and the lack of DNA on Martin's hands? It came out that his hands were washed before the exam could take place. - C -