posted on Jul, 13 2013 @ 05:20 PM
link
Republican politicians are masking their disgust for women who seek abortions under the cover of the Texas Bill HB #2, by claiming their motivation is to protect women. But, this couldn't be further from the truth, and the bill itself lays out the falsehood of this claim within the first few paragraphs. 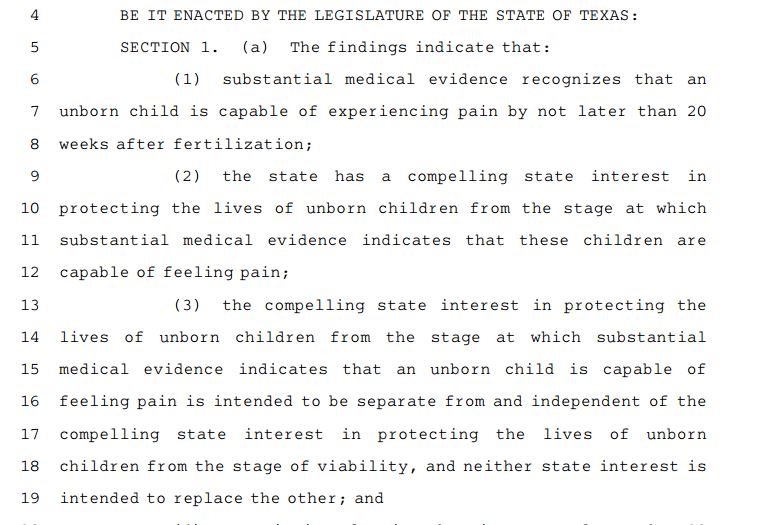 This bill isn't about protecting women, it's about protecting a fetus from pain. But the medical community doesn't agree with the findings of this bill, arguing that fetal pain is a complex mental process that can't be claimed to be experienced by a fetus until at least 24 weeks.

A 2005 paper in the Journal of the American Medical Association surveyed the medical literature and found little evidence to support his conclusions. There is an established body of evidence that finds that fetuses start developing the biological pathways related to pain sensation at this stage of gestation, but there is not enough evidence to suggest that they can actually experience pain as we do. The majority of the scientific literature on the subject finds that the brain connections required to feel pain are not formed until at least 24 weeks.
www.motherjones.com...


Honestly if these people really wanted to protect a fetus from pain, they would outlaw vaginal births and force all women to deliver via C-Section.

This bill violates Roe V Wade, which states that abortions are legal up to viability. The Texas abortion law ignores viability in favor of unsubstantiated and questionable claims of fetal pain, as the cut off point for elective abortions.

The American Medical Association claims that pregnancy begins at implantation, but Texas disagrees, claiming that pregnancy starts at fertilization and that the gestational age of the unborn should be calculated from the first day of a woman's last period. This makes a woman pregnant before she's actually had intercourse!

Additionally, the Texas abortion bill, designates all birth control that impedes a fertilized egg from implanting in the uterine wall as abortion, by definition. It implies the regulation of IUD's devices and all hormonal birth control under this bill. It required that the Morning After Pill, that the FDA approved for over the counter sales, to be administered by and in the presence of a physician at an ambulatory surgical clinic, after a 24 hour wait period and a vaginal probe, of course! I assume the same goes or an IUD or birth control pills.

This bill also has the usual trap laws that disallow doctors without hospital admittance privileges, but federal judges in 3 other states have already blocked those laws.

U.S. District Judge William Conley granted the order following a hearing in a lawsuit filed Friday by Planned Parenthood of Wisconsin and Affiliated Medical Services. It alleged the requirement would unconstitutionally restrict the availability of abortions in the state, violates the U.S. Constitution's due process guarantee and unconstitutionally treats doctors who perform abortions differently from those who perform other procedures.

The restraining order will remain in place pending a fuller hearing July 17. In his ruling, Conley said "there is a troubling lack of justification for the hospital admitting privileges requirement." He said the U.S. Supreme Court has ruled that states must prove that restrictions on abortion rights must be reasonably aimed at preserving the mother's health.

"Moreover, the record to date strongly supports a finding that no medical purpose is served by this requirement," he said.

So basically, what this Texas Abortion bill does is,

1) It establishes that perceived and unsubstantiated fetal pain outweighs a woman's choice, ignoring Roe V Wades ruling on "viability" as the cut off point, placing a new cut off point at 19 weeks instead.

2) Contrary to the American Medical Association's definition, this bill asserts that pregnancy begins at fertilization, instead of implantation.

3) It determines gestational age at a pre-intercourse date.

4) It defines contraception methods as abortion and therefore applies it's regulations to the application of contraception.

5) It unfairly discriminates against abortion doctors.

I predict lots of law suits and court injunctions for Texas in the near future.

This bill is about so much more than just abortion. Many people get caught up on the 20 week cutoff that they fail to realize everything else that this affects. Outlawing abortion after a certain point is such a small piece of this monster, but its the one that most are choosing to focus on.

Republican politicians are masking their disgust for women who seek abortions under the cover of the Texas Bill HB #2, by claiming their motivation is to protect women.

Perhaps they are just think they are stopping the murder of children. That is actually a very real and fair argument for what is going on in Texas.

Would you like me to portray Democrats as baby killers?

If you want to debate facts fine, but leave your emotionally charged partisan politics at the door.
edit on 2013/7/13 by Metallicus because: Readability

There's so many misunderstandings in this bill, and it was really hard to find a copy of the bill online. So when I finally did find a copy of it, I thought I should post it, and my (emotionally based) opinions of it.

posted on Jul, 14 2013 @ 08:34 AM
link
There's another aspect of this bill that has been over looked, and that's the cronyism and nepotism withing Rick Perry's family and how they will benefit financially from the passage of this bill.

One of the biggest issues with the impending abortion restrictions in Texas is the part of the bill that will require all abortion clinics in the state to be licensed as an ambulatory surgical centers, thus requiring all but five clinics in the state to close. This despite the fact that there is absolutely no data showing that any of these clinics are at all deficient. The GOP, however, isn’t exactly the party of reason and science, so they likely consider things like “data” to be fairly inconsequential.

Given that closing abortion clinics does not reduce demand for the procedure, the 420 other ambulatory surgical centers in the state that don’t currently offer abortions may now be considering performing them– albeit at a much higher price than the clinics have been.

Milla Perry Jones is Rick Perry’s sister. She is also the Vice President of Government Affairs for United Surgical Partners International… which just so happens to own many of these ambulatory surgical centers. She also happens to be on the board of the Texas Ambulatory Surgical Center Society. This means that she, and the company she works for, may end up profiting quite a bit from all of these abortion clinics shutting down, should they decide to start performing the operation.

posted on Jul, 16 2013 @ 07:37 PM
link
If your interested in more information about this bill and others like it, and how will not help women or protect women, but will actually, really kill women, please take the time to look a this moving article.

My Family, Our Cancer, and the Murderous Cruelty of Conservatives

But there were other feelings that struck us hard: fury, dismay, contempt. Not at our situation, but at the realization that untold thousands of women would not be as lucky as Theresa. Instead, they will die because of conservatives’ endless efforts to block poor women from having access to mammograms, breast exams and treatment. Theresa detected her cancer early enough that we feel confident she will survive. But we’re both aware that, right now, there are other women who don’t know they have this vicious invader growing inside them and will not find out until it is too late. Their husbands and loved ones will not have the chance, as I do, to sit in the waiting room of the hospital, and instead will stand at the entryway of the funeral home.

Many Republicans, either out of self-delusion or deceit, deny they are causing any such thing. But there is no question that, in their obsession with zygotes, embryos, and non-viable fetuses as part of their supposed pro-life stance, they are effectively murdering real, walking, talking women—mothers and daughters, grandmothers and sisters, all sacrificed on an altar of Pecksniffian hypocrisy and contemptible disregard by people who have the insurance, connections, and available health care to feel certain their politics won’t kill their loved ones. Perhaps Theresa and I are re-directing our anger from the cancer, but so be it; our rage has focused on the financially comfortable, morally blind, and arrogantly self-righteous who tyrannically conspire to rob poor women of years of life they might otherwise have. It is for this reason that Theresa is willing to disclose her condition, in hopes that, in doing so, we will help highlight how politicians are blithely choosing to kill women who are not as fortunate as she is.

One of the requirements of the legislation is that any facility performing abortions must have a doctor on staff who has admitting privileges at a hospital no more than 30 miles away that has an obstetrical or gynecological health service. This is something that the Texas Hospital Association says is a bad idea. But when asked in the course of the House “debate” to define the words in this requirement, Burkett could not even explain what admitting privileges are! She, like the other forced birthers in the debate, just picked up the idea from the anti-abortion crowd that advanced it in states around the country as a means of shutting down clinics that provide the procedures.

But her lack of knowledge is nothing compared to that of Rep. Jodie Laubenberg, the bill’s author and the primary proponent of both the “rape kits can stop pregnancies” and “fetal pain at 20 weeks” nonsense. (She is also the legislator who, famously in Texas, opposed state funding of prenatal care—essential for the health of babies—because fetuses “aren’t born yet.” The sanctity of life, it seems, is not as important as the sanctity of tax dollars.) If the consequences of her ignorance were not so dire, Laubenberg could perhaps be forgiven for it. As she has zero medical training and her sole background credit is as a city-council member in a town of just under 4,000 people, there is no reason to expect that she would know anything about health issues.

These laws will shut down clinics that are the only means for many poor women to access health care. This is a very powerful and relevant article. I hope everyone reads it.