posted on Jul, 12 2013 @ 04:20 PM
link
I was listening to the radio and they played this clip and from the first name I was thinking something seemed a litle off...

Apparently confirmed by an NTSB official.

This is how dumb the media is when trying to scoop other stations. This is why you don't believe everything you hear on TV, and why when something disastrous happens you should expect the story to change.

I'm betting someone just called in, said they were so and so with the NTSB returning a call, and in the excitement of being first with the news they just said screw it.

I still can't stop laughing but this does highlight how dumb the media can be.

Happened to the "Heroes" on Colbert report, and he read them on air (and laughed):


I forgot about that! Makes my eyes water, especially seeing Colbert lose it. 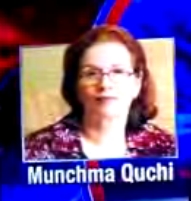 
Gee, thanks - the pilot names already had me reeling, then I completely lost it when I watched that. Now my side hurts. Must've missed that episode somehow... wow.


Colbert is satire and scripted. It's expected. A news anchor should think twice when getting news reports about Harry Paratestes.

thanx for the laugh , really thanx , i needed that

You think that talking head was embarrassed after the fact??

No, your right, probably still clueless.

posted on Jul, 12 2013 @ 06:15 PM
link
You think that someone would have read those aloud before posting them on the teleprompter.

is it a FOX News affiliate?

OMFG IT IS A FOX AFFILIATE! I KNEW IT!

FOX News, once again failing at fact checking.
edit on 12-7-2013 by HauntWok because: (no reason given)

posted on Jul, 12 2013 @ 06:23 PM
link
I couldn't stop laughing after watching the video of the newswoman so casually listing off totally ridiculous names.

I stopped laughing when I read everyone call it "racist" to have fun with names.

They could have said the pilots were:

I'm sure nobody would have mentioned anything racist if that was the case.

But that wouldn't make sense as it was an Asian airline. The colbert skit shows that fun with names can be applied to any other nationality. I'm sure a lot of "western" names could sound like funny things in other languages, and I bet they take full advantage of it too.

Calling non-events like this racism only distracts from TRUE racists. Making some fun with foreign names isn't racist, and if you think it is, you have obviously NEVER seen real racism.

Please ad to the ongoing.