posted on Jul, 9 2013 @ 10:03 PM
link
The last week I have been receiving strange reports from my wife about an apparently new critter roaming the mountains and pastures. I plan on actually going to take a look for myself tomorrow, but maybe someone here can clue me in on what this might be.

My wife raises rabbits and gathers fresh grass from the edges of our hayfield each morning. The field is about 5 acres and about 1/8 mile from the house, stretching between the road and the treeline of a small mountain. A few days ago she told me she saw a critter standing looking at her about halfway between the road and the mountain. She described it as black, about the size of a small black bear but taller with a stocky build, with a round head that had a lower protrusion she described as "horse-like." It was not a bear; she has seen them before and knows what a bear looks like. She was alerted by the dogs moving away from it and her, apparently afraid of it, and when she looked it was just staring at her. After a few moments, it trotted into the mountain and vanished. I should mention that the dogs are not exactly the bravest critters I have ever seen, so it's not like a Rottweiler is hiding and whining.

My intention was to go check for tracks, but later that day the rain set in and washed away any possible tracks.

A couple days later the rain let off for a little bit and she hurried back to get more fresh grass. This time she found a wild rabbit with its head severed cleanly, uneaten.

Today she returned to tell me she had found several animals, rabbits and squirrels, arranged in a rough semicircle with their heads severed cleanly and uneaten. They were located about midway of the field... common territory for rabbits, but squirrels stay closer to the treeline.

The area is inhabited sparsely, but has plenty of wooded areas. Across the road is an old swamp between fields and another mountain beyond that. There is no hunting allowed on the property (and we do enforce that!) and anyway, what human could catch a rabbit or squirrel to cut its head off? And why?

That's about all I know for now. I'm not saying it's some boogeyman monster, but I honestly have no idea what the critter she saw was, or what would/could cut an animal's head off so cleanly and leave it lying. Any ideas would be appreciated.

posted on Jul, 9 2013 @ 10:07 PM
link
It's possible it could've been a malnourished young bear or perhaps a badger?
Or maybe it was a cougar. They do exist east of the Mississippi north of Florida.

No, she knows what a bear looks like. This was in broad daylight, so I don't think that was it. She also said it was too tall for a bear.

Badger? Would have to be a HUGE badger.

Cougar (we call 'em mountain lions here)? Not the right build, and not a feline according to her.

Thanks for the response though. If I see anything tomorrow (tracks or other evidence), I'll try to get pics.

A couple days later the rain let off for a little bit and she hurried back to get more fresh grass. This time she found a wild rabbit with its head severed cleanly, uneaten.

Today she returned to tell me she had found several animals, rabbits and squirrels, arranged in a rough semicircle with their heads severed cleanly and uneaten. They were located about midway of the field... common territory for rabbits, but squirrels stay closer to the treeline.

Are you sold on the idea that what she saw and this odd arrangement are related? That sounds distinctly intelligent (i.e. Human) for displaying after killing. The same with no evidence of eating on them? I don't know if there would be anything to find short of a necropsy, but if not for the sighting seemingly overlapping? I'd say some sick individual near you got themselves a new tranq gun or other non-lethal means of taking down small game.

I say sick, because the outcome obviously isn't any healthy reasoning...but it would explain the animals (not easily caught but plentiful), the arrangement and the mutilation. Some warped idea of a ceremony or something? I'd certainly check everything out with a very capable sidearm with you. Something really isn't right about all that. 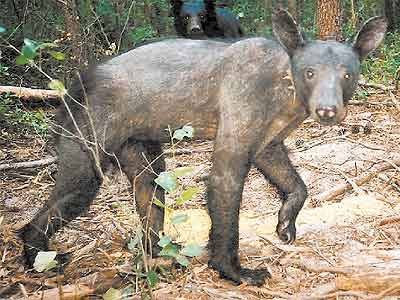 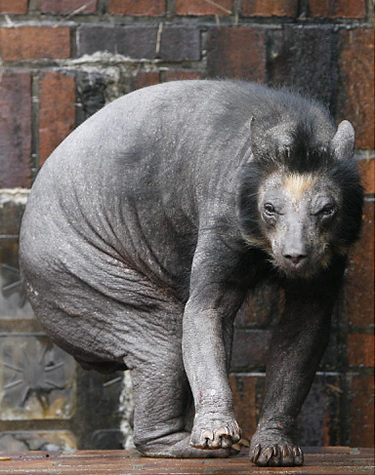 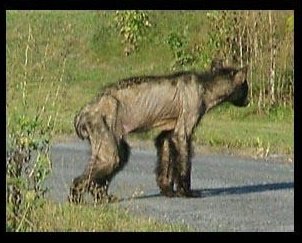 posted on Jul, 9 2013 @ 10:26 PM
link
I think you may just have a bear around there that is either a different kind than you are used to seeing or it is a teenage bear that has some issues like parasites that is making it look strange.. Maybe it's just mutated for some reason. I saw a weird black bear here crossing the road with other bears years ago near the copper harbor dump.. It looked way different, kind of scrawny fir and a different shaped body than the rest. Maybe it was an alcoholic bear, eating too many fermented apples Reminded me of a few guys I knew from the bars that drank too much and didn't eat much.

I think the best way is if you see it, then take a few pictures. If it is killing animals and it is a bear, I would carry a gun. It may have something wrong with it, something that makes it mean. Big gun, preferably one that doesn't jam.

posted on Jul, 9 2013 @ 10:27 PM
link
please keep us updated on what you find out. I know i am definitely very interested in hearing more of what you uncover

I'm not sold on the idea, Wrabbit, as it might just be coincidental that she saw the critter days before finding the animals. The first thing I thought of when she told me about the animals being beheaded was a person, but I couldn't figure out who could run one of them critters down to do the deed. The tranq gun idea is interesting!

About two weeks ago, my neighbor was leaving for work around 5:00 AM and looked across the field from his yard. He saw a green car, he described it as one of the wanna-be musclecars from the 80s, parked across just out from that field in a smaller one. There is a culvert with a gate there that had been left open, and where he was parked would have been invisible from anywhere except the end of my driveway or my neighbor's house next to the field. He reported a single male (unable to determine if there was a passenger) walking back to the car from the direction of our place. He got in and took off. My neighbor tried to catch up to him to get a better description but couldn't... knowing how the guy can drive and the area, he had to pull off in another hidden spot. I closed the gate and a couple days later put a lock on it. The day after I put the lock on, someone saw a green car driving back and forth, slowing and looking at the gate. I know someone had opened the gate between the time I closed it and the time I installed the lock; the chains were wrapped differently.

We haven't seen that car since, though. I figured it was probably someone either parked with a lady or for other illegal reasons besides theft or vandalism, but I didn't want to take the chance. I know all the cars that belong to folks living around here, and it's not one of them.

He could have been hunting with a tranq gun, I suppose.... if so, he could be parking somewhere else and walking in.

I just showed her all three pics. She's sure that isn't what she saw.

Thanks for posting pics, though.... makes it easier for me to ID with her.

I can't say definitely it isn't a bear, but she keeps saying it's not, even with the pictures Defcon posted. It didn't show any fear of her, and that is a bear trait. Of course, that would also not explain the dead animals. I'm really as concerned about that as I am the critter. I don't like anything in this mountain not understanding I am the top of the food chain.

Not sure if I'll be armed tomorrow or not, but if need be I can go back with a .444 lever-action Marlin. If it can hold six of those (my personal loads) and not fall down, it can have the place!

An armor-piercing round out of that toy will penetrate the front of a car, through the engine block, and out the other side.

If I see anything, I will definitely take pics, don't worry. I will have the cell phone (2 Mp).

Damn, hadn't thought about that. She didn't see tusks though. Maybe I need that Marlin; wild boar are mean critters!


Hopefully it isn't this big articles.orlandosentinel.com...

I guess the pig roaster my brother made out of the 250 gallon oil tank might be a little small for that critter. Might do one ham at a time.
edit on 10-7-2013 by rickymouse because: (no reason given)

After a few moments, it trotted into the mountain and vanished.

Did she what kind of tail it had? What the ears looked like? Just trying to look for something that might give more clues as to what kind of critter it was.


Two things that struck me....

1. Malnourished bear or any animal doesn't seem plausible to me. Sounds like what ever it is its not have a problem catching prey.

2. The behavior of displaying the prey reminds me of what most outdoor cats do. The bring prey items home and leave them at entrances to the home or even bring them in and leave them for the owners. Its been my understanding that cats do this to share their kills.

it isn't a bear

Probably a bear...or a badger

Anyway...did she see the creature more than once ? Were there any tracks around the animals you found with severed heads ? I realize you mentioned the rain...none the less...the imprint of a heavier animal might persist.

posted on Jul, 10 2013 @ 08:23 AM
link
missing 411..this thing could be responsible for human dissappearances, if you go looking for it be armed with firepower.


You may have been visited by a fisher or a marten. Both animals look similar. they are unusual in Ky but I have seen my share of strange things in the mts of Ky, Tn, WV.

I just asked her those questions:

Tail: she didn't notice the tail. I am assuming that means it was not prominent.

Ears: Small, upright, similar to those of a deer. She also said it trotted with a similar gait to a deer. Are there black deer? I've never heard of one.,..