posted on Jul, 6 2013 @ 12:06 PM
link
I am posting this as I had an interesting dream a few nights ago. I am not one to read to much into my dreams but even after a couple of days the dream is still resurfacing in my thoughts. Naturally I can't remember everything, however I remember a particular part with great clarity.

I remember being in my room and I could hear the dog barking. I ran to the kitchen and the dog was in the middle of the kitchen almost being thrown around, seemingly in a losing fight against an energy force of some kind. It was almost as if the dog was in a vortex, I could also see colours of blue energy which led me to believe this was a conscious force with a lose form attacking the dog in some manor. I cant remember how this moment ended but I then remember reaching a point where the dog was shaken but riled barking at the closed kitchen door.

I opened the door to look outside and then I immediately realized I was now the focus of the energy. I looked to the floor and there were one or two small red hand prints on the floor. These prints started to appear in a grid pattern until they formed a square of roughly 25 prints. You might assume that these were in blood but I believe it was just red paint of some kind. The prints were appearing towards me and although I think other things were also happening around me the main image in my head is of these hand prints.

I have created a very basic illustration below, the prints were actually more to the left where the bins are. The image does not do the memory justice but at least it gives you an idea. I am interested what your thoughts are? 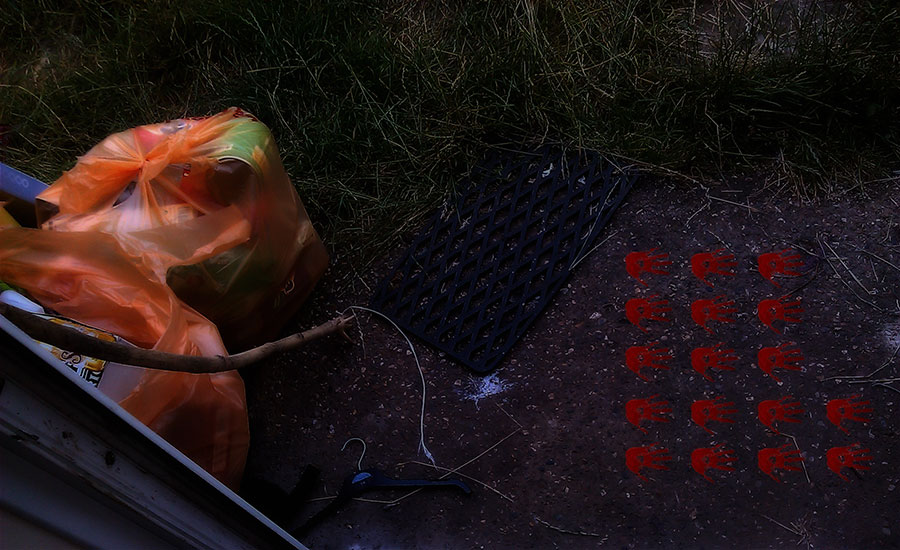