posted on Jul, 5 2013 @ 09:11 AM
link
At lest 3 people have been killed when Egyptian troops opened fire on morsi supporters.

They were marching on the headquarters of the republican guard and when a protester hung a picture of Mori on the fence the guards tore it down and told them to stay back.

Then they rehung the picture and the troops just opened fire.. wtf?

IS this what all the anti Morsi protesters wanted? I doubt it


Egyptian troops opened fire on supporters of ousted President Mohammed Morsi who were marching on a headquarters of the Republican Guard on Friday, leaving at least one severely wounded, as tens of thousands chanting "down with military rule" protested around the country voting to return the Islamist leader to office


eta tweet
Egypt's army claims that it did not fire on Morsi supporters in Cairo, used blank rounds and tear gas, spokesman says
edit on 5-7-2013 by goou111 because: (no reason given)


This is from my link


an Associated Press photographer at the scene said. Several protesters fell bloodied to the ground. At least one had what appeared to be a severe, bleeding wound to the head

He might decide to arm the Pro- Morsi 'rebels'. No wait, they were the ones that were going to be getting the F-16 and tanks..... What will he do?


Army did not fire on pro-Mursi protesters - spokesman

CAIRO, July 5 (Reuters) - Egyptian troops did not open fire on supporters of ousted President Mohamed Mursi on Friday, an army spokesman said, after security sources said three demonstrators were shot dead by security forces in a protest near where Mursi is being held.

posted on Jul, 5 2013 @ 09:38 AM
link
Seems to early to really say but if it did happen we will hear about today. I dissagree with any military that fires on unarmed civilians no matter what the cause be even if they broke the fence down and were storming the building still no right to use arms on unarmed people.

Originally posted by goou111
Egyptian army is denying it
live.reuters.com...


Army did not fire on pro-Mursi protesters - spokesman

CAIRO, July 5 (Reuters) - Egyptian troops did not open fire on supporters of ousted President Mohamed Mursi on Friday, an army spokesman said, after security sources said three demonstrators were shot dead by security forces in a protest near where Mursi is being held.

Well someone is lying.

Jeremy Bowen on the BBC reported, just after it had supposedly happened, that he had seen it happen. 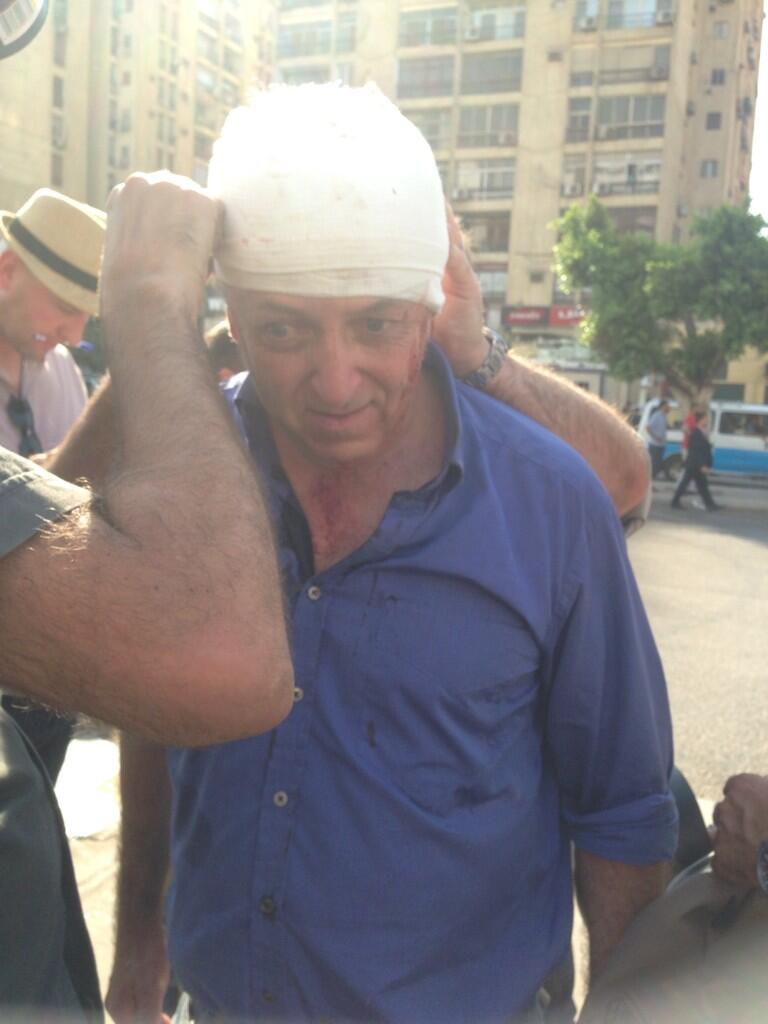 Egyptian soldiers have opened fire on supporters of ousted President Mohammed Morsi in Cairo, a BBC correspondent has said, killing at least one person.

Jeremy Bowen said the military had told demonstrators to stay back from the officers' club at the Presidential Guard building.

When the crowd surged forward, "someone opened fire straight away from the military side, before they used any kind of tear gas... I saw the body".


I heard him reporting exactly that live on TV.

It's all getting frightfully exciting.


You know something I have noticed, that is glaringly obvious for all to see around the world?

This is a clear indication of one of the major problems facing the people of Egypt and highlights why there was a move to remove the MB. They are a Taliban-like religious fundamentalist party dedicated to forcing their religious beliefs onto the majority, victimizing women, refusing freedoms and ignoring basic Human rights and equality.

This is why they needed a revolution. The MB DID NOT represent all of Egypt.

posted on Jul, 5 2013 @ 09:53 AM
link
If you expect to see mercy and tolerance, don't. This isn't a game to them and they are going after the people who damn near destroyed their nation right in front of them and inside a year or so to accomplish it. The grudge is personal, intense and deep. It's something we need to stay clear out of....refrain from judging with our over-eager Western values that get applied to every situation on the planet, and let them sort out their own hash.

It'll be ugly at times..but the Muslim Brotherhood is a very ugly thing they are removing from their society. Frankly, I was surprised to hear they captured so many alive as it is. They should have shot them as they found them. Leaving this group alive only invites more unrest later....again and again and again until they are killed. Sometimes? Well... It's a hard world where hard action is needed.


It's going to be, in a purely empirical way, very interesting to watch this unfold.

If the MB take the gloves off, then this could be spectacularly explosive. And if the military don't close them down quickly and completely this could run for a very long time.

And if there are any Twelvers in the MB in Egypt then it gets really, really exciting. It could be exactly what they want.

Originally posted by Wrabbit2000
refrain from judging with our over-eager Western values that get applied to every situation on the planet, and let them sort out their own hash.

I agree, but the US foreign policy of meddling in every nation around the world will not stop in this case. America cannot risk seeing Egypt go the way of Syria, and they will have to act to stop it if it looks like that's possible.

The problem is that people have now been shot, publicly, for all to see. Violent response from those in uniform ALWAYS exacerbates a bad situation and can easily turn a protest into a battle, with hundreds more joining in.

I'm watching the RT live feed, and where that is there seems to be fewer than 50 protestors and more than 100 military with armored vehicles blocking the road. I guess all the real protests are happening elsewhere, or maybe they have retreated?


The thing is.. This isn't the US we're seeing there. For all the apparent credit the US gets for being omnipotent and omniscient, I think they're about as confused and screwed up for a chaotic policy in that region as it gets right now, with no real coherent path to follow. Anything we're seeing with organization isn't American backed, IMO. This is what it looked like in 1989 too. Friggin U.S. Officials looked like Homer Simpson with a brain injury after it took bricks from the proverbial wall hitting them in the head as it fell to get the clue that the world was changing. lol...

If you find sympathy for Pro-Morsi people, and that's fine. We all see the world differently. I side with the Egyptian people and their Military...who, in a rare show of loyalty, have sided with the people themselves and not with the Government leadership that sought to direct them ONTO the people.

I agree that Uniformed use of force against civilians usually inflames a situation, but in this case? I don't think so. The Muslim Brotherhood *WILL* fight. The question is simply how far you let them come to killing you or others before shooting them on the spot. Apparently, to the Egyptian military, the line does allow some room? Just not much. It's probably how it needs to be while they sort their problems right now.


Egyptian troops opened fire on mostly Islamist protesters marching on a Republican Guard headquarters Friday to demand the restoration of ousted President Mohammed Morsi, killing at least one. The shooting came as tens of thousands of his supporters chanting "down with military rule" rallied around the country.
The shooting came when hundreds of Morsi supporters marched on the Guard building, where Morsi was staying at the time of his ouster before being taken into military custody in an unknown location. The crowd approached a barbed wire barrier where troops were standing guard around the building.


AP link
edit on 7/5/13 by anniquity because: typo and added info

posted on Jul, 5 2013 @ 10:28 AM
link
I don't think it is wise to start marching in big crowds chanting that kind of stuff to a place where there a bunch of guys with guns guarding it. Someone could get shot, maybe a stressed out soldier shot and more joined in. The soldiers have been doing pretty good over there with crowd control, they have some good soldiers. Let there be another election, the one that was elected last election was not a very good choice.

posted on Jul, 5 2013 @ 10:35 AM
link
But see the problem of weeding out the MB is a hard one its not like they walk around with shirts saying MUSLIM BROTHERHOOD! On them so to shoot people that are protesting as a group with them they could just be pro morsi and anti MB. It's a steep cliff they are standing on and its covered in gravel so at this point it only takes one rock to fall completely into chaos. I'm in support of the the revolution and anti morsi but innocent bloodshed is never a good thing in my book.

Originally posted by rickymouse
I don't think it is wise to start marching in big crowds chanting that kind of stuff to a place where there a bunch of guys with guns guarding it. Someone could get shot, maybe a stressed out soldier shot and more joined in. The soldiers have been doing pretty good over there with crowd control, they have some good soldiers. Let there be another election, the one that was elected last election was not a very good choice.

What happens if the result of the next election is the MB winning again?

Let's not forget, Morsi had more popular support than David Cameron at the election...

How will President Obama react to this?