This is the FIXED version which is exactly 136.1 Hz (or C# in 432 Hz. C# in 432 Hz has a .04 Hz difference). "The Swiss scientist Hans Cousto, author of the Cosmic Octave, discovered how to convert planetary cycles into musical pitches.

This is 136.1 Hz + it's relative Perfect Fifth, 2:3 interval (in pure tuning). The perfect fifth interval was considered by Pythagoras to be the most consonant interval. Since Pythagoras conceptualized the Harmony of the Spheres, he and Hans would probably have seen eye-to-eye on this.

This is pretty cool, it has an odd relaxing vibe too it, kind of reminds me of binaural beats.


Something is out of tune. You can hear it in the cycle of the wave.

Very interesting to say the least. I put it right up there with the sounds of the ocean.

The sound frequency of 432Hz was played to water and a water crystal formed. Compare the water crystals formed from this sound and thoughts and feelings of "I can do anything" (freedom). 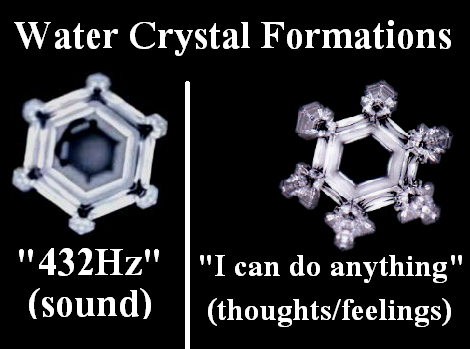 (In fact, now that I look at it again, the hexagon in the freedom crystal doesn't look as balanced as the "432Hz" crystal so this may be an even purer expression of freedom)

528hz is based off of a solfeggio scale, 432hz is based off of Pythagoras scale. Pythagoras was one of the greatest mathematicians. This 136.1 hz is C# WHEN A=432hz, so this also goes along with Pythagoras' scale. 136.1 hz was used since ancient times in India (they had tuning forks). It is called "The Om Tone". OM being The Sound of God in Ancient Hindu Scriptures.

Hinduism stressed the important of sounds which is why all of their prayers are short and sung (mantras).