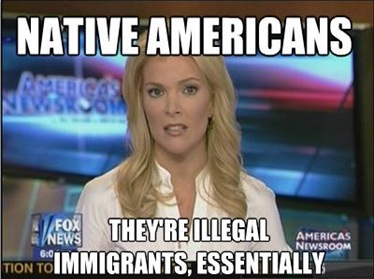 One can but assume that some US politicians are about of the same caliber when one considers that Sarah Palin did not know that Africa was a continent and has also a great lack of knowledge in other fields. They, more than likely, get much of their information from the same source, namely Murdoch’s Fox News.

Many ordinary Americans also suffer from the same or similar lack of knowledge as could be seen when the US embarked on its illegal war in Afghanistan. It was only good that the military leaders knew where the country was and could, more or less, read a map otherwise it might be Germany which would be under constant drone attacks, for that is where many placed Afghanistan.

Just sad isn't it? But this is the "FOX Nation" mentality, if your heritage isn't from Europe, you are here illegally. Apparently even the indigenous peoples of North America aren't even legal in this country as far as FOX News is concerned.

posted on Jun, 29 2013 @ 06:16 PM
link
If I recall correctly, Rupert Murdoch was accused of using his press holdings in Australia against the Aboriginal community as well. If true, it makes him a bit of a racist, doesn't it?

posted on Jun, 29 2013 @ 06:20 PM
link
I've not been able to find the entire comment she made and the context in which it was said, but if this is true....she is just another example of the arrogant stupidity many people have.

It's like the racist white guy that screams "go back to the country you came from", not thinking that his family immigrated to the US no too long ago.

This country itself is "stolen goods". The Europeans stole it from the Indians and now have the audacity to complain about immigration.

Irony at it's finest.

posted on Jun, 29 2013 @ 06:20 PM
link
anybody that thinks natives are illegals is an idiot that does not know anything about history

posted on Jun, 29 2013 @ 06:31 PM
link
Did this get said on TV and is it a quote? ...Or is this another out-of-context game?
Is she saying that they are citizens of their own nation I.E. within the confines of their reservations and not US citizens or is this just another TV idiot hanging on by her fingernails so that she doesn't fall out of her own ass?

By the way. I suspect Fox is only going all out on the moron front so that it can try to catch up with the parade of idiocy that is ABCNBCCBSPBSCNNBBCASOB and all of the rest of the US propaganda apparatchik.

As far as Native Americans are concerned, I imagine most of them have more sense than to listen to the crap that our country calls "news".


The only video I could find was this one, about "diversity training" where the trainer said "The pilgrims were illegal immigrants" and is making people at the USDA repeat this phrase during the "training" session.

Megyn Kelly, during that entire video did not say the words this article from BIN and Greenview imply she said.

I've watched it once over, and the only discussion is about a sensitivity training seminar, where the instructor was saying "Pilgrims, were illegal immigrants. They didn't give the native's their passports...etc"

It's ironic the original article is lambasting the media, and figures like Sarah Palin for being ignorant, yet they see a meme for this, and they report on it. Internet MEMEs are not sources of information.
edit on 29-6-2013 by boncho because: (no reason given)

Originally posted by neo96
Yeah well who is has been sitting on government reservations for over 200 years.

Huh? Your what hurts?

Let's take a look at the history like the history of this nation didn't exist for much of the time Natives were in America then came the Euros with the manifest destiny that conquered the natives created a country then waited few hundred years to make them citizens just like they conquered southern immigrants for decades, and then someone finaly decides make them a part of the conquering 'heroes'..

Home of the slave, and the land where your free to be spied on.

posted on Jun, 29 2013 @ 06:49 PM
link
reply to post by HauntWok
I don't know if what she supposedly said is accurate, what context it was said in, or if only part of what she said was used for shock content. I don't really trust "quoted" material anymore. If she did say something alluding to Native Americans being essentially "illegal immigrants" I'd like her to say that to my step-father's face. He was born on the reservation, fought in WW2 and Korea, and is a true American Patriot.

Even Native Americans who were granted citizenship rights under the 1924 Act, may not have had full citizenship and suffrage rights until 1948.


This appears to be the source article.

I am sure that a video exists somewhere, unless of course FOX News has scrubbed it from the internet which is completely possible.


Unfortunately, they have disabled comments. They bash ignorant media in their little rant, but their only source of Megyn Kelly saying this is a internet meme created by something like memegenerator.

The actual root of the claim is in a segment where Megyn was covering sensitivity training, and talking about whether or not money should be spent on something like that. At the training session, the speaker states that "Pilgrims were illegal immigrants."


Conclusion: Megyn Kelly did not say these words and this has no supportive backing besides an internet meme that anyone could create. The source video (which is nowhere near the accusation) is posted by me a few posts up.


In other words, this is a false claim.


I am sure that a video exists somewhere, unless of course FOX News has scrubbed it from the internet which is completely possible.


It does. Right here.

Originally posted by neo96
reply to post by boncho

Got to love the Neo's cuckoo logic, here... LOL

posted on Jun, 29 2013 @ 07:14 PM
link
I'm surprised Jon Stewart didn't know about this. He would have been all over it, not to mention all the other late night hosts.

posted on Jun, 29 2013 @ 07:15 PM
link
Well, I suppose the Blond Bimbo Brigade at Fox News has done it again. They proven that when you thought you'd seen the limits of stupidity, oh silly mortal, you ain't seen nothing yet. They'll even have more after a break, I'm sure.

I'm afraid one just doesn't cover this level of dumb. Nope... It's just not up to the task at hand. This takes a chorus.

The music is even nice and relaxing while considering just how dumb some people can actually be and still hold a career.

posted on Jun, 29 2013 @ 07:19 PM
link
reply to post by boncho
I get it....more liberal progressives trying to make conservatives look bad so nobody pays attention to what idiots THEY are. The supposed journalists are getting just as bad as the politicians.